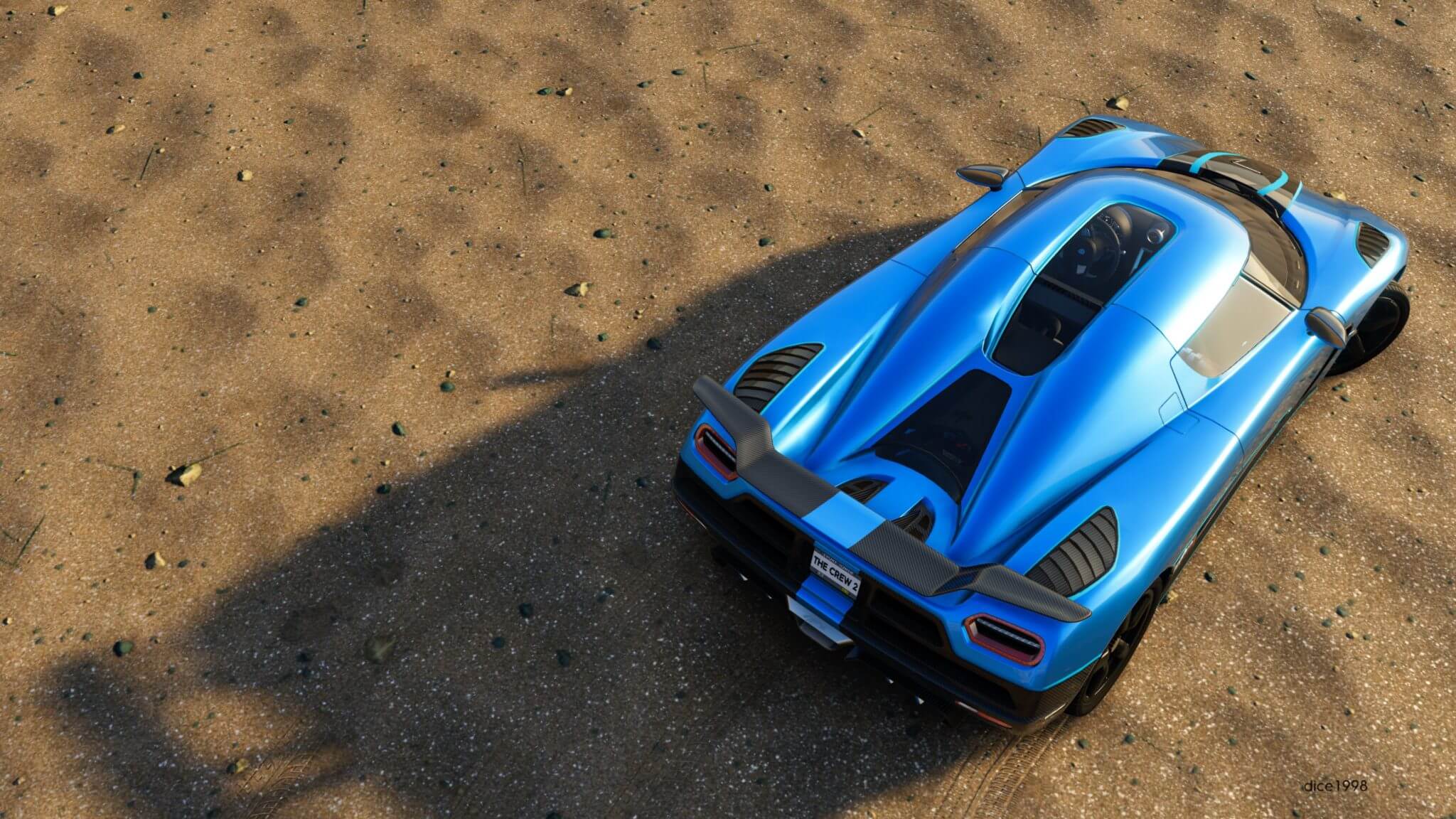 This article was published by Kyle Patrick (@SlipZtrEm) on December 15th, 2018 in the The Crew 2 category.

It's like a "jack of all trades, master of none" type of game. TC2 enables the player to do a lot of things, but nothing exceedingly well.

Alongside GTA, It is currently the go-to option if you want a sandbox game for motor vehicles.

I opened this article to get a link and see if my PC could run it (don't think it can) and my internet stopped.

That's a pretty big sign if I ever saw one.

"The Crew" is the only car game I've ever rage quit and deleted from my system.

I bought it a few years back, all in etc on a discount day. And I actually quite liked it, but really I didn't want to share my world with others, never mind not a major issue really.
I even won a few races, and yeay, I have parts. I slapped them on the ****box that I was driving. Little did I know that was it. Meh, other games are the same, shame though as they're hard-won parts.
Then along came some event stuff, can't remember what it was, that started popping up everywhere, and telling me to buy it. Nope, I'll play on.
But I wanted a nice car and some nice parts, and that's going to cost more, real money for cred points or whatever it was.

I could live with all of that, the hosepipe of purchase shoved down my throat isn't unique to this steaming pile of festering code dankness.

No, what got me to the point where I'll never buy another (s)crew game again was the damn pursuit mode rubbish. I saw it, no doubt it's the best thing for some, but I didn't want it. I was happily driving Ms Daisy around with a beer. But, and to the coders/marketing people who thought this was a good idea, I wish you extra foot cheese because as I boot up my (s)crew game it forces me to do an intro level. Which considering I was playing with shaking hands and through tears of anger, I failed at.

And that was when I deleted the game I wanted to play but couldn't because some officious money robbing goit at Ubisoft decided that I should use the game exactly as they decided, with no chance to bypass it and carry on with what I actually paid for.

So that, and then watching some poor souls attempt to play the whacked out (s)crew two made me realise that whilst not a sim snob I certainly don't want the electronic equivalent of wiping my butt on my PS4 with another version of the game...

Tried it out for a bit but the physics are complete garbage and so delayed so I have no interest in playing it any further.

I already own it. It's average imo and I get bored pretty quick. The only real thing going for it is the multiple vehicle types. I expected it would be an arcadey (didn't play no.1) game so the physics were not a surprise. It can take quite a while to earn money to buy cars, especially if you don't like fast travelling everywhere. Benefit of driving is finding loot boxes and gaining exp/icon points. The rubber banding was ridiculous (idk if it was fixed?) in some races. You only get one house which is on the East side of the US. If you are driving to a location on the other side of the map (Can take over half hr, depending on vehicle) and you need a coffee break, toilet or the door knocks whatever. You get kicked for being idle after 5 mins or so. When you rejoin you usually have to start back at that house again. I wish I could have a new house or 2. But so far the only way is if you buy the extortionate (over £30) season pass. Which as far as I can work out is just a house and 2 or 3? cars. Maybe an outfit to. You do get other cars. But only early access. Everyone can usually buy that car a week or 2 later.
K

For a long time, The Crew was my "zen" game. It was one of those games that I could always just throw in and play whenever I was bored. There were objectively better racing games out there, but doing missions and challenges in The Crew just felt soothing in a way that few other games did. I remember an episode of Extra Credits that brought up Destiny with regards to this, comparing it to Law & Order as something that only rarely actually excels at anything, but does everything just good enough that it's always reliable. As somebody who doesn't play many shooters, The Crew was that game for me. The map wasn't perfect (it had some big holes in it; you couldn't race down the Boston Freedom Trail, up to Cape Hatteras, or through a facsimile of Disney World), but by and large, it got the biggest parts mostly right, at least on a basic surface level.

The biggest problem I think it had was how shallow tuning was. The idea of five vehicle categories, one attached to each region, wound up being, I felt, a serious bottleneck that made tuning very restrictive, and led to some weird design decisions. (Why did street and performance cars have to be separate categories? Why did fullstock have to be its own category at all? Why were certain cars shoehorned into certain roles? Why was the East Coast, of all places, the home of dirt racing, and the South the home of the performance cars?) Plus, the system of acquiring parts was extremely dependent on random chance; sadly, I think this design decision was motivated by greed, given how friendly this system was to the most exploitative forms of microtransactions.

Also, oddly enough, I think that the graphical "upgrade" that the Wild Run expansion brought actually made the game look worse on the whole, and sucked out most of the unique texture of the different regions. The cars are more detailed, night looked more light night, and some areas like New York did look better with the new lighting and weather effects, but out in the countryside (which makes up most of the map), it ruined the aesthetic. Los Angeles and the deserts of the Southwest felt too lush. The snow-capped Rockies lacked the fog and winter conditions they had before. The weather system didn't account for the different climates of different parts of the US, meaning that Arizona is just as rainy as Louisiana.

Unfortunately, The Crew 2 simply took most of the problems I had with the first game and built on them, without doing much to build on the things I liked. The air vehicles simply offer you a great vantage point to notice the seams in the map design, like how New York and Washington are pretty much right next to each other. They added some suburban areas to flesh out the map for when you're seeing it from the air, but when you look at them from the ground and venture off the main roads into them, you can see them for the empty filler they are, slapped onto the map with little care; you can't actually race through those suburban streets unless you're a) driving a dirt vehicle, and b) crazy. Some cool areas, like the Ohio fairground and the Wisconsin military base, were removed from the map altogether, as was the Windsor skyline across the river from Detroit. Most of the snow has been removed from the Rocky Mountains, leaving the map feeling even more samey.

Overall, the impression that both games left me is that the developers were more interested in throwing cool stuff into their games for the sake of showing off what they could do than in making sure that all of those things worked together as a cohesive whole. They made a gigantic map of the US, but they didn't make it all that interesting. They created five separate ways to tune most of your cars, but they also made tuning into a grind. They added a weather system, but not a climate system to make it feel realistic. And of course, the driving model is pretty mediocre.

To me I think the biggest thing that TC2 did was to try and copy FH4.

I enjoyed TC1 because it had in game achievements and vanity plates, also factions. (Which surprisingly enough all 3 are missing on TC2)

I also enjoyed where you actually had to drive to unlock more of the map to fast travel.
Because after skills and the events what is really there to do?
PVP was done in a not so good way and I just think that TC2 went backwards where it should be called TC 1 and TC1 be called TC 2

I never raced anyone in TC1 because I don't subscribe to PS+/XBL without a good reason, so maybe that was what made that game, but to me TC2 is a clear improvement. Improved handling, better races, a better way to handle specs and parts, more polished visuals, more polished and cohesive environments (especially off away from the roads), and more than anything else, the underrated addition of planes and boats jetsprints. Not that the game excels at all these things, but TC1 set a fairly low bar.

It is true that TC2 lacks things to do and really needs to be fleshed out, and it's inexplicable why some things were stripped out from TC1 to TC2, but there's zero chance that I'd go back to TC1 over playing TC2 instead. For all its weaknesses as a wheeled-vehicle driving/racing game, TC2 has almost no competition for its other vehicle types, and the mix of them together with the Fast Fav function on this large open map is a delight.
Share:
Reddit Pinterest Tumblr WhatsApp Email Share Link