What was your favorite cartoon and series as a kid?

Some of the cartoons I remember growing up.


The list can go on and on with pokemon and all that, but that's a lot of the older stuff from back in the day that Jackington hasn't already covered.

*added bit* Did anyone ever see "Fritz The Cat" when they were younger??

I guess the Top 5 got thrown out the window....haha. Its funny looking at the people that were born right around when I was born in 81, the lists they have are almost exactly what I watched. The cartoons were so much better back then compared to the ones my kids watch now. All of the cartoons back then had a "moral of the story" deal going on, and allot of them told you the moral of the story in case the kids watching was that dense. They really don't have anything like that on tv now

I forgot about one of my favorite shows until my kids put the dvd in this morning, ALF! My son even has my old Alf 2 foot stuffed animal in his bed when he sleeps.

Off the top of my head and certainly in no particular order:

And if we count game shows

I was born in 1979, we did not have cable, I had to change channels by turning what we called "knobs" or "dials" on my TV, which used an "antenna" that we affectionately called "rabbit ears." We had four channels, when the Fox station would come in.

Hey, I watched Hee Haw and also Benny Hill all the time when I was a kid so no judgment here! Also loved Green Acres!

FoolKiller
we did not have cable, I had to change channels by turning what we called "knobs" or "dials" on my TV, which used an "antenna" that we affectionately called "rabbit ears." We had four channels, when the Fox station would come in.
Click to expand...

I still have no cable and use an antenna. Although the knobs have been replaced with buttons and PBS has 4 channels now...

Growing up the TV was basically always on Nickelodeon, it sucked that Cartoon Network wasn't on AT&T(which is what it was before Comcast took over).


There are probably a few I forgot.

TB
I still have no cable and use an antenna. Although the knobs have been replaced with buttons and PBS has 4 channels now...
Click to expand...

My mom still lives like this. Cable still isn't an option where I grew up.

The signal is always perfect...if you hold on to the antenna.

My brother constructed an aluminum foil net between the two at one point.

I can't remember much past these anyway.

Cartoons:
The Pinky and the Brain (favorite)
Animaniacs
The Mask
Sonic
Bugs Bunny

I also watched Dr. Quinn, Medicine Woman when I was younger.

EvilNeal
I have to agree with the other Awesome 1977 members although I think The Centurions deserve a mention.... Power Xtreme...ahem!
Click to expand...

Fascinating. I clearly remember that yet had no idea what it was called or even that it existed until you mentioned it.

Born in '76 in El Salvador. They restricted the channels, meaning there was no TV until 11am. So I had two hours prior to school to catch as much as possible.

After my son was born I started watching cartoons again 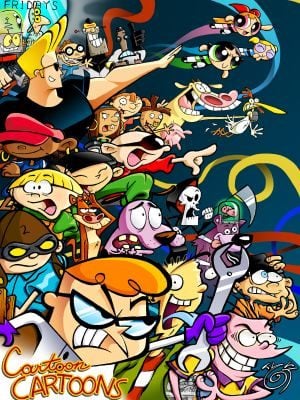 Famine
Fascinating. I clearly remember that yet had no idea what it was called or even that it existed until you mentioned it.

The toys were pretty good although not in Transformers league, what they did have in common was the shoddy advertising cartoon series.

Wizbit was weird, now I'll have blinking theme tune going road my head for the rest of the day!

EvilNeal
The toys were pretty good although not in Transformers league, what they did have in common was the shoddy advertising cartoon series.

Wizbit was weird, now I'll have blinking theme tune going road my head for the rest of the day!
Click to expand...

What theme tune? This one?

Famine
What theme tune? This one?


​
EDIT: So it's just me that loved Trap Door? The game on the Amiga was awesome

...obviously it's not just me that remembers it!

My favorite shows growing up...

I'd put an honorable mention to the 90's Spdier-Man and X-Men since they were fun to watch as well. And if the Mario Bros. show had shown more Zelda eps that would be in the list as well.

As a toddler, I really liked Thomas the Tank.

TB
I still have no cable and use an antenna. Although the knobs have been replaced with buttons and PBS has 4 channels now...

It all depended on where we lived if we had cable or not, we never could afford it but if it was just unhooked at the house and not on the pole then we would have it soon after living there

Most of the time I was in section 8 and we would catch the cable guy and pay him 50 bucks under the table to cut the cable on, we were never turned down and always had cable when in section 8. Money corrupts all in this world I suppose.

It's a G thing

and a bunch of retro stuff

1. The Muppet Show
2. Star Trek: The Next Generation
3. Matlock (Don't ask me why, but I loved Matlock as a kid. Still do, but I still don't get why I loved it back then.)
4. Dinosaurs
5. Family Matters

There are a bunch of other shows that I thought were pretty good, but really didn't start loving them until I was around 13 years old. Stuff like Johnny Bravo, Dexter's Laboratory, Rugrats, The Mighty Ducks, Justice League, Top Cat and Swat Kats were all either things that I liked as a kid but started loving them when I rewatched them when I was a little older or didn't grow to appreciate until I was almost a teen.

No one watched Big Foot and the Muscle Machines?

Or Rubik, the Amazing Cube?

Or Challenge of the Gobots?

GoBots were just Kmarts brand of the Autobots, come on man! lol

I watched a lot more cartoons than these, but these are from my childhood.

Forgot about Scooby Doo...I watched plenty of that.

Crooooooow
Spongebob I used to watch, but now since season 4, he's started to annoy the 🤬 out of you. They don't put much creativity into the show anymore. Except a few special guests once in a while.

Cartoon Network - We put the reality in cartoon.
But I used to watch Toonami was it? Action packed Cartoon Network, with Dragonball Z, Swat Cats, Big O, Samurai Jack. But now they have been canceled. So, Ladies & Gentlemen, please welcome the new Cartoon Network style... REALITY & NONSENSE!
This makes no sense at all. Now kids these days will have terrible imagination. I'm guessing Disney bought Cartoon Network a few years back, but we didn't even notice the new owners. Same thing with Nickelodeon.
It seems... I keep trying to escape..... but they keep pulling me back in.
Click to expand...

I think Big O is still shown on Adult Swim, during their Saturday night Anime line-up.

However, like Cowboy Bebop, I think it's only shown when one of the shows has run through a full season.

Of those, my favorite was UFO Grendizer. Daimos a close second.

On TV, we still got a lot of replays of Rocky and Bullwinkle. Which I think is the best.writing.ever. in a cartoon. Pun-ishingly so.

Aside from that, the usual suspects, He-Man, (and the ripoffs, Galtar, Blackstar, Thundarr, etcetera...) Thundercats (and Silverhawks, but Thundercars were better, and first), etcetera. I have a lot of the old Transformers episodes... can't find the Gobots. The Centurions were extremely cool... impossible to find those toys now...

I have a soft spot for Chuck Jones's Tom and Jerry toons. Groovy stuff.

Something I have not seen mentioned yet... anybody know The Mighty Orbots?

How about Bionic Six? (okay, this one was horrid... but it had a snappy intro and a chick in skin-tight leotards)

One that didn't last for very long, but had good production values:


(haven't seen this mentioned. Honestly... only thing I remember about this one is the intro music.)

Damn was that a long time ago.

I was going to ask why you didn't include Thunderbirds in your list of puppet shows... until I saw it further up in your post. 👍

So... nobody else had the Captain Power toys that you fired at the screen during the show?

(I have never been more in love with youtube!)

I suppose I should mention that I started watching The Simpsons around the age of nine of ten. I'm sure most of the jokes went right over my head, but I still loved the show. Back when it was still in it's prime. The new seasons are pretty funny, but they will never be as good as it was back then.

My favourite was definitely Battle of the Planets.

This thread is like poking a giant with a tootpick really, kids watch cartoons non-stop when they're young, so naturally we all watched far too many to count!