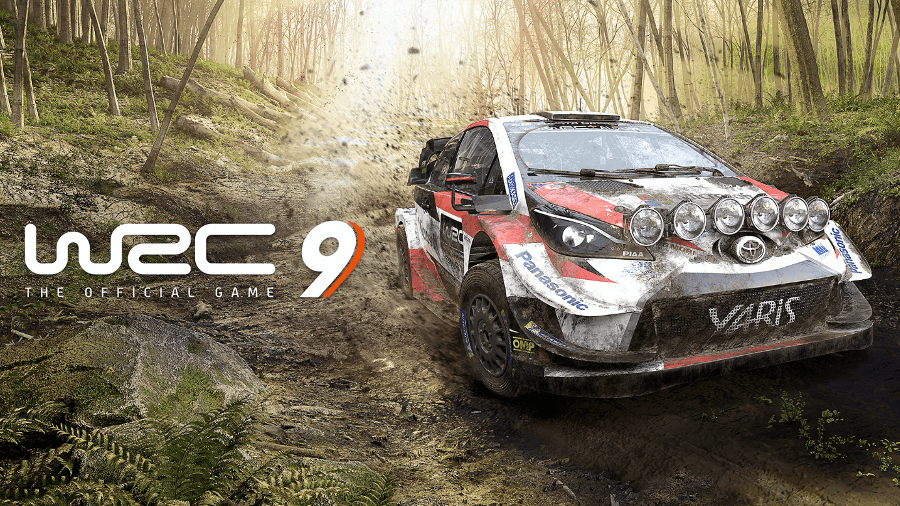 WRC 9 Launches, to to Positive Reception and Reviews

This article was published by Andrew Evans (@Famine) on September 4th, 2020 in the WRC Series category.
Last edited by a moderator: Sep 4, 2020

I haven't been able to connect to Clubs. Anyone else having that problem?

The article says, "Depending on your region and platform, WRC 9 will likely be available right now. Save for console users in North America, who have to wait until September 8", however, I can say for sure it's out today (September 4) in the United States for PS4. I believe Canada is the 8th (possibly Mexico?). Edit: Out September 4 for Deluxe Edition users, my bad.

In any case, looking forward to this after work. If I can get away from Tony Hawk remake.

Thanks for the mention and posting the review 👍

SPhilli911
The article says, "Depending on your region and platform, WRC 9 will likely be available right now. Save for console users in North America, who have to wait until September 8", however, I can say for sure it's out today (September 4) in the United States for PS4. I believe Canada is the 8th.
Click to expand...

The console Deluxe Edition is out in North America today, with the early access it affords. However the game's official release date on consoles in North America is September 8, as communicated to us by Nacon's PR firm (which did offer us a review code, but not to the right person so we missed it

This is also confirmed by the PS Store, which has the Deluxe Edition available, but the regular version as Pre Order: 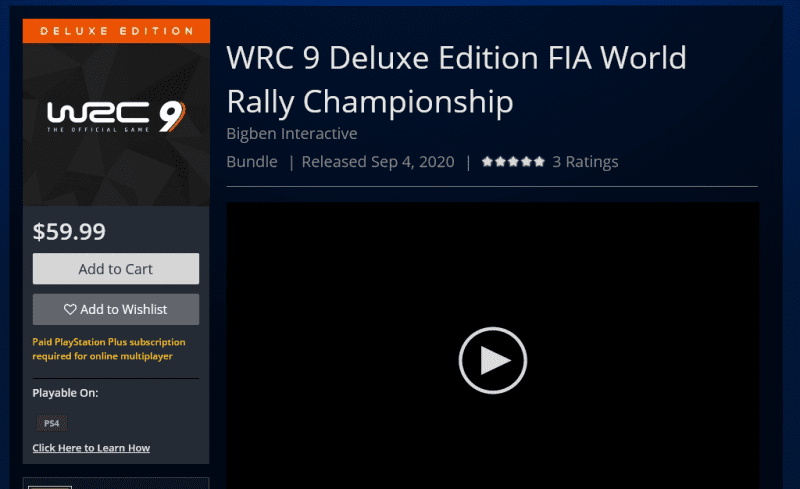 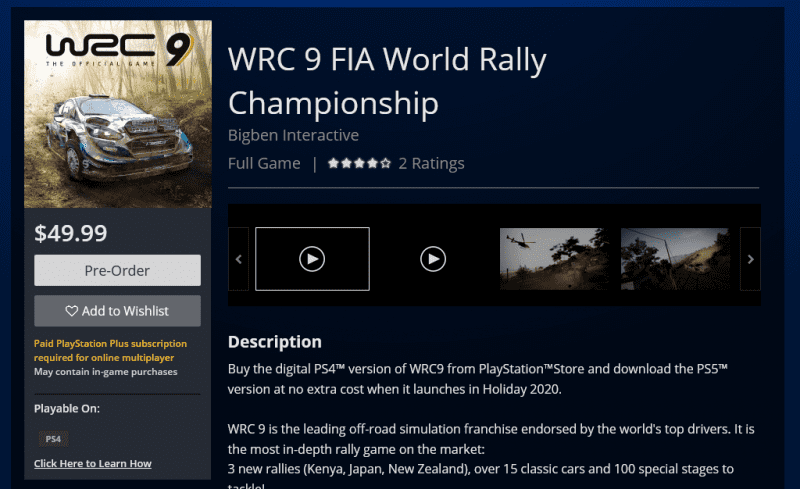 Famine
The console Deluxe Edition is out in North America today, with the early access it affords. However the game's official release date on consoles in North America is September 8, as communicated to us by Nacon's PR firm (which did offer us a review code, but not to the right person so we missed it

I did not know I bought the Deluxe Edition! I stand corrected, thanks.

Not bad but not revo jump.

So its the total opposite of Project cars "3" aka not a total mess of a game and a total middle finger to the players.

Getting this for PS4 when it comes out.

WRC 8 & now 9 definitely aren't bad looking & they have nice car selections but it's still a shame for the officially licensed rally game to miss out on names like Subaru & Mitsubishi. Had my hopes up when they announced a classic car selection for WRC 9 but still no sign of them. I want to swing a classic Impreza round these great stages.

KT never did get around to releasing WRC8 on disc here,Used disc's are still $70 so,
Have sent detailed instructions on how to insert disc into suitable round orifice.
Will wait for CM's WRC .
UpDate:
Have been offered a copy (WRC9) by a community member who is kind enough to post it to OZ.
If your reading this KT/Bigben you still blow.
Last edited: Sep 7, 2020
T

tunaphis
KT never did get around to releasing WRC8 on disc here,Used disc's are still $70 so,
Have sent detailed instructions on how to insert disc into suitable round orifice.
Will wait for CM's WRC .
Click to expand...

Yeah, I don't get that. We Aussies love motor racing!

For some reason you can get Switch carts of WRC 8, but no PS4 discs?!

It's a pretty good game so far which I've bought it from Epic Games Store for PC.

Hopefully on nextgen consoles all racing devs will be able to target 60 fps. 30 fps is not enough for precise racing.

Sorry to keep spamming the link to the GTP league, but I think we are close to getting going.

Remember that these are seven day events and you do the rally when you can. This is NOT a live online competition. So there are no dates/times set. You run when you can.

Here is the signup thread: https://www.gtplanet.net/forum/threads/gtplanet-wrc-9-league.395705/

Two updates in one week

SimTourist
Hopefully on nextgen consoles all racing devs will be able to target 60 fps. 30 fps is not enough for precise racing.
Click to expand...

It's even better. I haven't played any WRC because of 30 FPS and now I can play in 120! So good. I am a bit sad they lost the WRC license. But we should get some great games before it I guess.
J

Had a 2nd crash to ps4 front end again, only game that does this in about 200 games i have.
Bit lame from KT to me.

Im adjusting to the game in general coming from 8. The sound of legend and bonus cars is a million times better vs 8,

also volume balance much better, sound effects like impacts more appropriate, and vary depending on speed, like puddles now in 9 dont sound like a shotgun blast when you go thru it slowly, and with reasonable sound when faster.

I can appreciate the weight transfer difference especially on tarmac and with more modern cars like in bonus section, with maybe not as super firm and grippy stance as current wrc cars.

The wrc2,3 feel is great too, just sounds are lame still for those, weird how they can do good sounds for other cars, maybe its a license thing i don't know. And they all sound alike, same for top wrc class.

They feel good though, not overly done like in 8 maybe to me. But sound makes it uninviting for me to use much these current wrc classes.

Shame as you have to to do a career, season and cant do custom seasons, rallies, and with any car too.

I like japan quite a lot, tarmac i prefer now in 9, especially if a little bumpy and with connections to other roads etc.

The newer stages of 9 seem to run slower and at a lower resolution, especially in sun with shadows at least, or with dynamic weather.
I am still on std ps4.

Not a fan of Kenya, new zealand is just ok, just bumpiness makes it a little more interesting.

Anyhow, would love to try the further improvements in feel and ffb of 10, probably I'll wait to see how generations turns out, and content wise.

Still glad i got it as an upgrade from 8, mostly for sounds of bonus and legend cars, with a few extra cars too.

Maybe i should have got 10 vs 9, but if ever generations doesnt have the full older rallies, at least I'll have them in 9.

Edit: also glad to see the game doesn't reset you the instant you get off road.
Except if you fall off a cliff etc, then it resets you before you even crash down, with zero damage lol.
I know in career you can set permacrash, but in single stage play you can't.

Edit: im liking the co-driver in 9.
Did start a season with a wrc3 car, in monte carlo, having a good time, good fun feel.

My meteorologist sucks though hehe, 99% chance of snow or rain, i put on wet tires and its dry all the way lol, ai seems to have an advantage in that case maybe, not sure.
I don't mind that much.

I wonder if you can ever use any bonus or legend car in season after having done other classes?
A shame really if not, all these nice cars and with better sound, only to be used in single hot times stages, maybe a license thing, hope they can add this really in generations, idon't know..

I noticed sometimes the replay roadside tv cam has a wide fov making the car passing by look unnaturally fast, which can be deceiving, making it look less realistic than it is.
Just a detail but can give a wrong perception of how the game feels and is actually pretty realistic to a good point.

Also a shame the handbrake isn't analog, i read it is in 10 finally?
Same for the clutch it seems.

Animations are better in replays vs 8, suspension movements, and damage too.
And the sound in tv replay for most legend and bonus cars are so much nicer than in 8, makes it fun to watch now, not so much the current wrc modern cars but they still have also great backfire and high revving sound when downshifting, etc.

Just too bad the longest stages like montecarlo epic don't have a replay on std ps4, i wonder if 9 on ps5 upgrade has?
And 10 on ps4?

At lesst the ps4 version of 9 has ps5 upgrade included.
Edit: changed my mind on new zealand, one of my fav now even, pretty cool.
Glad i got the complete version with 9.

The legend cars are much better to me vs in 8 too, not just sound, lot of fun.
Can't believe how the sound improved from totally inept to awesome, more reactive ,and believable.

Edit: tried the new neste finland, pretty fast stages, with the alpine.
What a difference it makes to have better weight transfer, sounds, replay animations, so much better vs 8.

Can feel better the handling on landing jumps, and when stuck on a groove on the side of road, shearing you away from your line, and then the weight shifting, and having to try manage to stabilize it.
Just the still lack of inertia shows with so short skidding to a halt in what looks like maybe 30 feet from going over 100mph just before losing it.
If I'd rate 8 vs 9 just like that id give wrc 8 a 7.5, and wrc9 a 8.5 in comparison. I'd give it a 9 if just for handling, feel, sounds except for current wrc,2,3 cars, stages.

Things i find a little lacking is like i said the inertia on braking, skidding, and easiness to not lose a skid at lower speeds especially, not enough inertia, momentum it feels to me.

Also lack of custom modes, being able to do seasons with any car, and chose all stages etc.
Weird that you can do a club custom rally with any stage, car, location, but for online only, no ai it seems.

Also, i dont know if it's accurate but older cars all have really weak brakes.
And ffb is really different in modern wrc cars vs other ones etc, really light feel.
Last edited: Jul 22, 2022
J

Well i just noticed now that the handbrake is analog in fact in wrc 9, goodness, well that's a great find for me.
I set it to my clutch pedal.
J

I only recently thought to set my tv brightness higher, about 25 clicks higher, so that it's less dark in this game.
It be good if there was in game setting for it, since i only need set it higher for this game.

At least now it looks sunny. Can see much better, in most situations, and it looks nicer.

Some rallies are so nice, Portugal, Italy, mexico, and Argentina especially.
Glad they will be back in generations.

Im surprised how the wrc, wrc2 current classes in wrc9 feel good, reactive, with enough inertia. They slide enough etc, more than old cars it seems. Edit: but with a weighty feel too.
Good feel and challenge on bumpy tarmac especially.

Edit: in replays too, you see better animation,movement of suspension and weight with wrc, wrc2 cars.
Much better than i remember in 8, they felt a little arcadey, especially the top class.

Legends feel good too,and unique, i noticed the fulvia, escort and alpine sound pretty much the same, at least it's a pretty good sound.