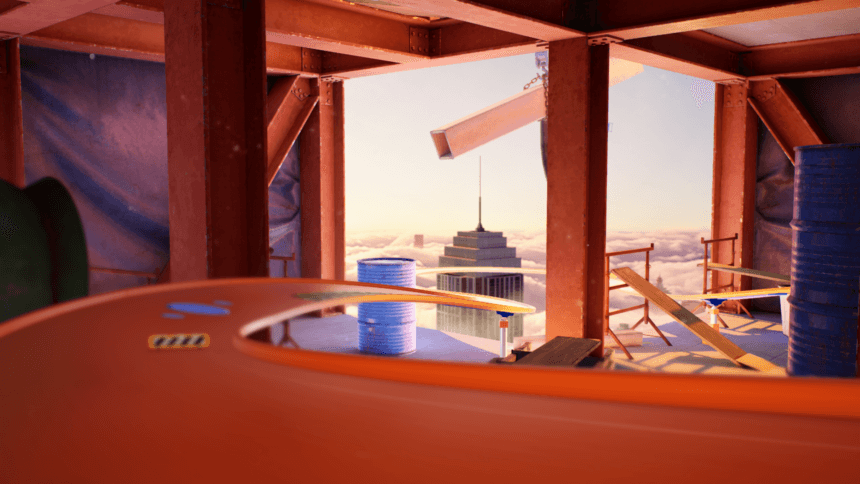 It’s less than a month since Milestone gave us a first look at Hot Wheels Unleashed, an arcade racer based on the immensely popular model cars, but already we have a second video of the game in action.

In case you need reminding, when the game launches later this year, it will feature 40 different circuit layouts based in six enviroments. The first clip showed off the Garage environment, with the famous orange track winding through various giant automotive obstacles. Today’s fresh look at HWU shows a second setting, with the Skyscraper environment.

This section of the Hot Wheels world features multiple levels of a tower block under construction — like racing around in Die Hard‘s Nakatomi Plaza. The track runs through three different floors of the building and even weaves outside to get the heart rate up.

As well as the orange track and speed-up pads we’ve seen previously, the Skyscraper video also shows a section of the circuit where the cars go upside-down. Special gray markings seem to indicate an area where the laws of gravity don’t apply, perhaps magnetized to stick the diecast cars to the road.

In addition to the new environment, the game play clip also reveals six more of the 60 cars available in the base game. Boom Car, Bump Around, Buns of Steel, Fast Gassin, Sandivore, and Mountain Mauler join the six cars we saw in the Garage video earlier this month — though we did catch Boom Car in the very first reveal clip way back in February. It’s still pre-Alpha, but should be representative of the final game content.

Hot Wheels Unleashed will be available for PlayStation 4 and 5, Xbox One and Series, Nintendo Switch, and PC via Steam and Epic, on September 30.

Hot Wheels
72 Comments Discuss this post in our forums...
Test Your Badge Knowledge With Our Car Logo Quiz