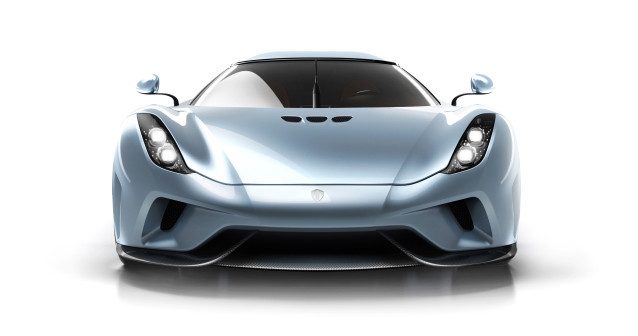 Koenigsegg made waves last year at Geneva with the Regera. Billed as the “more luxurious” relation in the Koenigsegg family, the car had all sorts of impressive bullet-points. 1500 horsepower! Three electric motors! A single gear!

For those keeping score, that battery-assisted total output trumps even the One:1’s massive amount by roughly one new Miata’s-worth of ponies. That particular Koenigsegg was the one to receive gaming attention in 2015, arriving in both Forza 6 and Driveclub, but it looks like 2016 will be the Regera’s year, based on this Facebook post from Koenigsegg themselves. What’s especially curious about the post is the edit history: 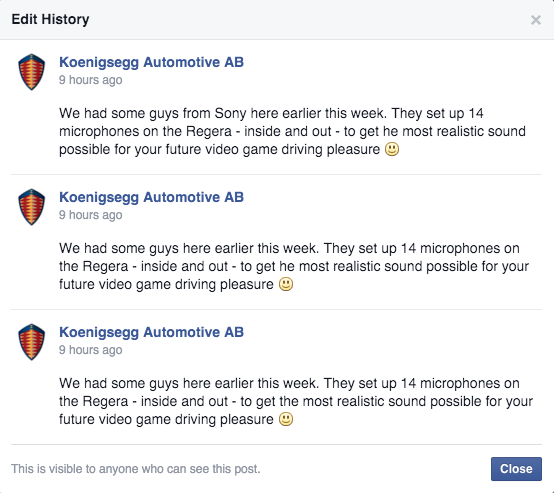 Why Koenigsegg removed the Sony reference we don’t know, and unless there’s a major racing game in development for the Vita, it’s safe to say this is for a PlayStation 4 game. What we do know is that Polyphony has a studio in Amsterdam, while Evolution Studios (the makers of Driveclub) are based out of Cheshire, England.

Driveclub already includes the afore-mentioned One:1, as well as the Agera R. It stands to reason adding another one of Christian’s creation to the lineup would be easier given the existing relationship. There’s no arguing it’d be right at home amongst the other exotica, too.

On the other hand, Evolution’s Alan McDermott – Audio Manager for Driveclub – has gone on record that the team uses “upwards of 16 mics,” which doesn’t jive with the Facebook post.

Could it be for Gran Turismo? Koenigsegg is one of the more prominent names yet to feature in the franchise, and Polyphony do have a penchant for including technologically-advanced models.

Whichever game(s) the Regera ends up in, we look forward to hearing it, and taking it for a digital spin. What about you? Share your thoughts in the comments below.

Andrew Evans · Feb 20, 2016· Comments
An announcement on the PlayStation Blog Japan has revealed that Gran Turismo 7 will be one of the games available in a special PlayStation VR2 event in Tokyo next month.

Gary Slater · Feb 20, 2016· Comments
January may be in the closing stretches, but Winter has returned for another round in Forza Horizon 4. Through the blizzards and the snow drifts, everyone at the UK festival continues to battle through the elements in order to seek out the latest events.

Andrew Evans · Feb 20, 2016· Comments
Playground Games has previewed the next Series of Forza Horizon 5 — Japanese Automotive — in its latest Let’s Go stream, revealing what people will be doing, building, and winning when it gets underway on February 2.

Michael Leary · Feb 20, 2016· Comments
Although Playground Games has yet to announce the Forza Horizon 5 Series 17 update, it’s already confirmed that Series 18 will feature a tribute to the late Ken Block.

Andrew Evans · Feb 20, 2016· Comments
Quirky rally title art of rally is now available as a physical, boxed title for PlayStation 4, PlayStation 5, and Nintendo Switch owners, with some cool bonuses for buyers of either the base version or Collector’s Edition.