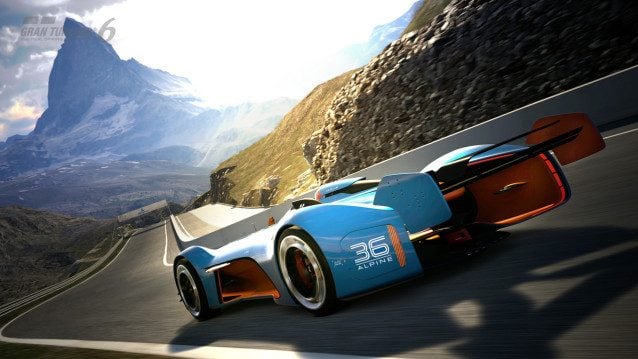 Walk down the toy aisle of any discount department store and you’re bound to find merchandise based off the hottest properties in gaming, from Minecraft to Halo. Strangely however, racing games have always been somewhat isolated from that phenomenon — or at least until very recently. Last year, both Gran Turismo and Forza partnered with Hot Wheels on multiple occasions to release lines of diecast cars from their respective series.

Now it appears French toy car company Majorette has also joined the action with its very own set of 1/64 scale Gran Turismo-branded models. This collection features six Vision Gran Turismo cars, many of which are debuting in miniature form: 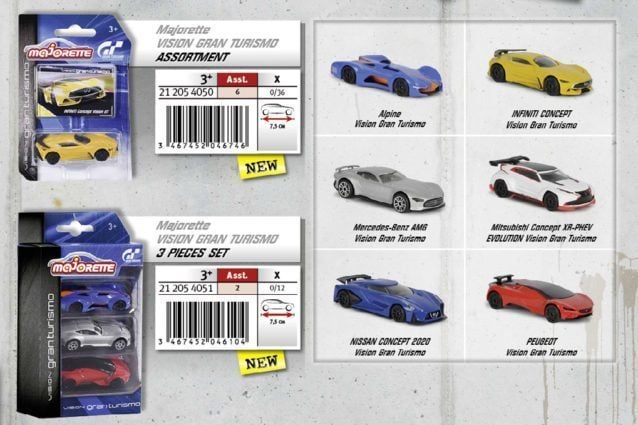 The Nissan Concept 2020 was the lone Vision GT car in Hot Wheels’ lineup last year, and had also seen a release by Tomica Limited Vintage for the adult collector market. Similarly, Norev recently introduced the Peugeot and Alpine in 1/64 and 1/43 scales, respectively. For the rest of the lot, however, this is the first time the Mercedes, Mitsubishi and Infiniti have been made widely available.

Granted, depending on where you live, they might be difficult to track down. Unlike the ubiquitous Hot Wheels brand, Majorette isn’t distributed in the United States. Quite a shame, considering the company has some pretty amazing models planned for the year that even Mattel hasn’t gotten around to yet — like a Porsche 934, and a Volkswagen Polo World Rally Car.

The new pack’s heavy focus on the Vision GT initiative is appropriate, given that all of the cars listed are expected to make their way to GT Sport. Majorette’s renditions appear to be of a higher quality and accuracy across the board than most other 1/64 scale models, which makes their absence particularly irritating for American Gran Turismo fans.

While last year’s roster of GT-inspired rides was a smattering of different eras, body styles and manufacturers, this new line showcases a number of concepts that wouldn’t exist without the racing game franchise. Still, we hope one of these companies goes back to the well like Hot Wheels did for the Jaguar XJ220 LM and resurrects another icon of retro Gran Turismo titles. The demand for a pocket-sized Castrol Tom’s Supra has been ignored for far too long.

Thanks @RCKakashi14 for the tip!

Andrew Evans · Feb 10, 2017· Comments
An announcement on the PlayStation Blog Japan has revealed that Gran Turismo 7 will be one of the games available in a special PlayStation VR2 event in Tokyo next month.

Andrew Evans · Feb 10, 2017· Comments
There’s a new set of Gran Turismo 7 Daily Races now available for the next seven days, and an entirely new experience in one of the three events as dynamic weather makes its online debut.

Andrew Evans · Feb 10, 2017· Comments
Kazunori Yamauchi has confirmed via a post on the PlayStation Blog that Gran Turismo 7 will come with almost total support for the PlayStation VR2 hardware when it launches on Feburary 22.

Andrew Evans · Feb 10, 2017· Comments
PlayStation has published its annual top 20s of games downloaded from the PlayStation Store, and Gran Turismo 7 ranks among the highest — at least on PlayStation 5.

Andrew Evans · Feb 10, 2017· Comments
The schedule for the next stage of the Gran Turismo 7 Online Championship has been revealed, with another short Exhibition Series to occupy players ahead of the official 2023 season.