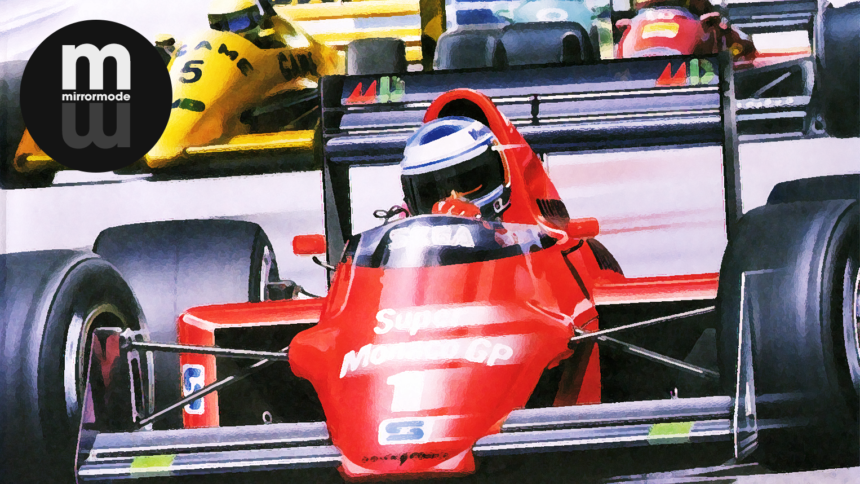 For this installment of Mirror Mode, we celebrate the upcoming release of F1 2017 with a look back at one of the most influential F1 games of all time.

Thirty years ago, Formula One fans didn’t have many convincing ways to live out their fantasies. There were some top-down racers, and other titles that scaled two-dimensional sprites to achieve a rudimentary 3D perspective before polygons were possible.

In most cases, these were flat experiences — literally and figuratively — with few trackside details and minimal elevation change. The view was typically from behind the car, high above, separating the driver from the action on track.

Inevitably, the technology caught up, as it always does. The result was a wave of experimentation from across the industry. Seemingly everyone from Sega to Namco to Konami and even Capcom traded blows developing game after game loosely (and, in a few cases, illegally) based on the highest level of international motorsport.

Some incredible racing games were born in this period, starting in the late ’80s, lasting into the polygon boom of the early ’90s. But if you wanted the full experience, you had to go to the arcades. If you were lucky, you found Super Monaco GP, in its iconic McLaren-colored cabinet, waiting upon your arrival.

Welcome to the Next Level

The likes of Pole Position and OutRun showed the world sprite scaling was viable, but Super Monaco GP demonstrated its fullest potential.

Sega moved the perspective down into the cockpit, for a much deeper sense of immersion. Meanwhile, the significantly more powerful hardware could push a barrage of visual information toward the player at an unprecedented and blistering pace.

Even today, Super Monaco GP is a punishing racer that demands your full attention. And although any discussion of physical realism is irrelevant by today’s standards, there is something uncannily authentic about the way it moves and looks. Sega captured that terrifying sensation of going too fast through the streets of Monte Carlo. All these years later, the tension still somehow comes across.

There’s only one track: a totally re-imagined take on the world-famous venue. But it’s obvious the developers lavished an absurd degree of attention on it. There are tunnels, overpasses, gargantuan hills, rocky cliffs, and loads of banners and buildings. Sega fit this all into a lap that was over in 80 seconds.

Preparing yourself for the next corner is nearly impossible when there’s so much to steal your focus from the road. Super Monaco GP may lack the photo-realism of more modern F1 titles, but it makes up for it with an abundance of character. This was a tribute to one of the legendary eras of the sport, immortalized with the best technology available at the time.

The arcade version of Super Monaco GP is a profoundly simple yet thrilling experience. First, you set a lap on a shortened version of Monaco to determine your position on the starting grid. Then, you race. You’ll face 20 rivals, but finishing isn’t enough — you’ll have to stay above an elimination threshold throughout the entirety of the race to cross the line.

That constantly rising “position limit” is the game’s stand-in for a typical timer. As far as arcade games go, it’s a nice break from tradition. It’s a chilling sight to be on the bubble, with the next car to be eliminated bearing down in the rear-view mirror.

Many pre-3D racers can feel unfair in a modern context. The combination of fast-moving sprites and low draw distances at ground level makes it almost impossible to read what’s coming. Thankfully, Super Monaco GP’s handling is responsive enough that a bit of memorization is all you need to put in a decent run.

It also helps that the framerate and scaling is super smooth. Sega had perfected its underlying Super Scaler technology over a period of five years, beginning with Hang-On in 1985. By the time Super Monaco GP debuted, the company was a master of the art.

A Breakthrough of a Bygone Era

Many likely missed the opportunity to try Super Monaco GP in the arcades. Fortunately, the home version for Genesis/Mega Drive was one of the most popular racers of the 16-bit era. Sega’s console could never match the visual output of it’s state-of-the-art arcade boards. Luckily, it kept the driving mechanics as true to the original as possible while fleshing out a deep, almost story-driven campaign mode.

Super Monaco GP clearly wasn’t an FIA-licensed product. Nonetheless, the depth of the World Championship experience in the home port meant it didn’t matter. In this mode, your goal is to win back-to-back driver’s titles. The season is 16 races long, and, unlike the arcade version, each round takes place at a real-world circuit. Along the way, you have the opportunity to name rivals on other teams, and steal their seat if you repeatedly outperform them.

If you manage to win the championship in your first year, you’ll start your second with a bit of surprise. An almost-unbeatable Brazilian up-and-comer challenges you to a race for your job. Lose, as you likely will, and you’ll spend the rest of the campaign trying to catch him in an inferior machine.

His name? G. Ceara, though you’d probably recognize him better by his identity in the sequel: Ayrton Senna.

Released in 1992, Ayrton Senna’s Super Monaco GP II was a worthy successor to the original. The three-time world champion even helped Sega with development. Though, being a home console exclusive, it couldn’t really push the technical envelope.

That would quickly change, however. Later that very same year, Sega released Virtua Racing, its first polygonal racing game. Although Namco beat Sega to the 3D market with Winning Run in 1988, Virtua Racing was a monumental leap forward in terms of design, gameplay, and computer graphics.

To outsiders, it was an industry-disrupting technical achievement. To Sega, it was the culmination of years of doing so much with so little.

For a decade, racing games thrived on the illusion of layering, scaling, and rotating 2D elements to create 3D space. Quaint as they may be by today’s standards, these experiments paved the way forward for the genre. And Super Monaco GP stands among them as one of the shining achievements of a long lost era.

Gran Turismo Sport 3812 Jul 1 by Andrew Evans
The second stage of the official Gran Turismo Sport 2020 FIA Online Championship comes to a close this weekend. That means we’re only a few days away from the third…

Forza Horizon 4 6 Jun 29 by Gary Slater
Playground Games has given us a preview of the next update for Forza Horizon 4. After unforeseen circumstances and a technical hiccup disturbed the release of Series 23, the livestream for…

Project CARS 3 692 Jun 26 by Andrew Evans
With just two months to go until Project CARS 3 arrives on our consoles and PCs, Slightly Mad Studios has started a developer blog to give some insight into the…