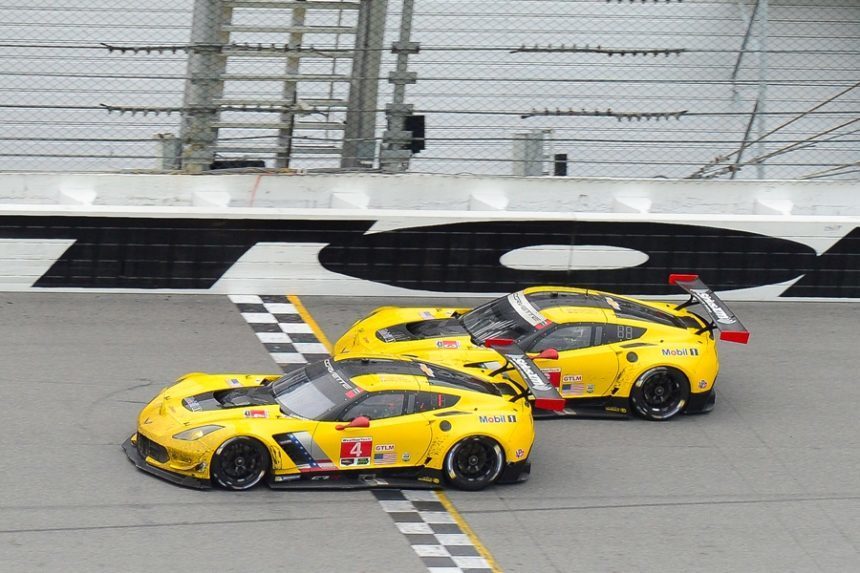 A fight to the finish was what fans wanted last weekend, and receive one they certainly did. As the season opener, the Daytona 24 served as an excellent sign of things to come, a day-long sprint with record-setting wins in the Prototype and GTLM categories.

Up top was Honda, scoring their first overall Daytona victory. 22-year old Luíse Derani would take the car across the line – his co-drivers being Scott Sharp, Ed Brown, and Johannes van Overbeek – with the Corvette DP of Wayne Taylor Racing nabbing silver with Max Angelelli behind the wheel, only 26 seconds later. Angelelli would later be taken to the hospital, after co-driver Jordan Taylor complained of an exhaust leak in the cabin, but reports have since confirmed the Italian is in good health.

The Honda had started at the front of the grid, on the outside, taking an early lead before being passed by both another Honda and the Deltawing. The latter even spent time as overall leader before succumbing to yet more bad luck, as an impact with a stalled car damaged the Deltawing beyond repair.

Two more Corvette DP’s – VisitFlorida Racing (#90) and Action Express Racing (#5) – would go on to finish third and forth, respectively, while the Ford EcoBoost DP #01 car would round out the top five. Its sister car, last year’s winning #02 car, would finish seventh in class.

Down in GTLM, the race was anybody’s game. At the 20 hour mark, the top five teams were still all within a minute of one another, with the two Corvette C7.R’s leading for much of the race. At the start of the final hour, the #912 Porsche 911 piloted by Earl Bamber was out front, but Oliver Gavin made his move in the #4 Chevrolet with a little over half an hour left. Shortly after, Antonia Garcia had muscled the #3 Vette past the German car too, and an all-out battle followed. A thrilling back-and-forth right down to the end, the Gavin/Milner/Fässler team would emerge victorious by a margin of only 0.034; the smallest gap in Daytona 24H history!

Bamber would retain the podium spot at the checkered flag, bringing the 911 home ahead of the pair of new Ferrari 488’s, with the #68 Scuderia Corsa car in fourth, and the #62 Risi Competizione car in sixth. Sandwiched between the cavallino rampante, the big BMW M6 GTLM debuted in a very respectable top five finish. The much-anticipated Ford GT’s finished seventh and ninth, hampered by repeated gearbox issues.

GTD had another close battle for the class win. As Rene Rast kept the #44 Audi R8 firmly in front, a trip off-track near the end of the race would sadly put Richie Stanaway’s #98 Aston out of contention, dropping the Team Redline driver down from second to fourth by the race’s end. The Konrad Motorsport Huracan would take the Aston’s place, then the class lead as Rast, running on fumes, was told to let the Lambo past. With both cars running lightly, Nicky Catsburg (another TRL driver) charged through the field, overtaking the Huracan (which would pit, dropping down to a fifth place finish), but missing out on the win by 3.048 seconds. Wrapping up the podium in class was the “Don’t Mess With Texas” Viper GT3-R of Riley Motorsports, the same car that won GTD in 2015.

Team Redline drivers weren’t the only names gamers might’ve recognized from the virtual world, either. Sean Johnston, a GT Academy finalist that faced off against Bryan Heitkotter in the first US competition, started sixth-in-class in the Prototype Challenge class (hat tip to @GTPorsche). Unfortunately, his Oreca would be retired around the seventh hour. The class saw a much bigger gap on than the others, with the #85 FLM09 clinching the victory with Kenton Koch behind the wheel, four laps ahead of the #52 car. Five laps back, the #20 Oreca wrapped up the podium for the class.

The next race in the series will be at Sebring, for a once-around-the-clock event, March 16-19.

DaytonaMotorsports
The original comments for this post are no longer available.
Test Your Badge Knowledge With Our Car Logo Quiz