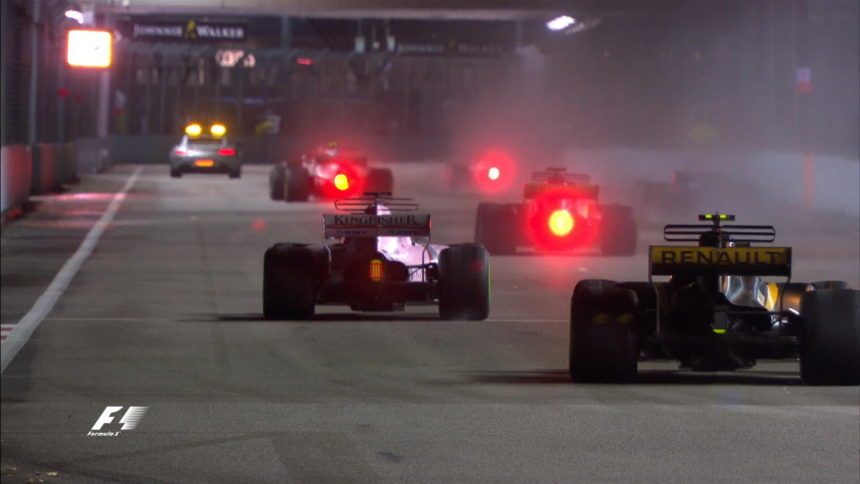 The excitement began before the lights even went out. The heavens opened and the rain came down right before the race began. We’ve been wondering about it for 10 years and it finally happened — the first ever wet Singapore Grand Prix.

The drivers and teams were racing into the unknown — they’ve never raced in the rain under the lights at night. Visibility, spray, the shine from the lights. What tires do you start the race on? Where do you brake? How much throttle do you apply? After all the preparation the teams and drivers go through, they were somewhat in the dark.

The action at the start was some of the best we’ve seen all season. Kimi Raikkonen got a dream start from fourth — pulling right up alongside Max Verstappen in second. The slow starting leading Sebastian Vettel came across to cover off Verstappen, who’d also got away well. Vettel had no idea that Kimi got such an incredible getaway and Max found himself pinched by the two Ferraris.

With no room in a Ferrari sandwich, Verstappen clipped Raikkonen causing Raikkonen to launch into the side of Vettel. Vettel was to blame, but he would never have known that Raikkonen was there – the mirrors on a Formula One car are about as useful as a chocolate fire guard.

Raikkonen then came back onto the track into turn one, slamming into the side of Verstappen’s Red Bull and taking both drivers firmly out of the race. Fernando Alonso’s McLaren was also caught up in the melee in turn one, his car flying into the air, side pod torn open. Miraculously he rejoined the race, but only for a further eight laps.

Vettel had managed to make it further up the road but spun out on the coolant that was spilling out the back of his car, hitting the wall head on. His front wing and nose cone were completely ripped off, his radiator ripped open. With Vettel’s race in tatters, his title rival Lewis Hamilton had escaped the carnage and found himself in the lead. The remaining Red Bull of Daniel Ricciardo in second, Nico Hulkenberg’s Renault in third. It was time for Safety Car number one.

There was no further action on track until lap 11 when the second Safety Car period began after Daniil Kvyat stuffed his Toro Rosso into the wall. Hulkenburg strangely waited two laps to pit under the SC. He dropped down to fifth.

What everyone learnt today was that this Marina Bay Circuit takes an age to dry out after it’s rained. It was 25 laps before drivers started to gamble for slicks; Kevin Magnussen and Felipe Massa were the first to roll the dice. By lap 30, the entire field had switched to slicks.

The race became quiet again until lap 38 when Marcus Ericsson crashed his Sauber on the tight Anderson Bridge, thus bringing out the third Safety Car of the evening. Hamilton sounded fed up over the radio as his lead dissipated for the third time.

The race endured so many stoppages that time decided the length, rather than number of laps. A Formula One Grand Prix can only last a maximum of two hours. We managed to get in 58 laps of the original 61.

Hamilton’s performance to win the race was a champion’s drive. The fans agreed as he took home his second Driver of the Day award. Everyone expected the Red Bulls to charge to the front of the grid but when it came down to it, Daniel Ricciardo couldn’t stay with Lewis out front. Throughout both Practice sessions on Friday, the race pace of the Red Bulls was consistently faster than what Mercedes could muster. But in the actual race, this pace was missing.

This was the one race when Ferrari knew it had an advantage over Ferrari. Its cars ended up parked in the garage while the Mercedes cars were sitting on the podium.

Nico Hulkenberg unfortunately managed to achieve the record for most race entries without a podium. The German ended up retiring from the race with suspected hydraulic issues. New Gran Turismo series ambassador Carlos Sainz took home a spectacular fourth place for Toro Rosso — the best finish of his car.

We said this Championship could come down to a retirement or bad luck — could this be the key race in the 2017 title race? Hamilton was three points ahead of Vettel before this race began. Due to a lack of overall pace around this circuit, Lewis had resigned himself to, at best, a fourth place finish. He now holds a 28-point advantage in the Championship.

If you want to experience a wet night race, F1 2017 is out now on all major platforms. Don’t fancy a wet Singapore? You can also try out a wet Monaco at night! We thought it was Codemasters’ best F1 game to date. 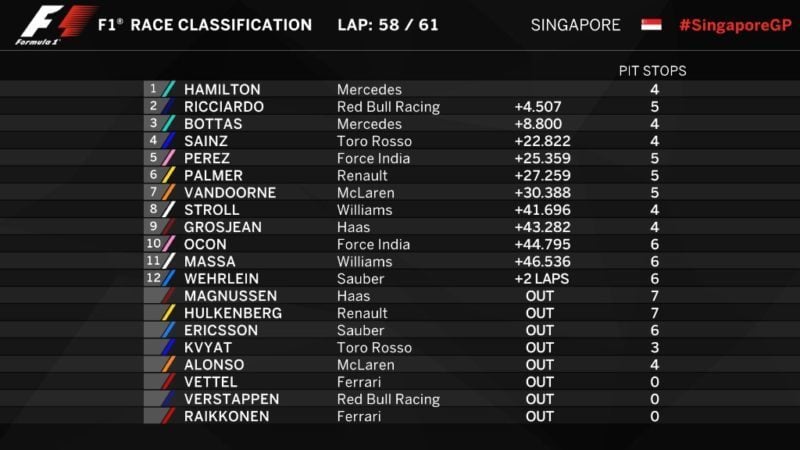 F1 2017 Season
423 Comments Discuss this post in our forums...
Test Your Badge Knowledge With Our Car Logo Quiz