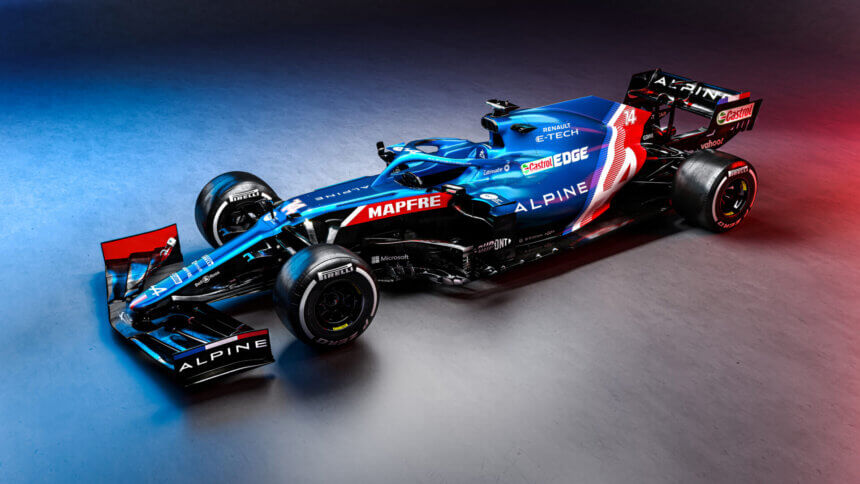 In the second of today’s two F1 car launches, the technically new Alpine outfit has revealed its A521 contender for 2021. It’s the first ever F1 car to wear the brand’s name, marking Alpine’s debut in the sport this season.

While Alpine, well known for its exploits in Le Mans in recent years, will be making its first appearance in F1, the car itself and the team behind it are no novices. The new team is in fact the Renault Sport team that competed last year and has, off and on, been part of the sport since 1977, and operates out of Enstone (UK) and Viry-Chatillon (France).

Renault’s internal reorganization has led to the new branding as it seeks to promote the Alpine sports car brand through its motorsports exploits. The result is one of two cars that will look totally different from its 2020 entry.

Under the skin then, the A521 is broadly the same car as the RS20, which last season captured three podium finishes for Daniel Ricciardo and Esteban Ocon, on the way to fifth in the constructor standings. However Alpine states it has “developed and improved every part that has not been homologated”.

That includes some forced changes under the new regulations. The technical specifications for 2021 are aimed at reducing some of the downforce available to the cars, with smaller diffuser strakes and a particular focus on the cars’ floors. Here again we can see the new tapering on the floor, and Alpine also seems to have adopted the winglet solution on the rearward outer edge.

It’s less clear where Alpine has spent its development tokens over the winter. Comparing the car with the RS20 reveals only very subtle changes, and new team boss Laurent Rossi made some interesting comments during the launch about having to soon focus on the new regulations for 2022-2025.

Of course one major change at the team is the departure of Daniel Ricciardo to McLaren. The team has picked a pretty impressive replacement though in world champion Fernando Alonso, who picked up two titles for the team in its Renault era in 2005 and 2006 — during which the team also collected two constructor titles. He’ll drive alongside Esteban Ocon who remains with the team for a second season.

There’s now only four cars left to break cover for the 2021 season, with the scheduled reveals as follows:

2021 Formula One World ChampionshipAlpine
373 Comments Discuss this post in our forums...
Test Your Badge Knowledge With Our Car Logo Quiz

Formula One 142 Mar 18 by Andrew Evans
The newest addition to the F1 calendar, Saudi Arabia, has revealed the track which will host its grand prix later this year. It’s called the Jeddah Street Circuit and, as…