According to a report from Digital Bros, the parent company of 505 Games and Kunos Simulazioni, a true sequel to Assetto Corsa is coming in 2024.

The information is contained within the company’s 2021 corporate report, published on Friday. While these generally make for quite dry reading, this report contains information on the various products under the Digital Bros umbrella — Assetto Corsa, Control, Death Stranding — including highlights, sales and revenue, and future plans.

Assetto Corsa’s slide contains much that we already know. The series recently passed €100m in sales between AC and its “new episode” Assetto Corsa Competizione — and the slide reveals that this is split 66:34 in the original’s favor. 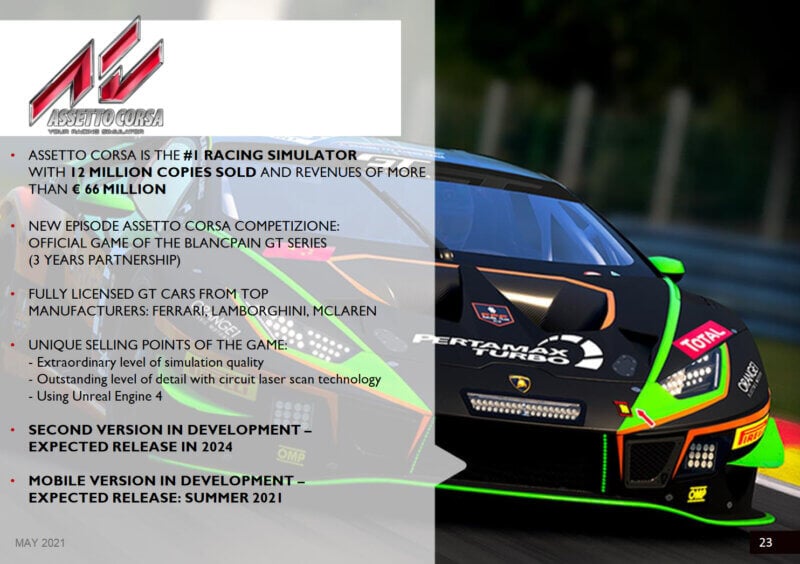 However the slide also spills the fact that a full sequel to Assetto Corsa is currently in development, and is set to arrive in 2024. It’s actually the second time this year a Digital Bros financial report has made reference to such a title, although previously it was a mere acknowledgement that it was something at least planned.

While the new information is a little more detailed, we don’t know anything beyond the intended launch year and the fact it’s in development now. In fact we don’t even know the title for sure; although it seems sensible for now to call it Assetto Corsa 2, game titles — and especially racing game titles — don’t necessarily follow the ordinal number tradition any more.

It seems likely that the 2024 date applies only to the PC version, with a console version to follow on in 2025. Either date though would suggest that any console version of the title will only appear on the current new-generation machines: PlayStation 5 and Xbox Series.

Another probable detail is the engine underpinning the title. The original Assetto Corsa used an in-house engine, having started development before Unreal Engine 4 became available, with Assetto Corsa Competizione then developed using UE4. Given that Unreal Engine 5 has just entered early access, we’d imagine AC2 will be a UE5-based title — though we will have to wait and see.

With a reported 12 million copies of Assetto Corsa sold, placing it second behind only Gran Turismo 3 in terms of sim-oriented racing games, AC2 is sure to be a hit — so long as modders can continue to do their thing!