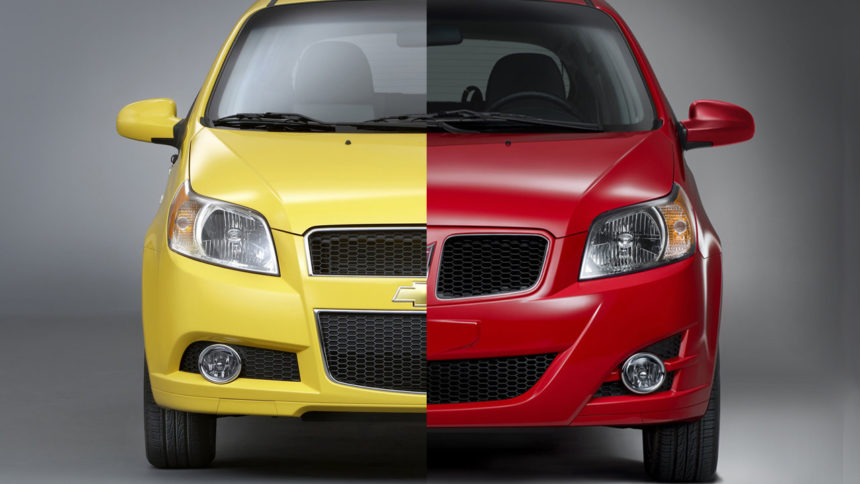 Badge Engineering: The Good, the Bad, and the Downright Weird

Badge engineering, for better or worse, is commonplace in the automotive world.

Commonly seen when two otherwise unrelated manufacturers hook up, badge engineered cars come in all shapes and sizes. It’s usually because one manufacturer works in a niche the other doesn’t, so it takes that car, sticks its own badge on it and off it goes. When you think about the cost to develop a vehicle, it almost makes sense.

Rebadging is a separate thing from platform sharing or even co-development. VW’s MQB platform, for example, underpins a good 25 different models, but an Audi TT is not exactly a rebadged VW Atlas.

On the flip side, the Toyota/Subaru co-developed GT86 and BRZ (and Scion FR-S) sure look like the same car, but the brands worked on the cars together.

However, not all badge jobs are equal. Most go unnoticed to all but us car nerds, but others hit both high and low notes. We’re looking at some of those bizarre outliers. 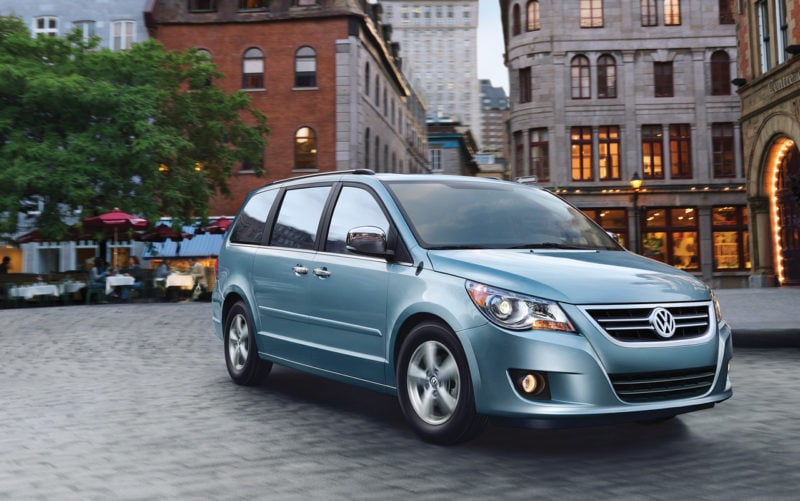 Chrysler is no stranger to internally rebadging stuff, and perhaps the vehicle at the forefront of this is its minivan.

Now don’t get us wrong, the Dodge Caravan and crew made for some great people carriers. It also essentially put the minivan front and center on American roads starting in 1984.

Over the years though, the Caravan and crew sort of lost its way. Between the financial crisis and Chrysler’s less than stellar engineering quality, sales fell off after 2008. The minivan lingered on all the way through 2017, making it a staple in the market for 15 years.

During that time Chrysler seemingly gave anyone who wanted the vehicle a shot at a badge job. Among these is probably the worst offender of them all, the Volkswagen Routan.

Similar to the Caravan in every way save for the front fascia and rear tail lights, sales were abysmal. It also made absolutely zero sense considering it cost nearly $8,000 more than the Caravan.

It also lacked some key features of its American cousin too. One of the major selling points of the Caravan was the Stow-and-Go seats that folded into the floor. The Routan didn’t have this feature, which diminished its capabilities.

The real kicker though is when the Routan launched, September 2008. You know what else happened in September 2008? The global financial crisis.

So here we had a rebadged vehicle, on an aging platform, that was more expensive than its counterpart. It also had fewer features and a launch date that coincides with one of the worst financial disasters in history. And, weirdly, VW already had two perfectly good MPVs that would do the job

It’s little wonder it only sold around 60,000 units over seven years. 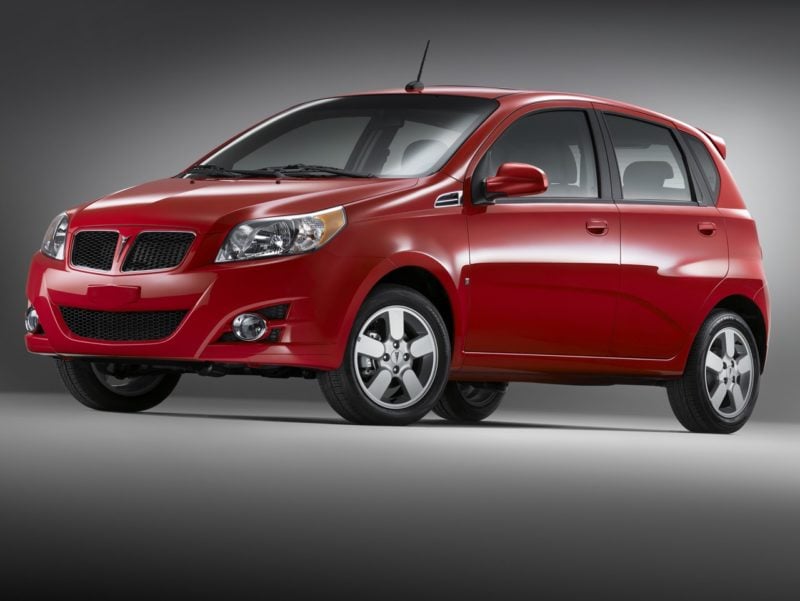 Like Chrysler, GM absolutely loves slapping extended family badges on its cars. Since the cleanup of some of its brands about ten years ago, it’s less common, but for a time the company thrived on simply swapping the grills to bolster its model ranges. The Pontiac G3 was the nadir.

Starting life as a Daewoo Kalos in 2002, it was about as uninspiring as cars get. It’s slow, with minimal space, not very fun to drive, and hideous. Its Chevy cousin, the Aveo, came to America in 2004.

For some strange reason in 2009, GM thought Pontiac needed its own Aveo variant. This was to add to the already packed line up from Chevy, Holden, Suzuki, Ravon, Daewoo, and ZAZ.

To accomplish this, GM did perhaps one of the laziest pieces of car design ever. It simply slapped a pig nose on the front of the car and pushed it onto the public.

Now what makes the G3 so sad is what Pontiac stood for. With the tagline “Driving Excitement” it was meant to be the fun side of GM. It did a pretty good job at this too. With the Firebird, Trans-Am, GTO, G8, Grand Prix GTP, and Solstice all on its resume, it met the fun category nicely.

Thankfully, the USA only had a few months to live with the G3 before Pontiac went belly up. Although this really shows just how sad the ending of the company was. GM tried to save Pontiac by throwing whatever it could at it, but it just didn’t work. In Pontiac’s death throes, it only sold 6,200 examples of the G3.

To make this even worse, in 2012 GM actually made an Aveo worth having too. As a sporty little hatchback, it would’ve fit right in as a budget car for an exciting brand. 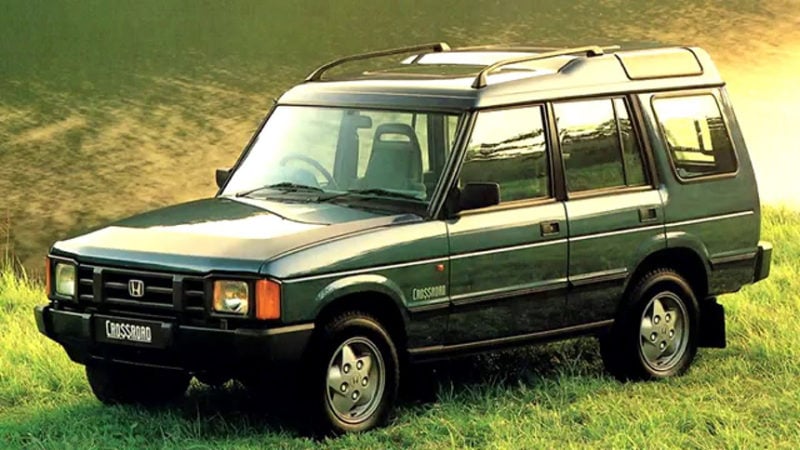 Back in the 1970s, Honda struck an agreement with British Leyland. The UK’s nationalized car manufacturer — yes, this was a thing — built some Honda models under license for its various brands.

It was a useful stopgap during a pretty weird time for British Leyland, replacing some of the very, very old models with some slightly less old cars.

The Honda Ballade became the Triumph Acclaim and Rover 200. Honda’s Civic morphed into the Rover 400, and the Concerto became even later Rover 200/400 models. Rover’s 600 and 800 used the Accord and Legend as a basis. Some models used Honda engines, some used Rover engines.

Slightly less known is that the flow of technology went the other way. Honda was  badly in need of SUVs to jump on the growing trend. It bought up the Isuzu Rodeo (Vauxhall/Opel Frontera) to fill one part of the brief, but for its full-size model it looked to its British partners.

If you think the image above looks like Honda just grabbed a load of Land Rover Discovery models and slapped a Honda badge on them, you’d be right. The Honda Crossroad is pure Discovery for better and, given the car’s less-than-Honda reliability, worse.

It did give Honda an epic offroader and the only V8 car it has ever produced. But the collapse of Rover and its sale to BMW put an end to the partnership, and killed the Crossroad – although Honda’s own CR-V had already replaced it by then. 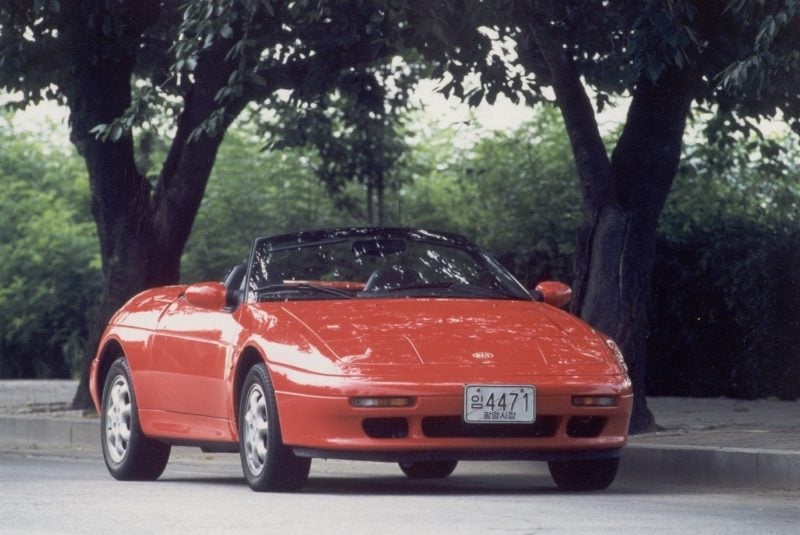 Our next entry is the Kia Elan. No that’s not a typo, it really is a Lotus Elan with a Kia badge on it.

Back in the mid-1980s General Motors bought Lotus. This gave the company a nice injection of money with which it could develop new vehicles. Lotus went back to its roots and came up with a new small convertible, called “Elan”.

Unlike its predecessors, this M100 Elan was a bit different: it was front-wheel drive. Still, it was a FWD Lotus, and it stuck to the Colin Chapman philosophy of simplify and add lightness. Reviews of the car were very favorable, and it’s the perpetual answer to the internet argument that FWD cars can’t be sports cars.

By Lotus terms it did quite well, shifting 20 cars for every Esprit the company sold. However, it couldn’t recoup the initial investment – each car ended up costing GM around $100,000. Blame for that one sits firmly in Mazda’s court; the MX-5 arrived the same year and was much closer in spirit to the original Elan. And half the price.

Production of the Elan ended in 1995. It was then that Kia swooped in to scoop up the license for the car.

Unlike other badge engineered vehicles, the Kia Elan is actually a little bit different to its host product. The main change is the engine. Instead of using the 1.6-liter Isuzu unit — most often turbocharged in the Lotus — Kia instead opted for a 1.8-liter engine making 149hp.

The tail lights are also of Kia’s own design, rather than the originals from Renault, as well as bits from the interior. However, the overall shape though is still very much a Lotus. The Kia Elan also found its way outside of Korea too. For a brief time, it was sold in Japan as the Kia Vigato.

Sales of the Kia Elan were pretty grim though. From 1995 through 1999 it only sold about 1,000 roadsters. Still, it remains the only convertible Kia made to date. 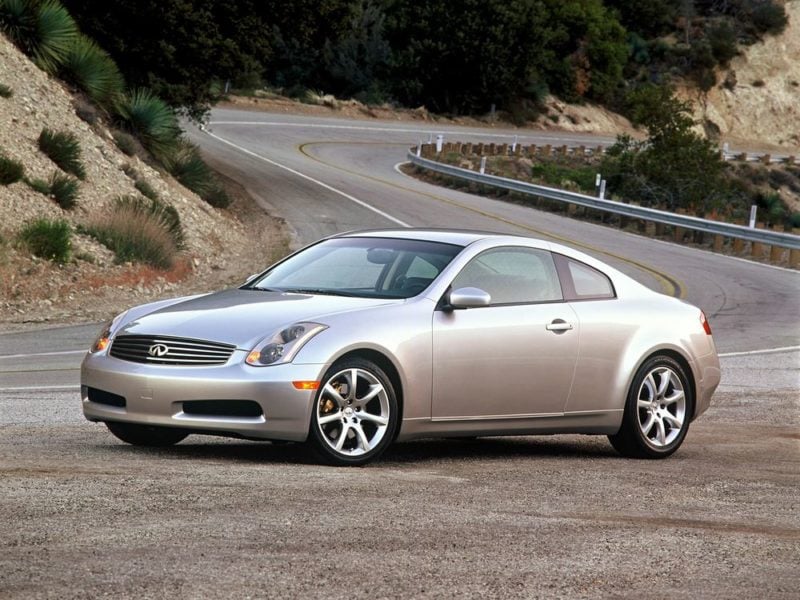 To cap the list off, we will look at badge engineering that actually works, the Infiniti G35 and G37.

Starting in 2002, Nissan replaced the Infiniti G20 with the G35. Unlike the G20, which used the Primera as a starting point, Nissan opted to rebadge a Skyline for the US market. This made it the first Skyline to arrive on our shores as a new car.

While not an official reason, we can’t help but think Gran Turismo played a roll in Nissan’s decision. Prior to the 1997 release of GT, the Skyline and GT-R were pretty much unknown in the US. Once gamers got their hands on the game though, the Skyline quickly grew in popularity in the states.

Since then, American car culture has embraced the Skyline. Movies like The Fast & The Furious only put the car further into the spotlight too. Once people knew about the car, it only made sense to start importing them to America.

On top of that, when the G35 made its debut, the press and drivers rather liked it. It was sporty, RWD, luxurious, and gave the Germans a run for their money.

So as you can see, sometimes badge engineering works pretty well. Without it, us Americans wouldn’t have the opportunity to own an actual Skyline without a bunch of import paperwork.