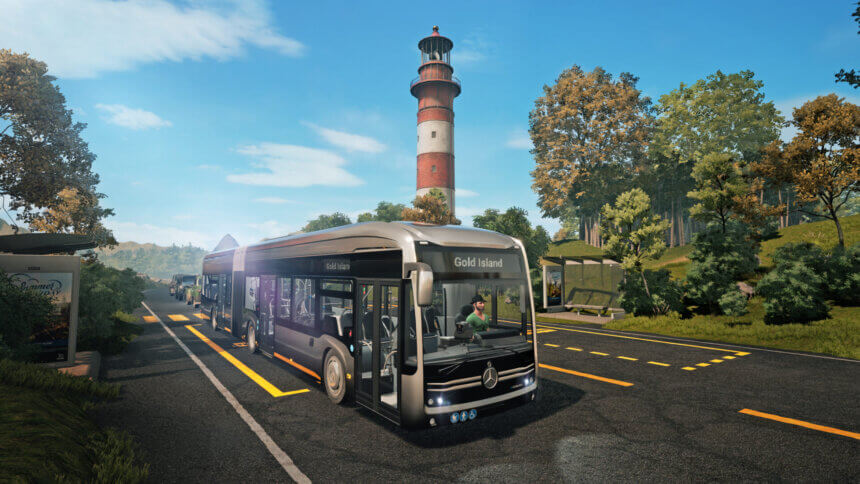 Following a grand reveal earlier in the month, astragon Entertainment and stillalive studios have provided more information on Bus Simulator 21.

At the core of BS21 is a career mode in which players can create their own mass transit company in one of two fictional cities. Of course you’ll get to drive your own bus around, but also manage a fleet driven by AI drivers.

While you could do this in single-player mode, it’s now also possible to do so in a multiplayer cooperative mode instead. You and up to three friends can manage the bus company, in the US-inspired Angel Shores or the European Seaside Valley locations, taking on responsibilities as you see fit.

This means that players can set up time tables, create bus routes, and buy new vehicles as a team. You could drive your own bus, ride on another, or even be a ticket inspector in your own company. Players can also participate in the multiplayer mode across console generations.

Bus Simulator 21 will feature more buses than before, with a selection of over 30 licensed vehicles — up from eight in its predecessor. The larger maps contain thousands of miles of roads to explore, and astragon notes improvements to the open-world design to give players more freedom.

In addition, the title will sport a new day and night cycle. Previously BS18 offered a user-selectable choice of day or night driving, with a mixture of day or night missions, so this looks to be a big step up for BS21. There’s no word yet on weather conditions, though this too was available in BS18 as a player choice.

“We’re extremely excited to present players with the next iteration of our Bus Simulator series. Our passionate community has made a number of suggestions on how to improve the game and we have integrated many of them into this title; especially around the cooperative
experience.

“This is just a taste of the changes we’ve made and we can’t wait to show you more in the coming months before launch!”

Bus Simulator 21 will launch on September 7 for PC, PlayStation 4, and Xbox One, and will be playable on PlayStation 5 and Xbox Series via backwards compatibility.

Bus Simulator 21
10 Comments Discuss this post in our forums...
Test Your Badge Knowledge With Our Car Logo Quiz

Gran Turismo 7 73 Jun 11 by Andrew Evans
It’s hard to believe, but it’s now a full calendar year since Sony opened up its Future of Gaming event with the full reveal of Gran Turismo 7. With 12…

Hardware 273 Jun 9 by Andrew Evans
After a couple of batches of closed pre-orders earlier in the month, Fanatec has now made the new direct-drive CSL DD, CSL Pedals, CSL DD table clamp, and Boost Kit…