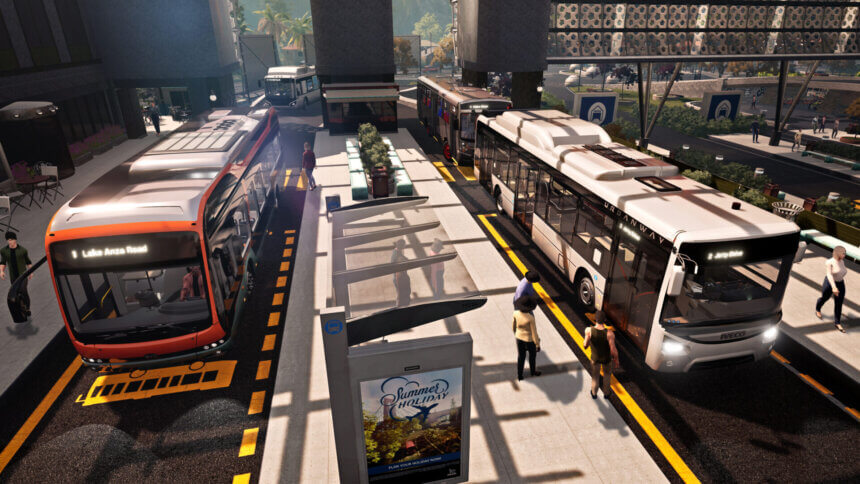 Those who like their driving games a little more sedate will have plenty to cheer with the latest news from astragon Entertainment. The latest entry in the Bus Simulator series, Bus Simulator 21, is only four months from release, and will arrive for PC, PlayStation 4 (and 5) and Xbox One (and Series) on September 7.

BS21 follows on from its 2018 predecessor, Bus Simulator 18, in providing a series of real-world commerical passenger vehicles for players to amble around a fictional city. However the title has grown to offer significantly more variety this time round, with 30 fully licensed buses — up from just eight in the previous game.

At present there isn’t a full vehicle list available, though BS18 packed in machines from Iveco, MAN, Mercedes-Benz, and Setra and BS21 should build on that. We know that’s certainly the case with Mercedes, as this year’s game packs in at least seven buses from the German brand. That includes, for the first time the electric eCitaro, in 12- and 18-meter versions, and the articulated — or “bendy bus” — Citaro L.

As we found with BS18 when we reviewed it in 2019, all of the vehicles should handle in an authentic manner, whether electric, bendy, or double-decker. Like its predecessor, BS21 uses the Unreal Engine 4 game engine to underpin its simulation.

There’s a career mode available in Bus Simulator 21, which will be familiar to fans of the series. You’ll be building up your own transport company to provide mass transit to a city, and you can do this both as a single player or a multiplayer co-op.

All the action takes place in one of two large open-world maps, with Angel Shores inspired by San Francisco’s Bay Area, and the more European Seaside Valley location.

Bus Simulator 21
10 Comments Discuss this post in our forums...
Test Your Badge Knowledge With Our Car Logo Quiz

Forza Series 16 Jun 13 by Andrew Evans
Microsoft has officially announced Forza Horizon 5, and at the same time confirmed both its setting and launch date. As expected, the Horizon Festival will move across the Atlantic to…