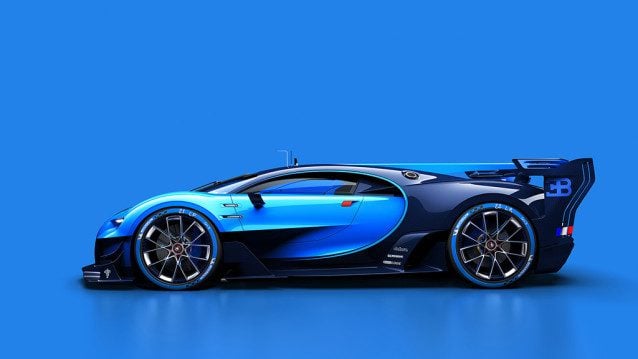 After a couple of weeks of extreme close-up teasing, the covers are finally off Bugatti’s Vision GT car due to head to GT6 in September. 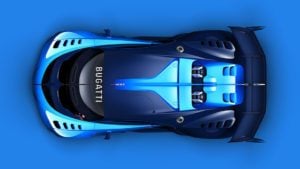 At first glance this VGT seems to be a steroidal Veyron, but this seems to be only superficial – the car is more like a silhouette racer that just happens to look a little like the Veyron.

Peering through that first-teased rear deck, the engine seems to be mounted far lower, but the exposed rocker covers still bear the EB and 16.4 branding. This hints that the extremely complex and thirsty W16 quad turbo engine from the Veyron be found powering this Vision GT car so you can expect north of the Supersport’s 1,200hp and appropriately dismal fuel economy even if there’s a hybrid system such as we’ve seen on most other Vision GT cars. It’s unlikely to be a car suited to endurance racing, despite the La Sarthe track map you see on the interior.

There’s myriad little details that mark this car out as merely being Veyron-inspired rather than Veyron-based. The body is narrower, along with a wider roof and higher shoulderlines, suggesting a completely different shell – hopefully one that is a little lighter than the 1,888kg Veyron.

We can see little nods to Bugatti’s past too. The colour scheme itself resembles the Type 57 Tank cars of the 1930s – a car that saw both highs and lows for Bugatti, winning Le Mans in 1937 and 1939 and the car Ettore’s son Jean Bugatti was killed while driving in 1939. Having the car’s racing number picked out in white on the arch grille is also a trait from Bugatti’s past.

Bugatti will take a full sized show car to the Frankfurt Motor Show, where it will be on display across the ten days of 17th-27th September 2015, at the Bugatti exhibit in hall 3.0. If you don’t happen to be in Germany to drop in and sample the ‘real’ thing, we’re not anticipating a huge wait for the Gran Turismo version to be unveiled.

Like what you see? Join in the discussion on our forums!

Jordan Greer · Sep 2, 2015· Comments
The Gran Turismo series has had a lot of milestones over its 25-year history, but the anticipation surrounding Gran Turismo 7’s free launch-day support for PSVR 2 is reaching hype levels not seen in quite some time, if ever. Kazunori Yamauchi feels it, too.

Andrew Evans · Sep 2, 2015· Comments
After a break in real-world racing following the controversial events at the end of the 2020 FIA Formula 3 championship, Igor Fraga will be returning to action this season in Japan’s major national racing series.

Andrew Evans · Sep 2, 2015· Comments
A new week means a new set of Gran Turismo 7 Daily Races, with three races running on their usual 20-30 minute schedules for the next seven days.

Jordan Greer · Sep 2, 2015· Comments
After I had the opportunity to be one of the first people to play Gran Turismo 7 with PSVR 2 last week, I also had the chance to speak with Gran Turismo creator Kazunori Yamauchi for a one-on-one interview to discuss the new hardware.

Jordan Greer · Sep 2, 2015· Comments
I just got back from a trip to PlayStation’s North American headquarters where I had the chance to be one of the first people to play Gran Turismo 7 on the PSVR2, and I’m here to tell you all about it.

Andrew Evans · Sep 2, 2015· Comments
The latest set of Gran Turismo 7 Daily Races is now available, running across the next seven days, and marking a return of tuning to the events.