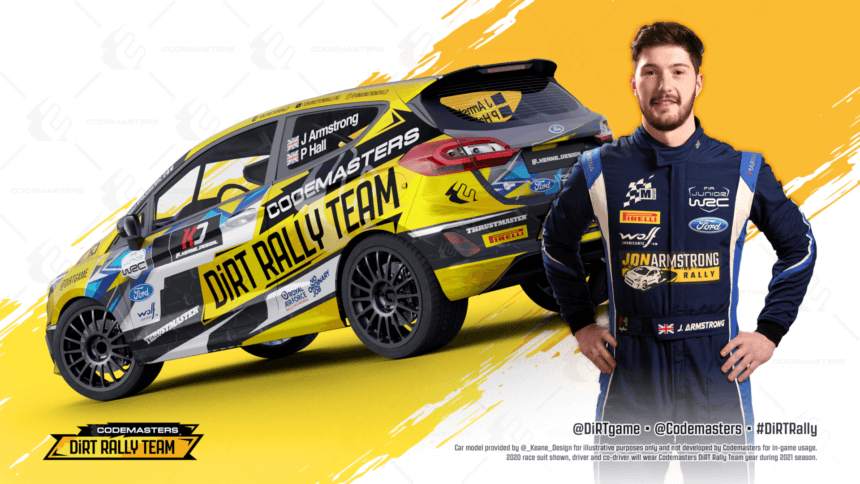 The line between real-world motorsports and its virtual equivalent continues to get blurrier by the day, as Dirt Rally and DIRT series developer Codemasters has now launched its own rally team.

Officially known as the Codemasters DiRT Rally Team, the outfit will be a single, full-season entry in the 2021 Junior World Rally Championship (JWRC). This series runs equal machinery, with all drivers competing in the front-wheel drive Ford Fiesta Rally4, as prepared and supplied by official Ford works team M-Sport Poland.

The 2021 JWRC season will run as a support series to the World Rally Championship itself, taking place at five of the WRC’s European rounds. That’ll start with Rally Croatia, the third round of WRC, at the end of April, and take in events in Portugal, Estonia, Belgium, and Spain, ending in October. Three rounds take place on asphalt, with two on gravel surfaces, ensuring the drivers face the same mix of challenges as their top-level counterparts.

Driving the CDRT Fiesta will be Jon Armstrong. As well as working for Codemasters, Armstrong is already a professional rally driver and has raced in JWRC and WRC2 — the step below WRC itself. His best finish was a ninth place in WRC2 in the 2017 Rally Catalunya, driving a Ford Fiesta R5, so he brings plenty of knowledge to the table. Experienced WRC driver and co-driver Phil Hall will take on co-driving duties.

“We’re excited to launch the Codemasters DiRT Rally Team, and we have high hopes for Jon and Phil in the upcoming Junior WRC season. Working alongside Jon, I know the skill, passion and dedication he brings. He’ll have the entire studio and DiRT Rally community behind him.”

Thrustmaster and the Royal Air Force will also provide support for CDRT car across the 2021 season.

CodemastersWorld Rally Championship
12 Comments Discuss this post in our forums...
Test Your Badge Knowledge With Our Car Logo Quiz

Automotive News 6 Mar 22 by Andrew Evans
If you were particularly taken by Aston Martin’s 2021 F1 Safety Car, as revealed earlier in the month, there’s some good news: you can now get your hands on one.…