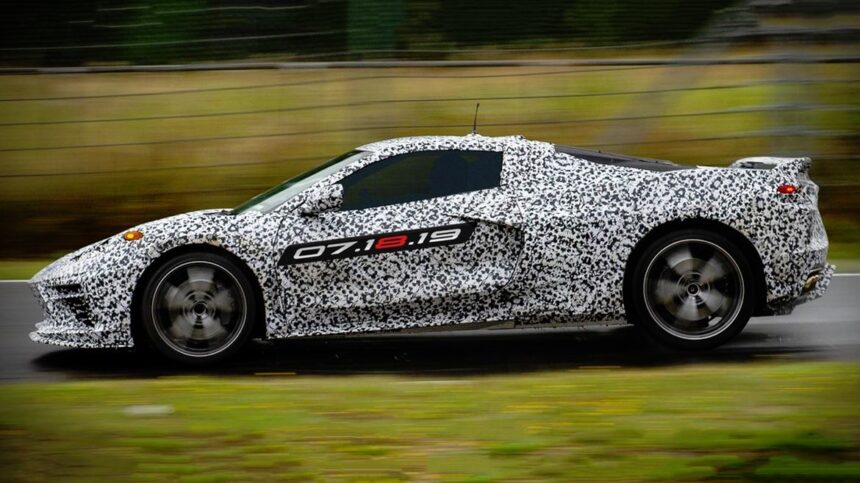 For years the worst kept secret in the automotive world was the Toyota Supra. Now that it’s finally here, there’s a new contender for the category: the next generation Corvette. However, in a few months, we will finally get a chance to see what all the fuss is about.

Presumably using the platform code C8, the new ‘Vette will get its debut on July 18 at a special event.

As for what to expect, the C8 should elevate the Corvette from sports car to supercar. Going by all the rumors and spy shots, the engine will find its way behind the driver making it the first rear mid-engine Corvette.

That engine is still a bit of a mystery though. One look around the internet and you’ll see speculation ranging from a twin-turbo V6 all the way to a V10. However, the most likely is a new variant of the 6.2-liter V8 found in the C7 good for around 500hp, at least in the base car.

The eventual ZR1 (or possibly the Zora) could see something a bit crazier. The current ZR1 is already pretty impressive with a whopping 755 ponies and 715lbft of torque. With the C8 ZR1, we could see that number climb well into the 900hp realm and potentially sport twin turbos.

There’s even a possibility of a hybrid system showing up in the Corvette as well. But not like the Toyota Prius. Instead, it could use something similar to the Acura NSX to provide even more of a boost while helping with fuel economy.

The C8 should use an eight-speed double clutch transmission. In addition, we imagine a seven-speed manual will find its way onto the option sheet as well. Power should also go to the rear wheels instead of all four like some of the ‘Vette’s Italian rivals.

As for the rest of the car, we expect something lightweight and more track focused than previous Corvette models.

So will this new direction work for the Corvette? It’s hard to say, but seeing GM taking a new approach is impressive. Unfortunately, it could alienate one of Corvette’s largest buying demographics: the Baby Boomers.

The current Corvette is an affordable sports car that’s obtainable for many retirees looking for some fun. If the C8 gets more extreme with a price tag to match, it could drive away those looking from something in the $55,000 range.

Thankfully, it looks like GM is setting the Camaro up to take over where the Corvette once stood.

It will be interesting to see what GM has in store. However, we’re sure the rumor mill will provide enough tantalizing details to keep our minds swirling until July.

ChevroletCorvette
1160 Comments Discuss this post in our forums...
Test Your Badge Knowledge With Our Car Logo Quiz