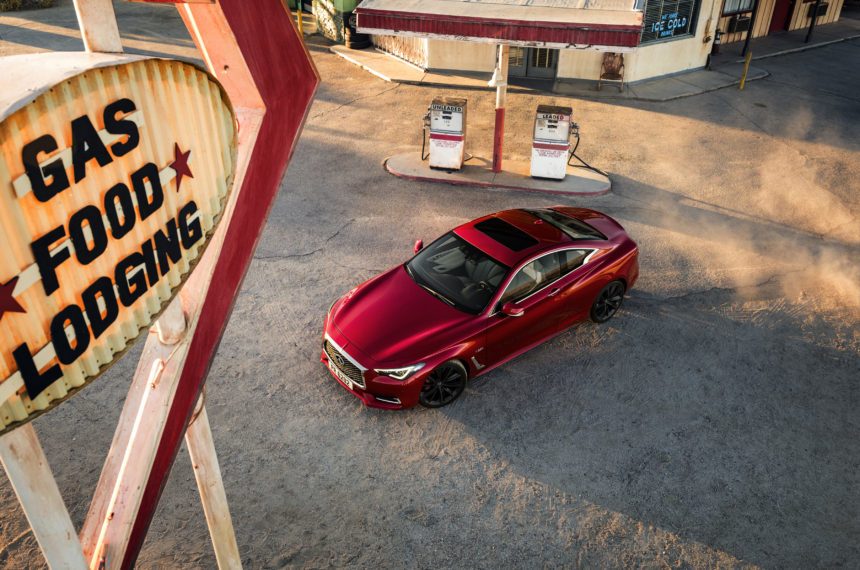 After a tricky start to life in Europe, Infiniti has been coming on leaps and bounds lately. The Q30 hatch and QX30 crossover have given it some mass market appeal, but we’ve been looking at the opposite end of its product range.

Well, that’s certainly a question you’re going to have to get used to if you own one in the UK.

This is Infiniti’s Q60, which we’ve tested in 3-liter, V6, twin-turbo, all-wheel drive flavor. In essence it’s the same as the Q50 saloon, but with a much sleeker body shape. Think of it as being like the BMW 4 Series is compared to the BMW 3 Series.

While it might be a popular brand over in North America, Infiniti’s market presence is on the small side in Europe. In fact in the UK in 2014 it sold 746 cars. That’s all models across the whole year. By comparison, Ford was selling that many Fiestas every two days.

For the uninitiated then, Infiniti is Nissan’s upmarket arm. It’s like Lexus is to Toyota, sharing platforms and technologies, but with nicer materials and a premium air. Generally Infiniti does a bang up job of it too, but the company launched in the UK in the same month as the global financial crisis. Talk about bad timing to market expensive Nissans…

The Q60 coupe shares a great deal with the Q50 saloon, and both use the same platform as the Nissan Skyline and 370Z. It’s a good place to start, and our test car packs in a new, 400 hp, twin-turbo V6 and all-wheel drive. 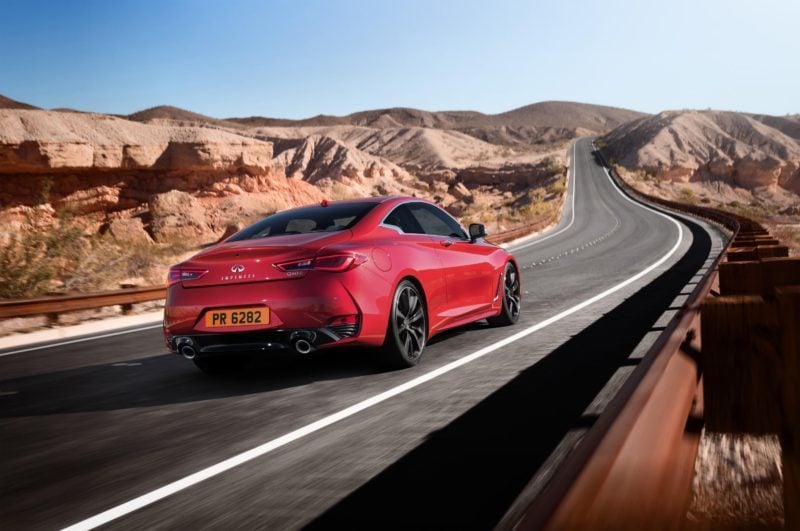 That should motor a bit then?

Kind of. You see, a good chunk of what Infiniti is about is the premium experience. That means you get thick, deep paint, leather everywhere, aluminum and wood trim finishers, speakers on every available bit of car, electronic gizmos, and so on. All of this adds weight. Loads of it.

If that weren’t enough, the Q60 also totes a seven-speed automatic gearbox, four-wheel drive and two steering racks. Why two? Well, Infiniti has a very clever steer-by-wire system it calls “DAS”, but it’s legally required to have a physical steering rack in case of failure of the electronic system (which Infiniti stresses to us has never, ever happened).

So this mid-sized coupe hits the scales at well over 4,000 lb. For a quick comparison, that’s 700 lb more than a BMW M4, and nearly 300 lb more than a Nissan GT-R. But for all the Q60 has been sneaking at the biscuit barrel, it really doesn’t feel that hefty off the line. It’ll hit 60 mph in under five seconds and overtaking pace is impressive.

We’re still not entirely convinced by the DAS system though. It gives the Infiniti a few really significant advantages, such as no kicks back through the steering when you clout a decent pothole, but this means it also lacks more subtle feedback. A lot of modern electromechanical systems are guilty of this too, but the Q60 is a little more numb than most.

That said, it’s easy to place on the road with not much effort, but the weight comes back to haunt it. To keep it from rolling onto the bump stops in every corner — and with one eye on sportiness, we suspect — the Q60 is well into the firm side of things. You won’t feel lumps and bumps through your fingers, but you certainly will feel them through your buttocks. Our Sport Tech’s dynamic suspension cleans things up a bit, but even Infiniti describes the ride as “secure”, which is rather telling. 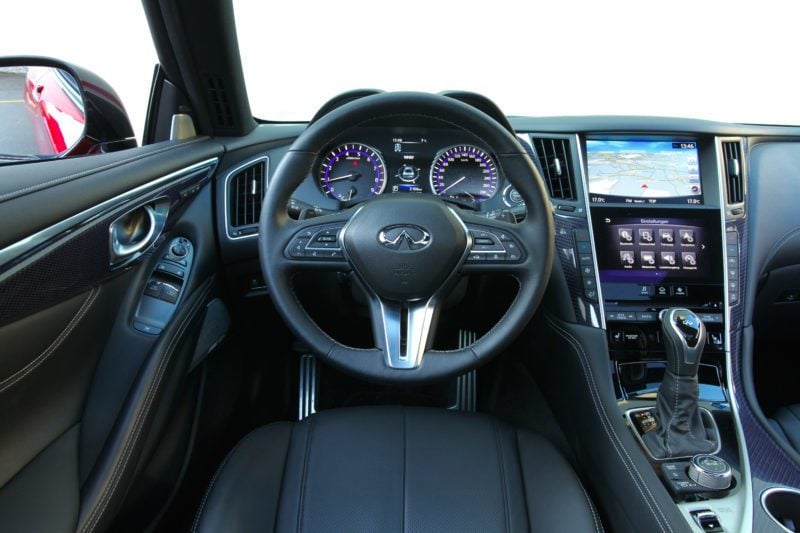 The Q60 retains one of the things we love about the Q50: the charmingly redundant dual screen set-up. It means you never have to look away from the navigation in order to muck about with your music — or the g-force meter — and reduces a lot of button clutter.

There’s a lot to control in those screens too. In this specification the Q60 includes dual-zone climate control, navigation, DAB digital radio, the around-view monitor parking camera system and a drive mode selector. By use of an intelligent key system, drivers can setup and store their personal preferences, which the car will recall and restore. This includes not only engine, suspension and steering setup, but radio stations, navigation and display, heating preferences and the seat and wheel position.

Infiniti also fits active noise cancellation tech, to help minimize the intrusion of external noise — including the engine and road noise — into the cabin. There’s a 13-speaker Bose audio system too.

The safety kit is impressive. Non-Tech cars get cruise control, brake assist, collision warning and forward emergency braking. Cars like our test vehicle upgrade to intelligent cruise control, lane departure prevention, blind spot intervention and reverse collision prevention. It’s not exactly an autonomous car, but we were able to drive it for some distance without any meaningful driver input.

In addition to all of that, adaptive, active LED headlights and heated front seats with eight-way adjustment are both also standard on this car. 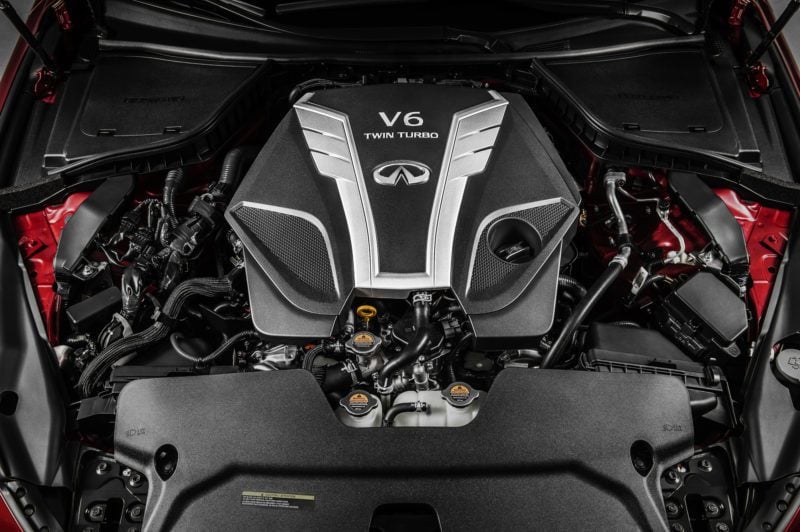 That’s a tricky old question. Infiniti doesn’t have that much market presence in the UK, so it’s hard to predict.

Mid-sized coupes can find good homes on fleet. The body shape makes the driver happy, the saloon underpinnings make the fleet manager happy. That’s not going to be the case with the Q60, as there’s no diesel option and the 3-liter V6 twin turbo hits 210g/km CO2. Your fleet manager will not be happy.

Where the Q60 is going to appeal is with Generation X; those in their late-30s to 40s with younger families and a desire to be a little different. We don’t want to mention the golf club car park, as that may be doing it a disservice, but there is some element of that culture to it.

What else will someone buying a mid-sized premium coupe buy? A BMW, an Audi or a Mercedes-Benz, naturally.

The Q60’s biggest rivals are unquestionably the BMW 4 Series, Audi A5 and Mercedes-Benz C-Class Coupe. However, to at least match the Q60 V6’s performance, you’ll need an M4, an S5 or an AMG C43, and you’re talking serious money there.

Perhaps the closest rival is the Q60s ideological twin, the Lexus RC. Again, you’re going to need to fork out some extra money to get the V8 RC F to match the Q60’s performance, but otherwise they’re peas in a pod. 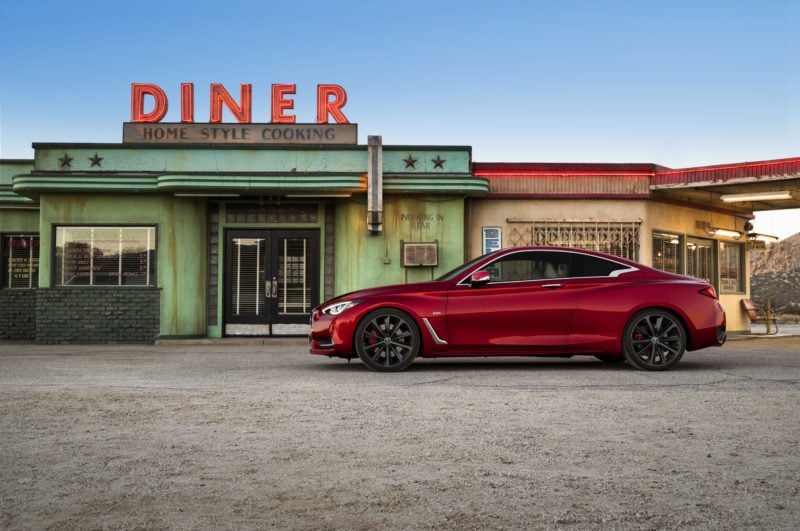 The Q60 is comfortably the best-looking car in the sector. Admittedly there’s only five cars in the sector, with two thoroughly bland cars and an Audi that now looks like it’s been beaten into submission by Paul Cezanne, but the Q60 is properly handsome.

It looks and feels relatively special on the inside too, and there’s a substantial amount of equipment. For a car that maxes out at £46,690 (bar a few options), at a price point where other brands don’t know whether to offer leather or not yet, it seems to be rather good value.

But how it drives and rides is the thumb in the soup. The Q60 is too heavy and what should be a relaxed ride tending to sportiness becomes a firm ride verging on uncomfortable. We appreciate the benefits of the drive-by-wire steering, but it’s not a very tactile system.

If you take that into consideration and avoid the really good fun roads, the Q60 is a fine cruiser — and will look great in the golf club car park. Damn.

The Q60 looks great, goes well and is a good deal more exclusive than the German coupes. Just don't expect much driving pleasure. 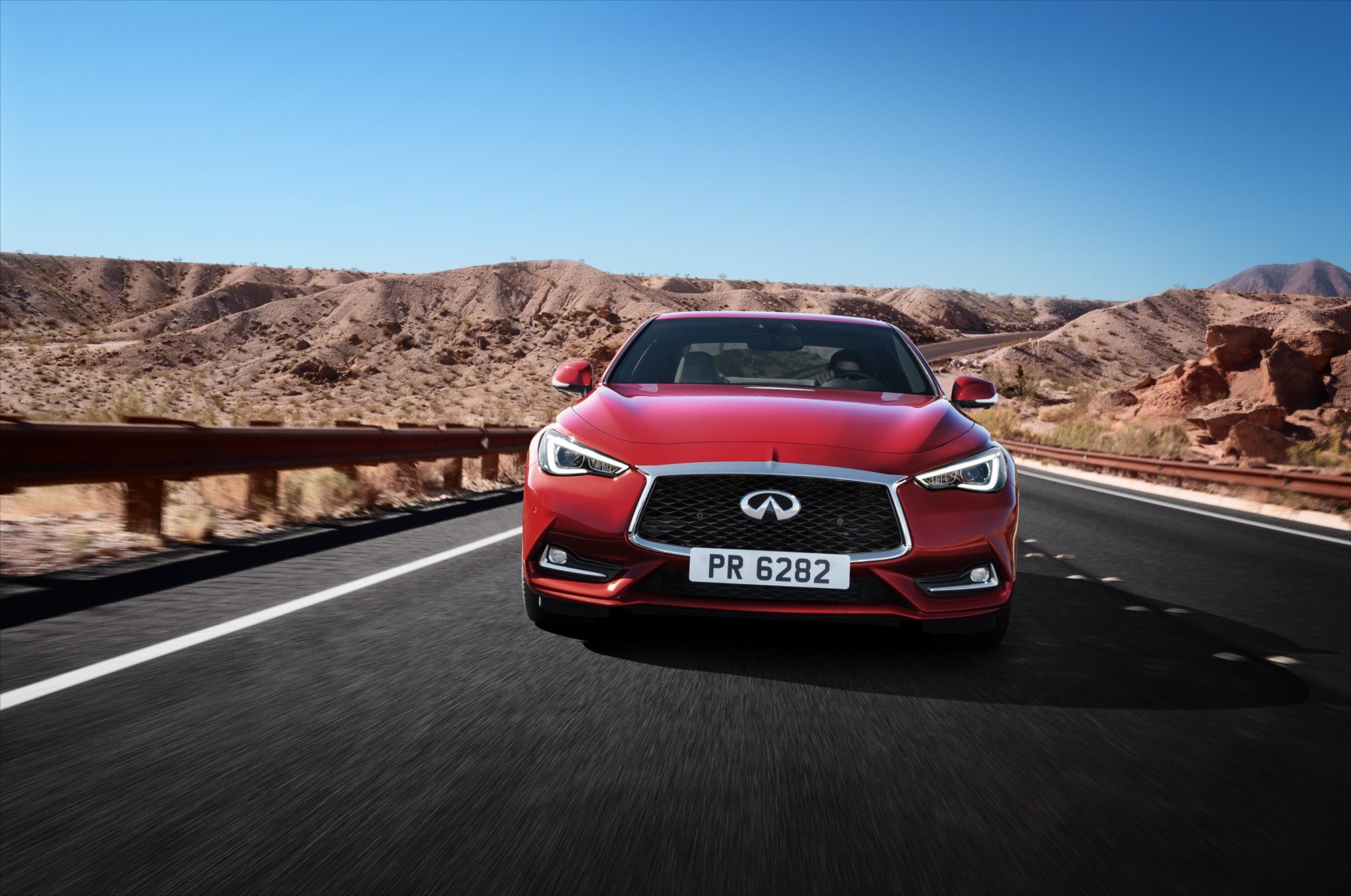 Performance
A bit too much weight takes the edge off, but it still has plenty of get up and go.
Ride & Handling
Drive-by-wire steering can lack fingertip feedback, and general ride quality is on the firm side even with dynamic suspension.
Space & Comfort
A decent boot and, other than headroom, good space in the back. Front seats are excellent.
Equipment
A high level of standard kit includes adaptive cruise, dual-zone climate control and a 13-speaker Bose audio system.
Value
It’s a lot of money for not a lot of badge, but undercuts its rivals for toys and performance. Depreciation and fuel economy are mediocre.

First Drives
6 Comments Discuss this post in our forums...
Can You Beat the Impossible Gran Turismo Quiz?