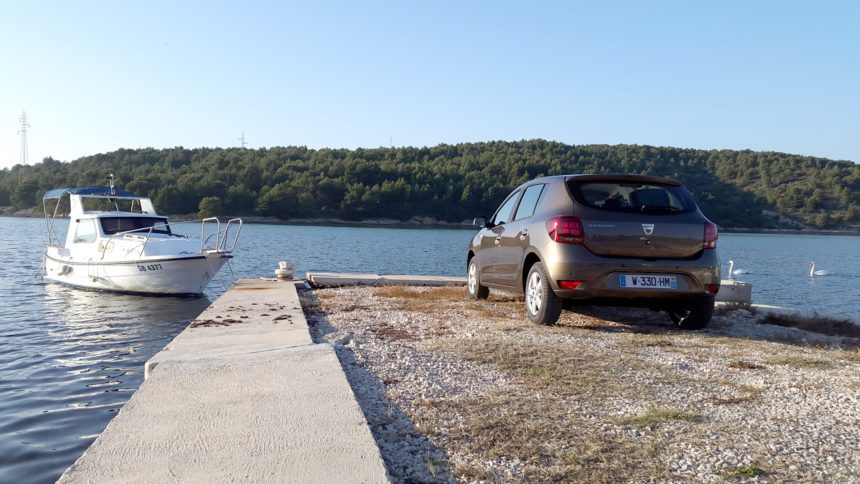 The global financial crisis in 2008 focused many people’s minds on value for money and no-frills products. But can no-frills motoring be a thing? We’ve been out and about in Europe’s cheapest new car to find out.

This is the Dacia Sandero, the cheapest car it’s possible to buy, brand new, in Europe.

Well, sort of. The basic Sandero, which is the Access trim with a naturally aspirated 1-liter engine, is Europe’s cheapest new car. At £5,995 it’s so cheap that it still good value compared to a three year old Ford Fiesta. What we’ve been driving is the turbocharged Ambiance model, which runs to £7,995. We’re so extravagant.

It’s an old Romanian marque that used to build Renaults under licence — including the R8 Gordini, before you ask — before Renault brought it in as a subsidiary in the 1990s. The company is still based in Romania and still makes its cars there, but they’re now a little more individual in style.

That said, the technology underneath a Dacia is still Renault. The Sandero you see in these images is based on a very similar platform to the second generation of Renault Clio. It’s very closely related to the current Clio and Renault Captur, along with the Nissan Juke.

In fact, the Dacia brand represents the opposite end of the scale to the Infiniti we featured last week — “affordable” Renaults, rather than expensive Nissans. 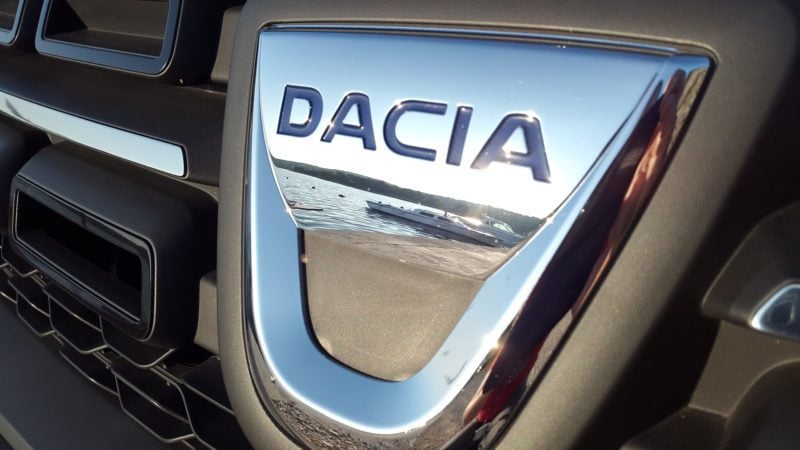 So it’s cheap to make and buy. Does it drive ‘cheaply’ too?

It’s a fair question. There’s lots of cheap cars that really do drive cheaply, with numb steering, a patchy ride and precious little attention to NVH standards. The Sandero isn’t one of them.

Getting up to speed is a fairly laid back affair, but the three-pot engine — the same one you’ll find in the back of a Twingo — is characterful, although if you stretch it out you might discover that the character is a chainsaw-powered sewing machine. At least it isn’t boring though. 60mph comes up in around 11 seconds, and that’s about fair enough for a small hatchback. The base Sandero requires the thick end of 15 seconds, so that extra £2,000 is already worth it.

Once at speed it’s surprisingly refined. It’s not quite up at Rolls-Royce levels of isolation, but it doesn’t let as much road noise or wind noise in as you might expect. While the interior doesn’t seem all that well made, there are no buzzes or rattles. The Sandero is comfortably better at cruise than some vehicles at this end of the market.

Ultimately, the Dacia is a Renault Clio at heart and that’s a pretty good base when it comes to ride quality and handling. It hangs on gamely through bends and you can even coax the occasional harumph of displeasure from the tires. If you’re just loping along, it deals with the majority of road surfaces without too much bother.

Where it lets itself down a bit is the steering, which is far, far too heavy. Placing the Sandero on the road isn’t a problem, but trying to coerce it through a three point turn is a bit of a trial. You can only imagine the time we had trying to get it back off the jetty in the images. It could stand having the power steering assistance turned up, but perhaps Dacia is reluctant in case it becomes as numb as some rivals as a result? 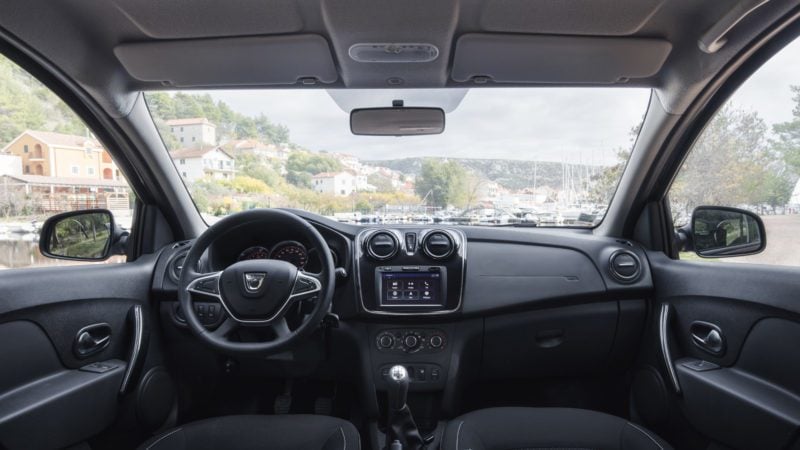 Does that mean it’s cheap because Dacia saved on equipment?

The base Sandero Access is a little basic, yes. There’s no radio, for instance, but you don’t get one in a £30k Ariel Atom either. In fact there’s really not a lot of kit, with about the only toys being a 60:40 split folding rear seat. Renault’s big on safety, so the Dacia gets stability and traction control, hill start assist and emergency brake assist, with ABS. Black bumpers, solid white paint and steel wheels complete the entry-level look — although all models get LED daytime running lights.

Even Dacia will concede that people don’t buy the Access model. It accounts for about 10% of sales. Most will go for the Ambiance trim, like our vehicle. Dacia adds goodies like DAB radio, USB and Aux inputs, and Bluetooth connectivity. You’ll also get electric front windows with a one-touch function (they’re still keep-fit winders in the back) and manual air conditioning.

It’s easy to be sniffy, but this is a brand new car with a warranty, with DAB radio, Bluetooth and air conditioning for a McDonald’s Happy Meal less than eight grand. That’s pretty difficult to argue with, especially when you consider that £600 of that extra cost over the base model is the engine upgrade. The 1-liter is okay, and again a Twingo engine, but the 0.9 turbo is not only quicker but more economical and includes stop/start tech.

However, there’s not much scope for optional extras. Dacia is very much a brand for loading the kit on as defined trim levels and you can take it or leave it. There’s a £50 height adjustment pack for the driver’s seat, steering wheel and seatbelt, and that’s pretty much it. That said, our fetching shade of brown is one of the options you get at Ambiance level, at £495. 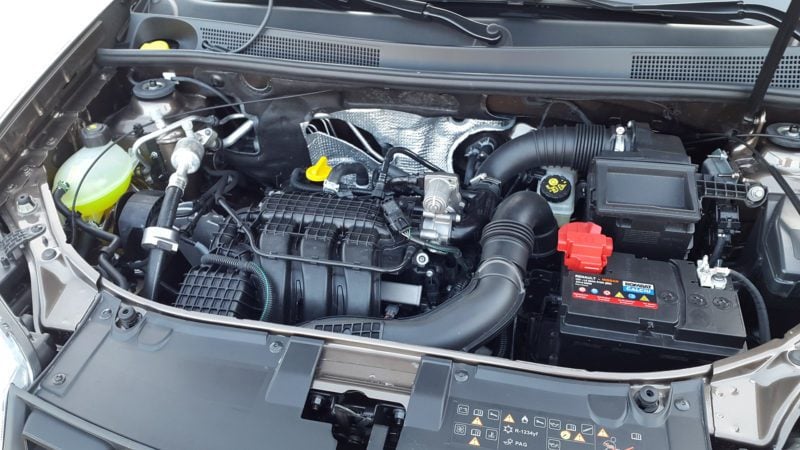 People tend to buy cheap cars either because they’re cheap or because they’re small and easy to park. The Sandero rules itself out of the second category because it’s the size of a supermini rather than a city car.

That narrows the field somewhat, but you’re still looking at the same kind of market. The Dacia’s going to find a home with those who have not much disposable income, or keenly value-oriented buyers. Anyone who’s after a first car, or just needs any car, prefers new to used, doesn’t spend much time driving and doesn’t mind what badge is on it.

For this money? There’s almost no other choice but a three-year old, used supermini with 20,000 miles on the clock. That’s how cheap the Dacia is.

Even if you’re throwing down the extra cash for our Ambiance model, you’ll struggle to buy anything else without a dealer discount. Cars like the Hyundai i10 and its twin the Kia Picanto start at around £8,500.

You might get into a SEAT Mii or Skoda Citigo too, although the Volkswagen up! is a few hundred pounds further away. The same sort of thing applies to the Franco-Japanese trio of Citroen C1, Peugeot 108 and Toyota Aygo. It’s also worth looking at the MG3 and Vauxhall Viva/Opel Karl.

The two closest cars we can think of are the Suzuki Celerio and the FIAT Panda. Both are a good deal smaller, but then nobody makes a B-segment Supermini for less than £11,000 any more. 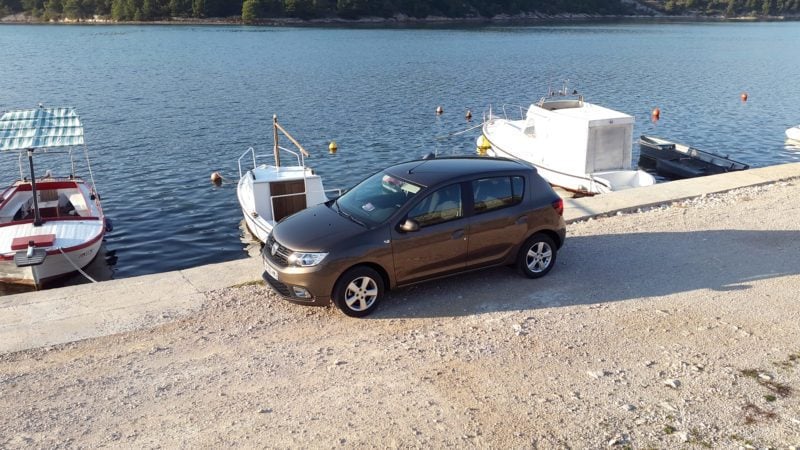 It’d be easy to think of the Sandero as a one-trick pony. It’s cheap, great, move on.

The fact is that it isn’t cheap. Sure, the sticker price is low, but you’re not getting a cheap car. You’re getting a brand new, modern car with modern amenities for used car prices. With a proper warranty.

Okay, so it’s basically a five-year old Clio under the skin, but then so is a brand new Clio. Go for a base-spec new Clio for the same price and you might wonder exactly what it is you’re paying for.

Certainly there’s other cars in its class that ride better, handle better, sound better and look better, but the gap isn’t exactly huge. When you’re talking about a car that is less expensive than even the cheapest of the class below it’s pretty impressive.

Stick with the Ambience specification and you’ll have just about all the car most people need.

The Dacia Sandero proves that bargain basement doesn't have to mean cheap and nasty, and it puts more expensive offerings to shame. 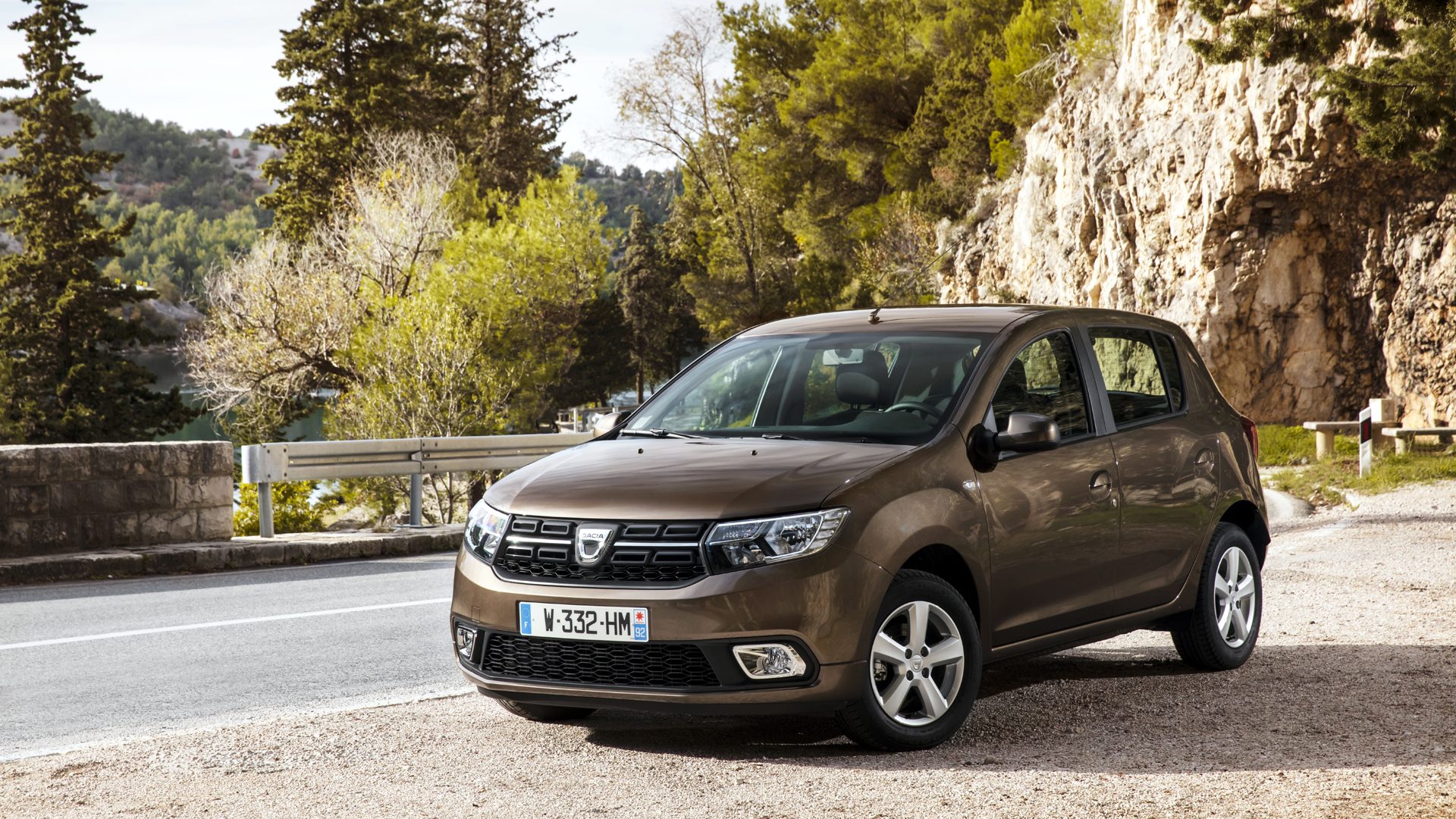 Performance
Avoid the entry engines and performance figures are acceptable. You’ll need to work the gearbox when it gets hilly though.
Ride & Handling
The Sandero rides competently for the most part and gets through a corner well enough, but don’t expect any fireworks.
Space & Comfort
As practical as any other supermini, with a good size boot and room for four. Five if they’re friendly.
Equipment
Dacia prioritizes “function over frivolity” and there isn’t an abundance of kit. Ambiance trim covers all the basics well, but they are just basics.
Value
Hard to argue with the amount of metal you get for the money you pay. This specification is the sweet spot for the range.

First Drives
23 Comments Discuss this post in our forums...
Can You Beat the Impossible Gran Turismo Quiz?

Automotive News 6 Feb 21 by Andrew Evans
If you’re feeling glum about motorsport right now, we’ll forgive you. Every other headline these days seems to be a big brand pulling out of some race series or other.…

Automotive News 4 Feb 21 by Andrew Evans
New US brand Czinger Vehicles will officially reveal its first car at the Geneva Motor Show next month, and it’s quite the debut. Known as the 21C — shorthand for…