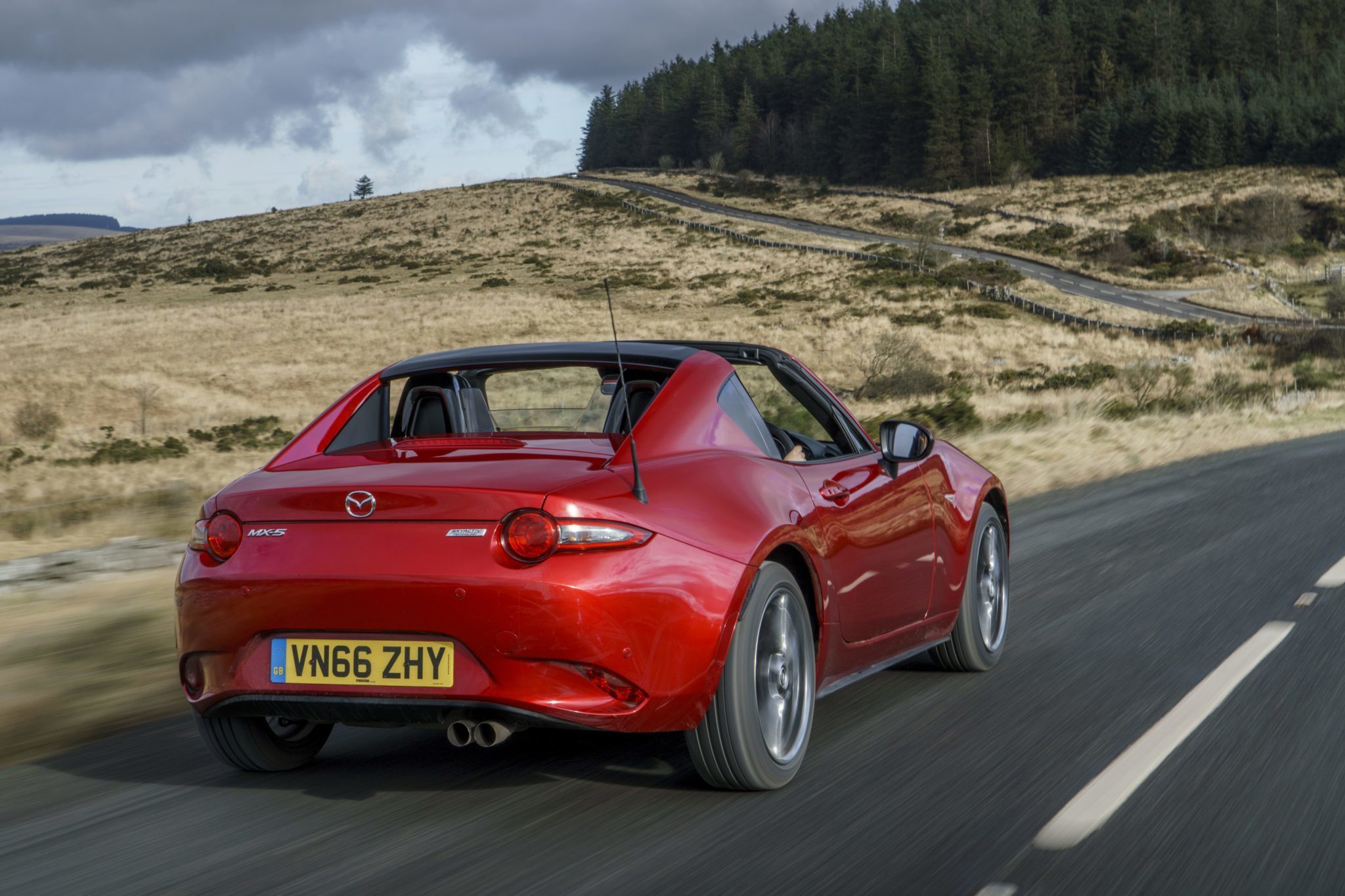 With a million sold, Mazda’s MX-5 is the world’s most popular two seat sports car. There’s a new version in the showrooms now though that aims to bring something a little bit different to the table. We’ve been to find out all about it.

This is the Mazda MX-5 RF, which we’ve driven in range-topping 2-litre Sport Nav specification.

It’s short for ‘Retractable Fastback’, which is a fancy way of saying it’s got a folding hardtop roof in the targa style. The center section of roof, along with the rear glass screen, folds away into a special cubby. The rear bodywork though stays exactly where it is, after moving out of the way during the folding process.

In effect, this is Mazda’s replacement for the third generation MX-5 roadster coupe, which made up nearly all of the MX-5’s sales before the car was replaced. 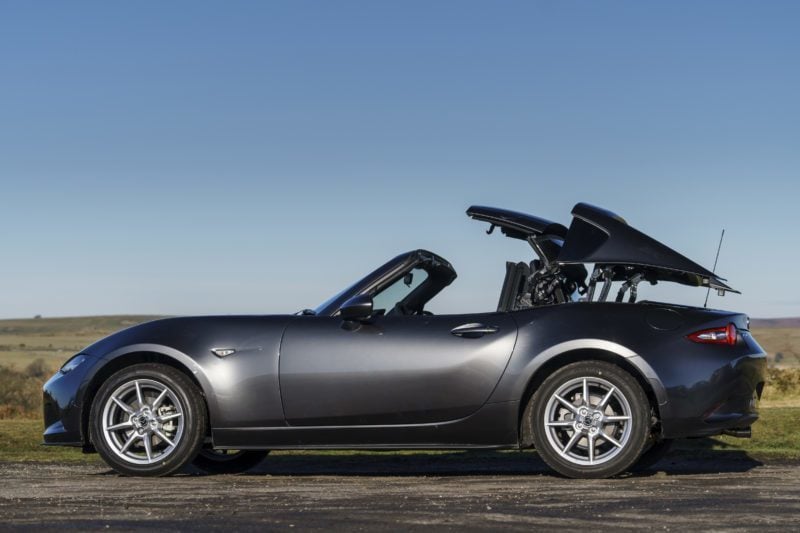 Despite the new roof, there’s not a lot of extra weight. Mazda reckons that there’s another 40kg, with the various pieces of roof made from glass-fiber and aluminum along with some regular steel. A lot of the weight is rather high up though, so Mazda has stiffened the rear suspension to counter any body roll.

Along with some power steering tweaks, the MX-5 RF is – dare we say it – an even better car to drive. It feels a little more planted on the road, but it’s incredibly agile. The turn-in is so precise and the rear of the car is still lively to respond if provoked (and the traction control is turned off). Up over deserted moorland roads, it’s possible to keep the RF running at really very high speeds indeed. As a point-to-point car there’s not much better, especially at this budget. There are very few companies that get the steering and gear shift action as consistently right as Mazda, and the MX-5 RF is a beacon for it.

It’s not at the expense of the ride quality either. Stiffened suspension is usually a euphemism for spinal crush injuries on anything but millpond-smooth asphalt, but the RF isn’t perceptibly worse than the standard ragtop. As Mazda’s pitch for this is a more refined driving experience, this shouldn’t be a surprise and the RF is certainly as calm around town as its fabric sibling, even with the roof off.

However it’s not all plain sailing. There is something about the rear of the roof structure that causes some noise at speed. It doesn’t matter whether the lid is in place or not, the RF generates a din that starts at around 40mph and increases proportionally with speed. At highway speeds, conversation is barely possible, other than arguments. It also hampers visibility, to the point where you cannot see anything over either shoulder. Make sure you specify parking sensors…

Although you may expect the more aerodynamic hard top to be better on fuel, Mazda’s official figures are identical. Despite the moorland roads, we were running at nearly 40mpg (33mpg US, 7km/l). 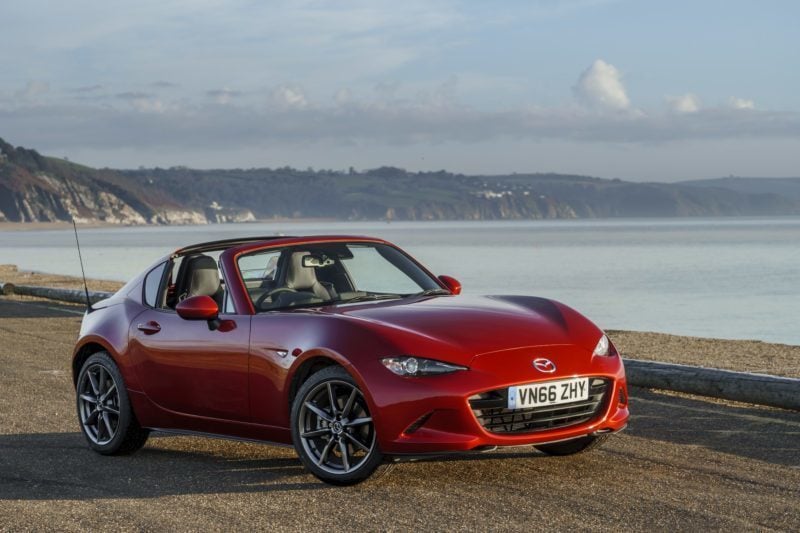 Traditionally, an MX-5 was a very spartan environment – toys are the enemy of weight and all. For the current car though the specification borders on impressive.

Standard kit includes climate control, adaptive LED headlights, DAB and internet radio and satellite navigation (the clue is in the name Sport Nav). There’s a 7-inch colour touchscreen for the infotainment, but also a remote dial arrangement between the seats, so you can pick whichever you prefer. On this grade you also get a premium Bose audio system, with headrest speakers for both occupants.

It’s a pretty nice interior too. It’s broadly the same layout as the Mazda 2 and Mazda CX-3, although the MX-5 does without the traditional glovebox for legroom purposes. Instead there’s a very small cubby between and behind the seats. You’ll also find a couple of removable cupholders there which look for all the world like Shrek’s ears and are absolutely useless for any cup greater than about four inches high.

Practicality isn’t a high point though. There aren’t many places you can store things in an MX-5, with precious little space in the doors, a tiny center space and the small cubby behind you. The boot is only 130 liters (4.6 cubic feet) too, though in this regard the RF is no different from the soft top. 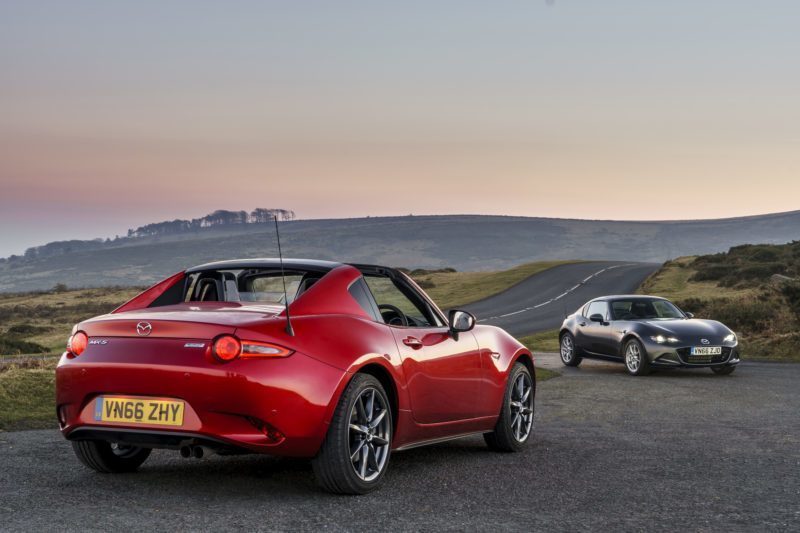 The third generation MX-5 was selling nearly four times as many hard top cars as soft top ones at the end of its life. That’s largely thanks to the fact it made the car a lot more comfortable in typical day-to-day use. Younger drivers bought the lighter, quicker car and made do with the lack of refinement, but older people wanted the more relaxing experience.

Similar things may apply to the RF. The regular MX-5 really isn’t that harsh but the perception of an easier life with a roof over your head will sway those of us with a few aches and creaks. However it’s a pretty enough car that the appeal should be wide-ranging.

Picking rivals for the RF is tricky, as there’s not really anything out there that’s quite the same. Quick coupes, like the GT86, don’t have the roofless vibe and quick convertibles, like the FIAT 124 Spider, don’t have the hard top. Other retractable hard top cars, Mercedes’ SLC for example, miss out on the targa layout. In fact the only other auto-folding targa on sale is a 911, and that costs three times as much money.

Nevertheless, the MX-5 RF is going to be a lifestyle sports car so it’ll face off against the Audi TT, in both coupe and roadster forms. The Audi has the more impressive interior and better on-paper performance, but has less appeal as a driver’s car. 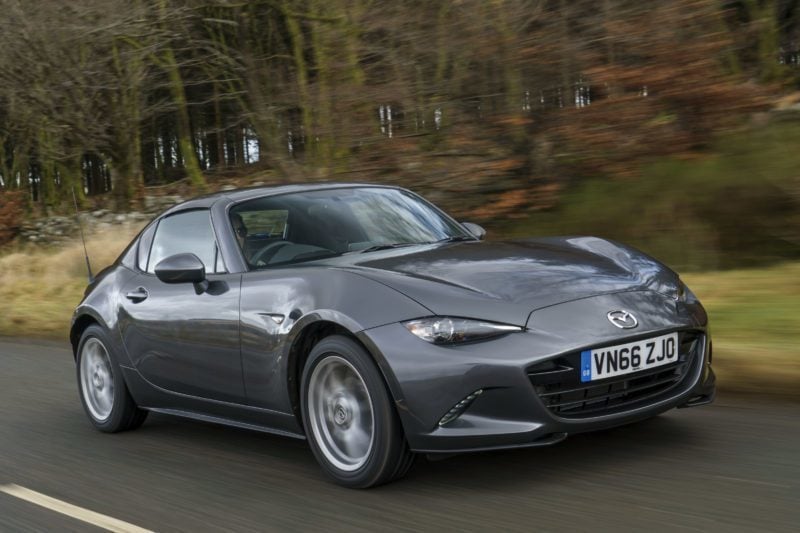 There’s absolutely no doubting the fact that the MX-5 RF is great to drive in this form. The extra weight means a tiny performance penalty, but it’s meaningless in the real world. We were less convinced by lower grade cars without the Bilstein setup and the 1.5-liter version, which seems more hamstrung by the weight. So long as you stick with the 2.0-liter car (which is also available with an automatic gearbox), you’ll have something truly special to drive.

It’s breathtakingly pretty too. The huge swept buttresses are spectacular in person and you’ll never get bored of opening and closing the roof, just to watch it in action.

Where the RF falls down is the wind noise which comes from the rear roof section. It’s audible at any moderate speed and becomes an absolute roar at highway speeds, whether the targa top is on or off. Ultimately it comes down to whether you can live with it or not and for us it’s something we can tolerate for all the other things that make the RF so good.

The RF is a prettier and better to drive version of the MX-5, but bring a set of earplugs.

The fixed roof takes some edge off the pace, but the RF is still fairly sprightly. The car’s ability in the bends makes up for the lack of go between them.
Ride & Handling

The ride is a little more cultured than the soft-top, notably so around town. As a point-to-point car on an open road there’s not much better.
Space & Comfort

It’s a relaxing and spacious interior, but only for two people. Overall practicality isn’t a high point, and wind noise can be a problem.
Equipment

It’s well-made, well-specified and a whole lot of fun for the money. There’s nothing else like it at this price point either.

A lot of ink, both traditional and digital, has been spilled on the Alfa Romeo Stelvio Quadrifoglio. This will not be one of those reviews... 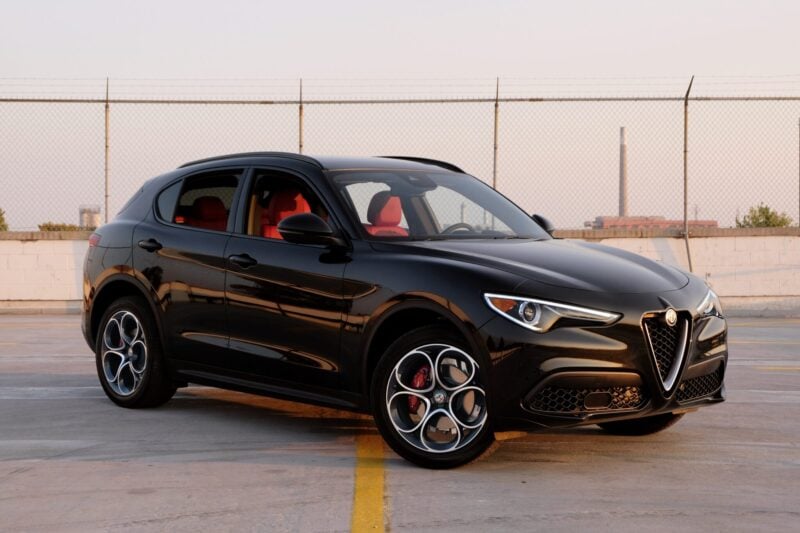 Fair warning to our international readers here: things are about to get locally Canadian for a minute... 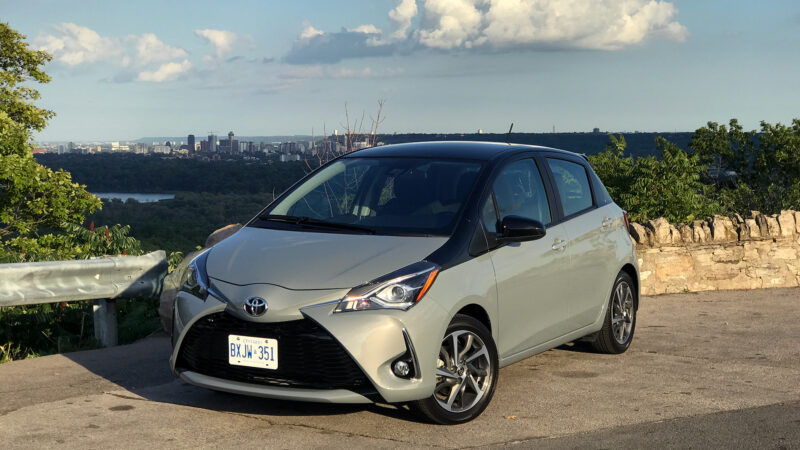 “Know your enemy, know his sword.” 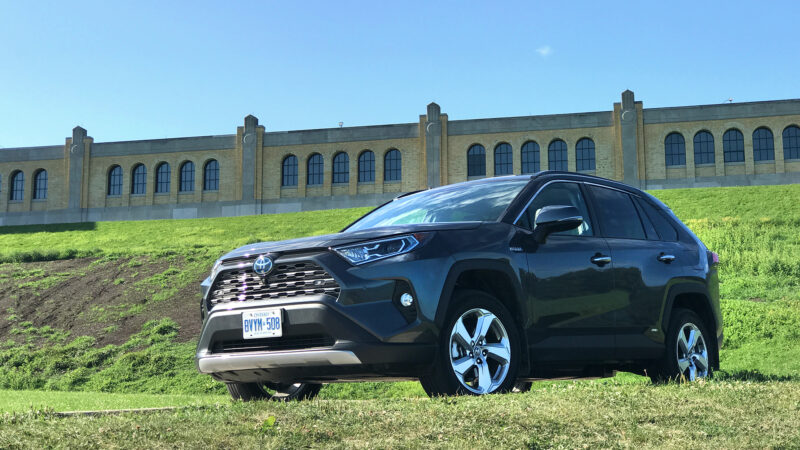 There’s not many marques that survive 30 years in the original mold any more. Even some of the most venerable badges have either had breaks in production, or have switched things up a bit to pander to market tastes... 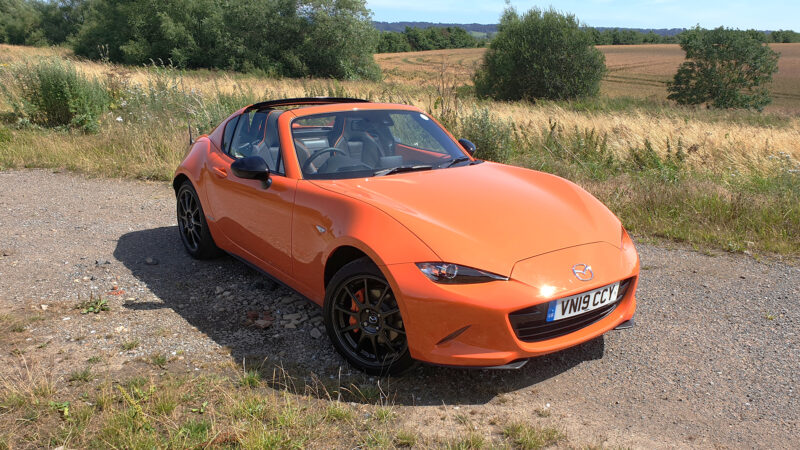 Depending on where you stand, that title will elicit either a nod of approval or a beeline to the comment section to tell me how wrong I am. That’s the magic of the reborn, fifth-generation Supra: there is no middle ground for it in the court of public opinion... 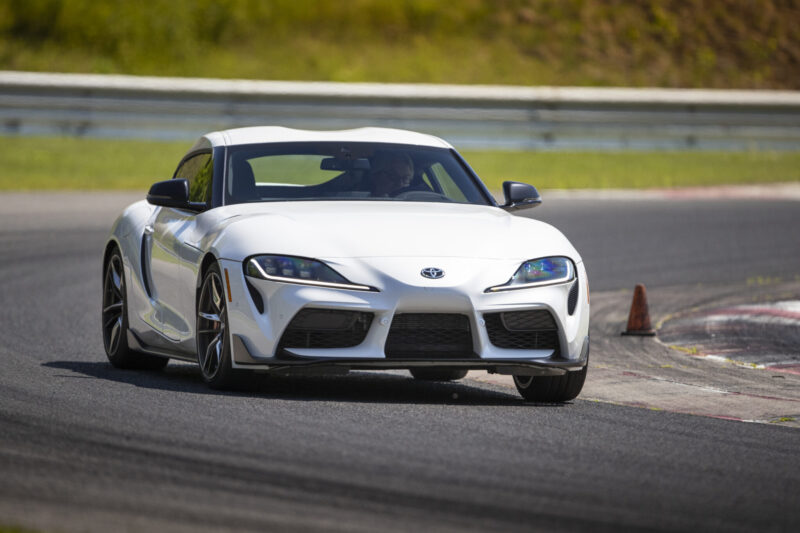