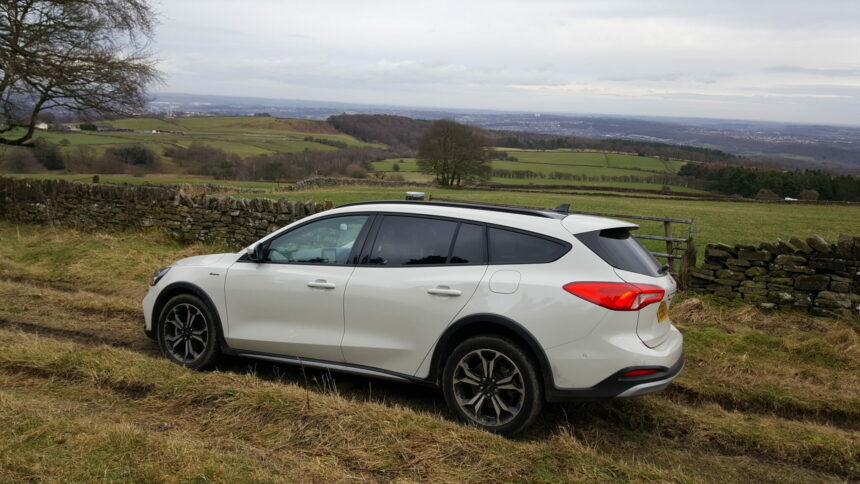 Which is better: a good family estate car with normal car manners and space in length; or a crossover SUV with high driving position, oodles of headroom and at least a fighting chance of off-road progress?

It seems to be a perpetual debate among car enthusiasts, car owners and vehicle manufacturers. Moving from one to the other, as we often do, it’s easy to see the charms of both.

Some carmakers have clearly been having this conversation with themselves. Why not, they think, make a family estate car that looks a bit off-roady, but isn’t a giant blob that no-one can see past? We’ve been out in the wilds of the Peak District to try out one of the newest: the Ford Focus Active.

What’s Active about it?

In this context “Active” means “higher-riding, plus cladding”, although there’s an obvious double-meaning here. It’s a “lifestyle” car, for people who are active.

Ford has a whole range of these Active cars, with the dinky Ka+ Active starting it off and Fiesta Active in the middle. They’re essentially crossover-type vehicles without being the full-on SUV body. That means you get a vehicle that’s almost entirely car-like, but with a little extra ground clearance.

There’s also a terrain control dial that manages the traction and stability control so you can make progress on mildly terrible surfaces without needing a four-wheel drive system. Add in the ruggedized looks and you’ve got a car that’s a gun safe and a light bar away from starring in a zombie movie.

Any other differences from the regular Focus?

All of the effort here is on making the Focus Active look tougher, along with that mild lift – it’s about an inch at the front and an inch-point-three at the back – to give it some ground clearance. That, the terrain control dial, and a few “Active” badges dotted about ultimately make up the sum total of the physical changes.

The kit mix in the Active, particularly our Active X estate here, is unique but to spec a regular Focus to the same level is only a few options boxes away. You do have the choice of a couple of unique body colors though. Otherwise everything you see and touch is the same from Focus to Focus. 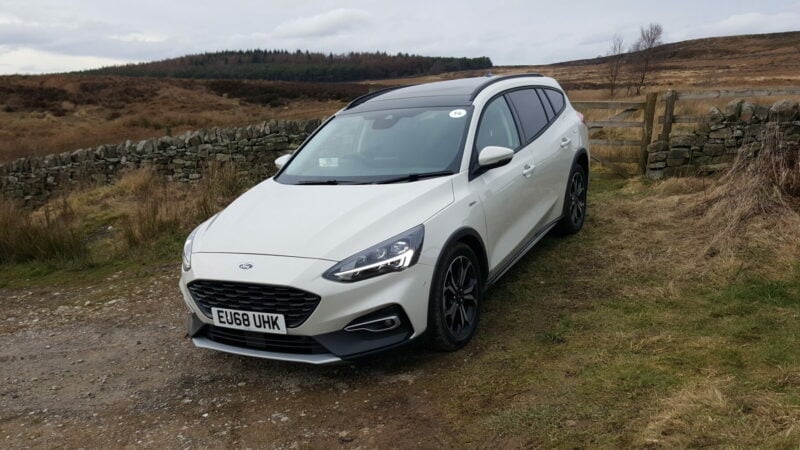 Does the lift affect the drive?

Ford has long tried to keep the Focus at the head of the pack when it comes to handling and driving fun. The first Focus was the first car in the class to have independent rear suspension, with its “control blade” system, and while not every other manufacturer has followed suit yet (some even switching between generations and indeed models), it’s a feature Ford continues to stick to.

Lifting a car isn’t exactly conducive to handling, but the Focus Active doesn’t really seem to suffer. Particularly in the estate form, it’s still a great deal of fun to chuck about (apologize to the labradors later).

You won’t get the sensation of the Active teetering over one tire as the weight transfers ponderously over and beyond it. There is a sense of slightly looser body control, but no more so that in another manufacturer’s ordinary hatchback. The Focus’s typically agile steering is unchanged, and that certainly helps the Active feel nimble too.

The benefits to ride comfort are far more noticeable. We’ve always been in two minds about the ride quality in smaller Fords (more so the sporty ones), but the Active has no such concerns. There are smoother-riding cars in the Focus’s C-segment, however the Active is pretty hard to fault. That extra bit of travel and the slightly larger tires makes a world of difference – and the estate seems especially good in this regard.

Ultimately that all rather makes the Active the better car than the regular Focus. Unless you’re habitually driving at 10/10ths – or on a track – chances are you won’t notice the slight handling compromise.

As for off-road… well, the Active is, despite appearances, not a proper off-roader. There is no four-wheel drive system, nor will there be – the Active is not intended to get any further away from a paved road than a festival car parking field. That said, the surface control dial makes a pretty good fist of keeping the car going over the green stuff, and that extra inch will preserve vital areas from stray rocks.

Our test car here used the 148hp, two-liter diesel, paired to a new eight-speed auto. Having tried some other combinations too, this certainly seems to be the sweet spot of the range. Although occasionally hunting around for a ratio near 50mph, the auto is the best of its type we’ve seen from Ford yet. 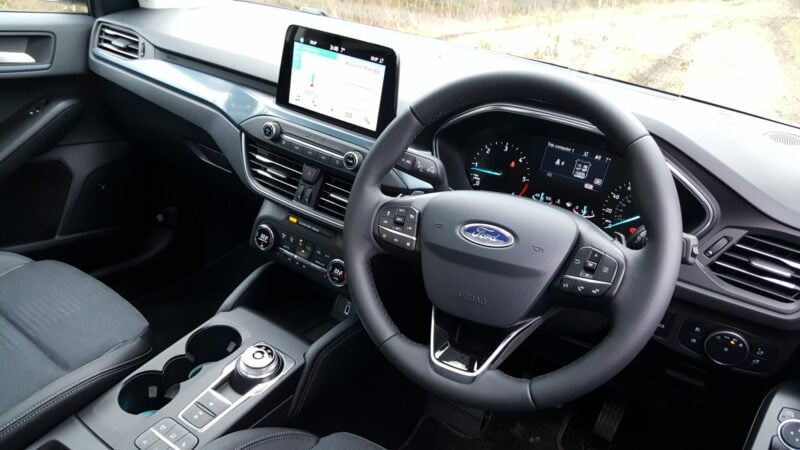 How about the cabin?

There is almost nothing to distinguish the Focus Active’s cabin from the regular Focus model. That’s equal parts positive and negative; there’s no sensation that you’re in anything but a Focus, but we wouldn’t mind some internal mirroring of the ruggedized exterior.

The Active’s trim levels are worth a note though. Ford has based the Active’s two grades, Active and Active X, on the ST-Line and even priced them the same, but there’s a few extra pieces of kit just to demarcate the cars.

In terms of general feel, it’s typically Ford. It’s not the most beautiful or plush environment, but everything falls pretty easily to hand and reasonably well put together. 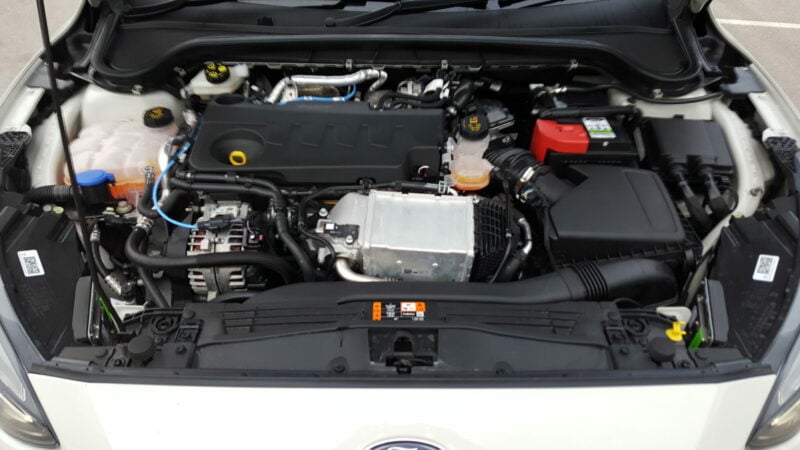 There’s some quite unashamed “lifestyle” advertising going on with the Focus, and that rather reveals the target buyer. If you like long hikes in the country, or mountain biking, or camping, or dogs the Focus Active is for you. In fact we reckon you won’t be able to find a bike trail car park without one of these in it by the end of the year.

But there is some wider appeal too. Essentially the Active is a no-more expensive, slightly comfier family car – particularly in estate form – and it makes a pretty good fit for family life. Despite the popularity of crossovers, a lot of buyers are still turned off by their excessive road presence, and the Focus Active looks set to snap up that market.

Well, it’s not exactly a unique idea. One look at Volkswagen confirms that, with the Golf Alltrack, SEAT Leon X-Perience, and Skoda Octavia Scout all fighting for the same bit of slightly muddy National Trust car park space. All offer four-wheel drive too, which helps push even the base prices up to what a fully loaded Focus Active will cost you.

That aside you’re pretty much looking for small crossover SUVs, and you’d be nothing if not spoiled for choice. However the point of the Active is that you don’t have to have a crossover, so chances are it’s simply going to rival other C-segment hatchbacks and estates. 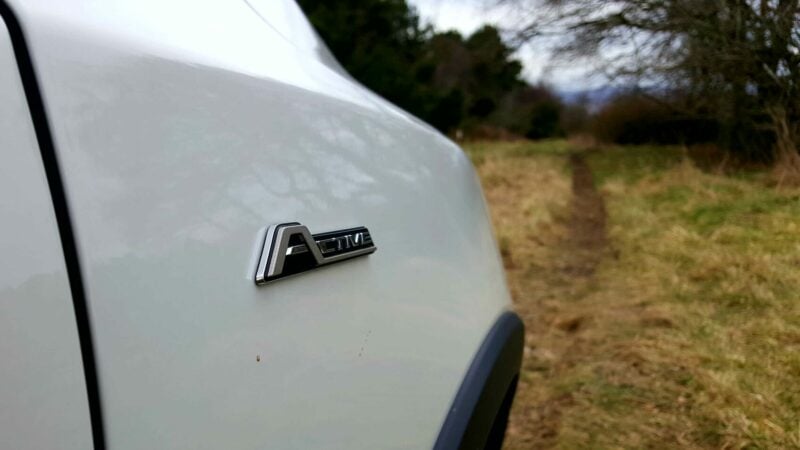 As we mentioned above, it’s not really a novel move to jack a hatchback (or estate) up a bit and slap some black plastic cladding on it. It’s a look a lot of pretend off-roaders use, largely because it’s borrowed from real ones.

But the Focus Active isn’t pretending to be an off-roader, and Ford is pretty open that it doesn’t have four-wheel drive and won’t. That’s not the point of it – it’s supposed to be a family car that you can take to your favorite woodland camping or hiking spot without getting nervous about rocks puncturing the sump or rain trapping you in a slippery car park.

Stripped of the “lifestyle” pretensions, the Active is actually a nicer-riding version of the Focus, and it does seem to carry the look pretty well. Add in the fact it’s no more costly than the mid-range model it’s based on and it’s little wonder that Ford reckons the Active will make up the largest single proportion of Focus estates it’ll sell.

An excellent alternative to bulky crossovers, without any particular penalty over the regular Focus. 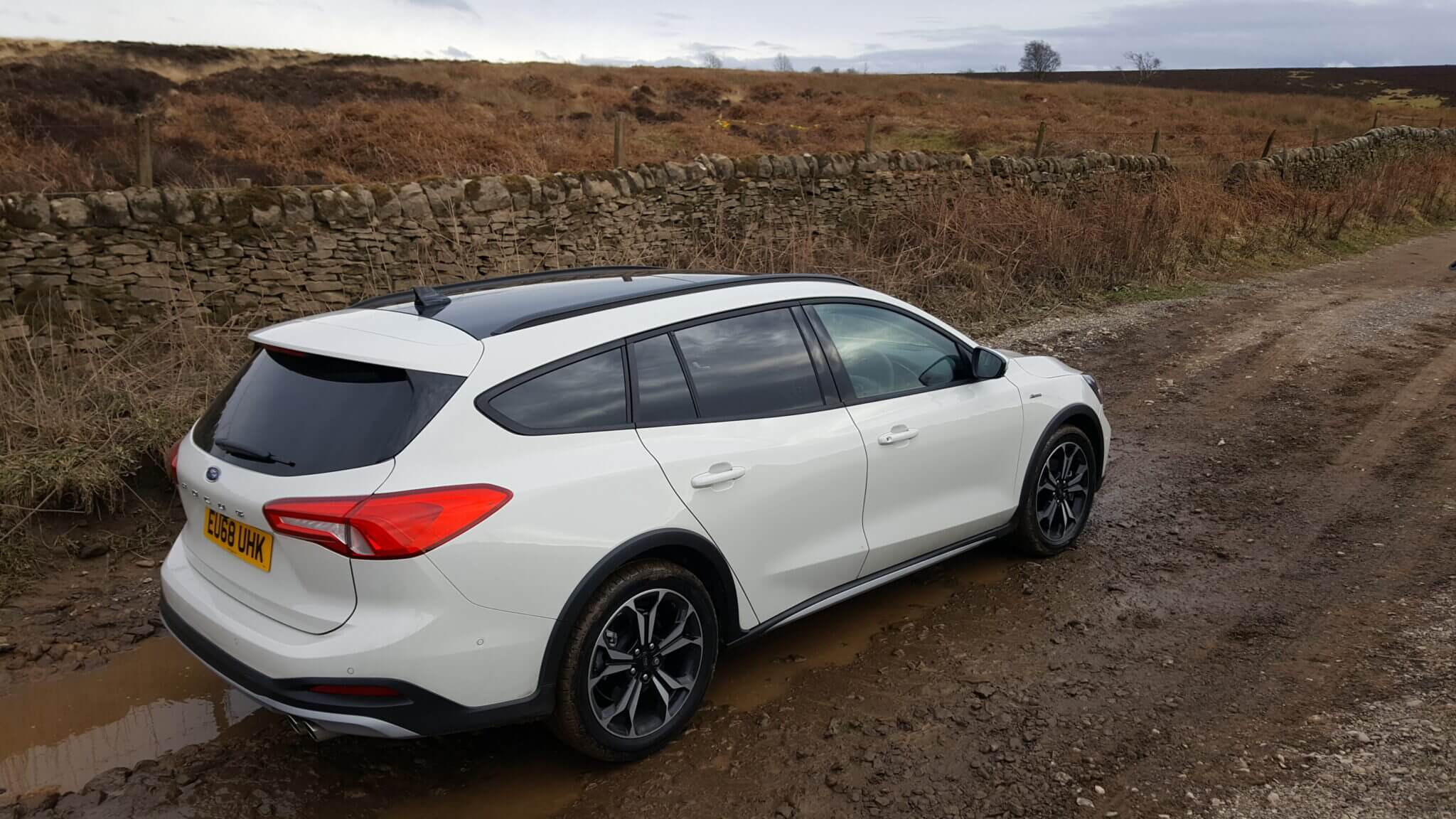 Performance
Not stellar performance figures, but solid in the real world. Plenty of torque for overtakes though.
Ride & Handling
The extra ride height doesn’t significantly harm the handling, but gives a much-needed boost to ride quality.
Space & Comfort
If you can’t fit all you need into a Focus Estate, you’re not trying hard enough. However, others in the class do offer more.
Equipment
Solid standard specification, and a decent range of extras won’t leave you short of vital kit.
Value
Even though the options on our car bump the price up a bit, there’s still a lot of car, and toys, for your money.

First DrivesFord Focus
7 Comments Discuss this post in our forums...
Test Your Badge Knowledge With Our Car Logo Quiz