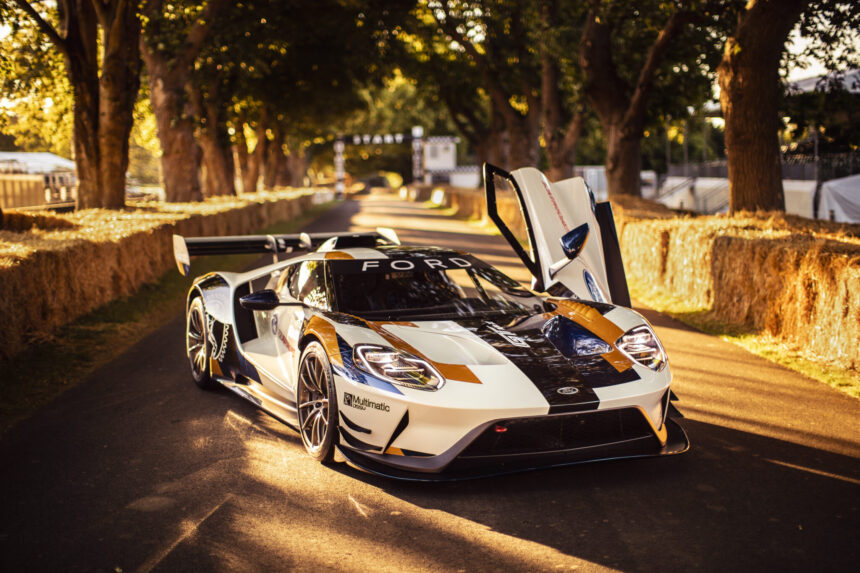 Ford has sharpened up its GT supercar and unveiled a new track-focused variant at the 2019 Goodwood Festival of Speed. The new GT “Mk II” is the result of development between Ford Performance and Multimatic, who developed the Le Mans-winning GTE race car.

The Mk II takes the technology from the GTE and turns it up to the extreme. The result is a hardcore GT that has been developed to be free of racing regulations.

The 3.5 liter twin turbocharged V6 has been boosted over the road car, meaning the Mk II now produces 700 horsepower. The engine also features a new outboard air cooler with a water spray system.

The system operates automatically at high temperatures by spraying water onto the air cooler, providing consistent power for the engine. There is also a new roof intake to provide additional engine and transmission cooling.

The GT’s seven-speed dual-clutch remains, but has undergone extensive recalibration.

The GT’s biggest changes come from new aerodynamics. The Mk II features a new fixed rear wing, along with front fender louvres and dive-planes. The new aero package means the Mk II generates over 400 per cent more downforce than the GT road car.

The interior has also been given a racing makeover. The Mk II features a full rollcage and fire extinguisher system. For added weight saving, a bespoke Sparco racing seat replaces the standard driver’s seat. For those that want to bring a friend to their track days, a passenger seat is an optional extra.

Sadly, the GT Mk II has not been homologated for road use, and can only be used on the track. If you want one, then you’ll need to be quick. Only 45 units will be produced, with prices from $1.2 million.

FordFord GTGoodwood Festival of Speed
822 Comments Discuss this post in our forums...
Can You Beat the Impossible Gran Turismo Quiz?