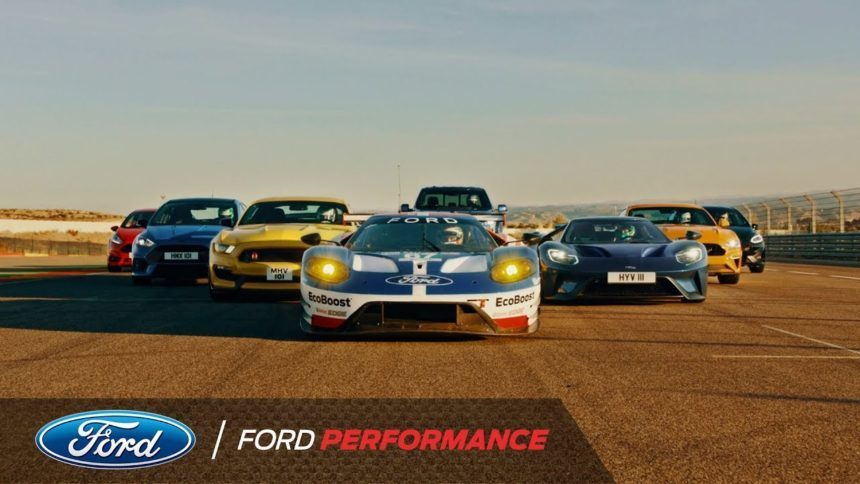 We’re sure you can dream up a ton of fantasy matchups between improbable cars. Maybe you even took to your favorite racing sim to see the outcome. Ford, however, took it one step further with its latest performance showdown.

For the race, Ford chose Motorland Aragón about 150 miles outside Barcelona, Spain.

At 3.3 miles it’s a mix of tight corners and a high-speed straight. Aragón is the perfect playground in which to give these vehicles a proper shakedown.

To pilot the collection, Ford looked to its Chip Ganassi team of drivers to take the wheel. Give racing drivers any excuse to flog cars around a track and they’re sure to have a good time.

To keep things fair, Ford staggered the start times of each vehicle from the slowest to the fastest.

Off the line first was the Ford SVT Raptor driven by Ryan Briscoe.

A race car this is not. But with its twin-turbo 3.5-liter V6 putting out 450hp, its one of the fastest trucks on the market today. As expected, the knobby all-terrain tires struggle to contain the three-ton heft around the bends.

Still, it put up a valiant effort until near the end of the race. It crossed the line with a time of 2:30.65.

Setting off 11 seconds later, the 2017 Fiest ST sped away with Dirk Müller behind the wheel.

The little hot hatch gets a ton of praise for its fun factor. Just watching it lap the track we can easily see why. Planted in the corners and surprisingly quick on the straights it held its own.

With its 1.6-liter Ecoboost four-pot, it turns out 197hp. Nothing major, but a far cry more than the 120 the base car comes with. 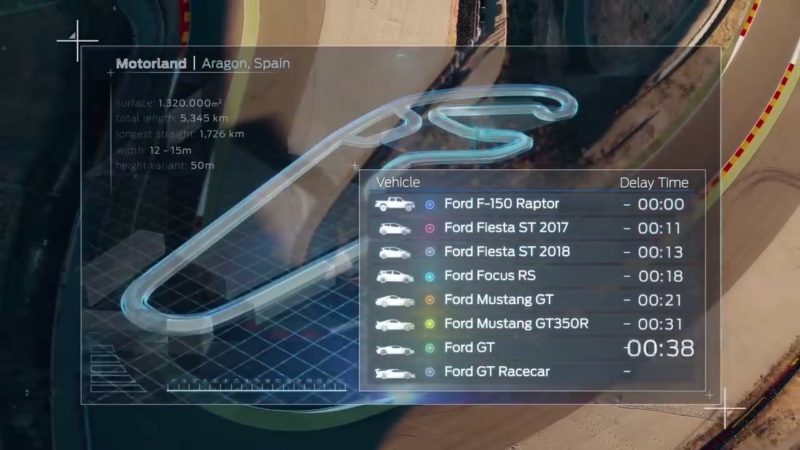 The all-new 2018 Fiesta ST set off two seconds later. Driven by successful LeMans driver Harry Tincknell, he was out to reel in the ’17 Fiesta.

Surprisingly for the ’18 model, Ford dropped the 1.6-liter for a 1.5-liter turbo three-cylinder engine. However, despite losing a cylinder, it didn’t lose any horsepower, and gained fuel economy. Not that it really matters on a racetrack though.

With its better chassis and more refined handling, the newer ST beat out its predecessor — although just barely. In the end, it finished with a time of 2:16.56.

Throughout the run, Westbrook opted to keep the car in “drift mode” which amped up the fun factor. The AWD drive system kept the car in check most of the time though.

With 350 ponies from its 2.3-liter four-cylinder EcoBoost, it screamed around the course. At the finish line, it clocked a time of 2:11.

Next, the Mustang GT roared to life with Stefan Mücke in the driver seat.

For a car that was dreadful around a circuit for such a long time, each new revision of the Mustang seems to get better and better. The GT looked stable through the corners and let out a growl down the straight.

Since this is the newest version of the GT, Ford didn’t have the official horsepower numbers. However, it estimates the 5.0-liter V8 will have around 445 horses in the stable. This is up from the 435 hp the 2017 model gets, though not quite as much as the new Bullitt.

Following the GT was the more track-focused Mustang GT350R driven by Joey Hand.

With 526 hp from its 5.2-liter flat-plane crank V8, it’s the most powerful Mustang you can currently buy from Ford. It’ll remain that way too until the 2020 GT500 hits showrooms packing 700 rampaging stallions.

In addition to gobs of power, the GT350R also eats race courses for breakfast. With carbon fiber wheels, a tight chassis, and tuned suspension it slays corners.

This is why it wasn’t surprising to see it dip below the two minute mark with a 1:58.14. 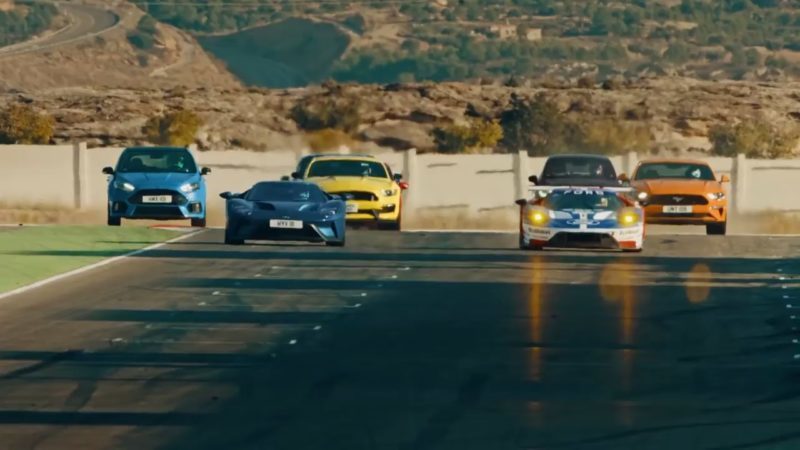 Seven seconds after the GT350R, the Ford GT road car set off with Olivier Pla manning the controls.

This second generation takes a new approach to the supercar. Instead of the beefy V8 of its predecessor from the early 2000s, it instead opts for a twin-turbo 3.5-liter V6, similar to the one in the Raptor. However, with 647hp on tap, it carries a bit more of an aggressive tune.

To the surprise of no one, the GT road car jumped out to a quick lead and stayed there until the final straight. It cut around eight seconds off the GT350R time too with a 1:50.02.

The final car to set off was the Ford GT race car driven by Andy Priaulx.

While it shares many similarities to its road-going counterpart, the huge aero package and light weight make this the fastest vehicle of the bunch.

Even after giving the Raptor a full 48-second head start, it cruised past it with little effort. Guess that’s why they don’t race an F-150 at Le Mans.

It did have trouble with the road GT though and only managed to slide past exiting the final turn. However, it gained a ton of ground on the straight to finish with a time of 1:40.

While the race didn’t show us anything we didn’t already know, it was still good fun to watch.

If you fancy having a go at a race like this yourself, you can almost make it happen in Forza Motorsport 7. The only car missing is the 2018 Fiesta ST. Everything else is there, or at least nearly there with only minor performance differences.

Ford
16 Comments Discuss this post in our forums...
GT Sport Exhaust Tip Quiz: Guess the Car From the Exhaust!