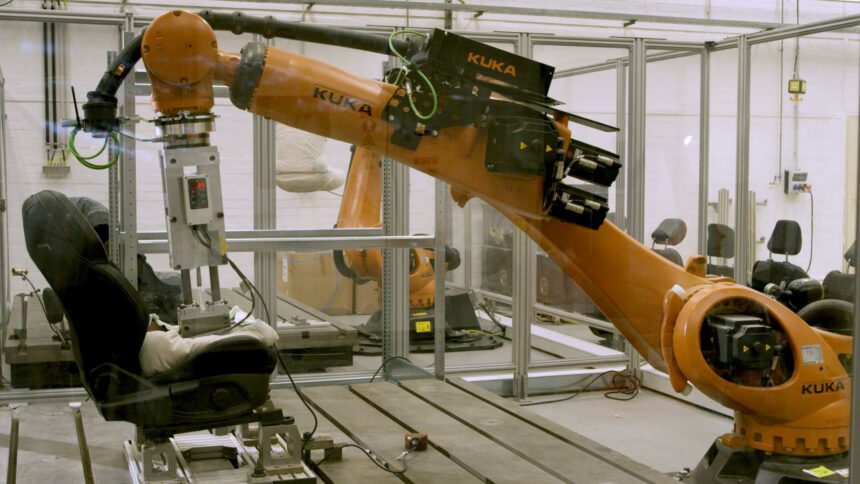 Car manufacturers go to great lengths to ensure that your new car stands the test of time. Their research and development facilities simulate years of use for components and mechanisms, so that a five-year old car still feels like a new one.

Ford, it seems, is going one step further. Apparently concerned by how going to the gym affects your car’s seat, it’s developed a new testing mechanism: Robutt.

Robutt is, just as the name sounds, a robotic bottom which consists of two parts. Firstly, the Ford scientists have designed a dead-weight derriere to closely mimic the properties of the human behind. That’s then coupled to a robot arm to emulate movement and weight.

Over the course of three days, the robotic arm presses the fake rump into the test seat 7,500 times. In addition, it also twists and rolls the hind, to simulate ten years of wear from real human buns.

But the butt itself is no simple synthetic posterior either; Robutt is as warm as a human tush, and unusually sweaty too. During the test cycle, Robutt leaks a full pint of water, warmed to a very human 97°F. That’s to ensure that the seat stands up to a decade of heading to the gym every day.

Florian Rohwer, development engineer in the body and chassis labs at Ford, comments:

Cars are a part of our everyday lives, and at this time of year in particular, so is exercise. The ‘Robutt’ is a great way to check our seats will look good for years to come.

Ford
7 Comments Discuss this post in our forums...
Can You Beat the Impossible Gran Turismo Quiz?