That question could be answered better with Gran Turismo 2. You had 10,000 cr for starters and you go get either the Prelude or a Civic Si or something that was fast, and looked good. Then you started getting into the BMW or Mercs to try the FR races and so on. In GT Sport you get some free cars out of a roulette. There's 500 less cars in the game and incredibly even with much much less cars than before you still get duplicates such as the Renault Clio RS or the Road Car versions of some...

There's a lot of things that would affect decision making in Gran Turismo.
1. Nostalgia.
2. Availability (which as of now, is still very limited).
3. Free gift cars.
4. Races where you're actually allowed to use them (ehm Sport Daily Races).

This is kind of cool and it seems like it would be a good tool to gather one data point on what vehicles might be popular. I assume with enough data points, a manufacture might take a look at a vehicle not for sale in a certain market and considering bringing it there. The Nissan GT-R is a good example of this since I don't think Nissan really had it in its grand plan to sell it here in the US. But between video games, movies, etc. enough buzz was generated that made it look to see if the car would be viable here.

I'd be curious to see what the data looks like from PD. I know they're probably not going to release it, but it would be interesting to see what people buy in game.

I hope brands don't take it seriously. Diversity of cars is a part of GT spirit.
In facts, if the game add a farm tractor, I surely buy it.

PS: Something interesting, what is the freedom's level of GT in the choice of car models, when a brand agrees to appear in the game? (even if it differs according to the brands)

I didnt understand at all the sense of Yamauchi's words...

After much research, Toyota will now offer sirens on all models.

I suppose the order in which the cars appear at Brand Central is a factor.
Whenever I get close to $20m, I go buy another car because that way I can bank some funds, and sell the cars if I need to, later on.
The first place on the list is the Ford showroom. So, I've purchased a ridiculous number of Gr.4 Mustangs.

I tend to buy the cars that haven been recycled from the previous games. Definitely don't use Skylines, Evos or Imprezas. Don't take this the wrong way, I'm personally not into using them in every game.

@Famine What’s with your fascination with always phrasing interviews as a “round-table” interviews?

Did you make it to the Sydney show? I looking around for a ginger haired fellow with a body like a wombat but couldn’t find one.

BjoBosUndies
@Famine What’s with your fascination with always phrasing interviews as a “round-table” interviews?
Click to expand...

BjoBosUndies
Did you make it to the Sydney show?
Click to expand...

BjoBosUndies
I looking around for a ginger haired fellow with a body like a wombat but couldn’t find one.
Click to expand...

I mostly buy road cars and just sell them when the daily roulette gifts me duplicates. I tend to hold off on the bigger purchases (race cars and unicorns) until I've amassed 10-20 million credits.

The Pool Of Life.

breeminator
I've always thought that the colours people choose when they buy cars in the game is valuable information they could sell to manufacturers.
Click to expand...

There are some colours in the game which don't show well in the game, but can look amazing irl. Black is the main one, where the detail is just lost. The same with white and some other colours. I tend to have a lot of red cars because they look good in game. I also have a Coca Cola livery addiction, but the cars generally look good in red.

I believe PD have data of cars bought for real money, as well as distinguishing between gift cars and cars bought with Cr.

If the game is keeping tally of how many cars bought by a player(in the Menu section of player stats), the DWG probably doesn't count. I say that when looking at the Supra survey. Kaz said over 600,000 were sold.

The Gr.4 Supra, is(if you did the survey, the car will be gifted until June, 2020)/was gifted based on receiving the GR Supra as a gift or buying it with Cr.
How does the game know a player was gifted a car or bought one, to gift the prize? PD have to have that data. So, just because someone is gifted all cars and never buys any car from day one, it's possible that player isn't included in the total sales of a car.

Sounds a bit like manufacturers want to leverage there licensing fees more effectively!

I think the purchase information would be useful, granted they use new player's information. From the start, you win a LOT of Gr.4 / low level N class cars, but what are the models that players buy because they can't bear to wait to win them?

Like myself, for instance, who despite winning a Gr.4 Mustang and a Lancia Delta in my first hour of play, bought a 22B because I was really looking forward to getting one.

...and if they returned to GTSport, I'd buy every single one 10 times over each!

I pretty much buy one or two cars needed for the next event in the game's progression.

EDIT: Gave it some thought, I like obscure classic/vintage cars from all the regions.
Last edited: Feb 18, 2020

I like red cars. Does your company sell red cars? I like blue cars too. Green ones are nice. I don't like yellow cars unless they are fast. I'll never buy a purple car, wait I just did. I Like Cars.
R

Without stating the obvious and in fact, the underlying goal of each GT iteration and what transpired out from the beginning, IMHO, is what makes GT so good compared to any car games that ever existed:

Kaz's goal to make us love and discover cars as arts, as sport, as a lifestyle, as motivation, beyond means of transportation is more than noble, and just for this simple reason alone, makes GT more than a game... More than a mean for us all to compete, more than a money machine...

Thank you Kaz and PD for all your hard work and effort in this endeavor.

darioL
I didnt understand at all the sense of Yamauchi's words...
Click to expand...

Learn to read between the lines...

Mass purchase of some crap hatch by all players on the same day would give the analysts something to chew on.

You had to put the Supra Gr4 as a thumbnail to hurt my heart more? I'm pretending it doesn't exist in GTS

Betty blue
You had to put the Supra Gr4 as a thumbnail to hurt my heart more? I'm pretending it doesn't exist in GTS

CTznOfTime
Learn to read between the lines...
Click to expand...

i'm as naive as they come

It's not a thumbnail. It's actually this size or bigger... 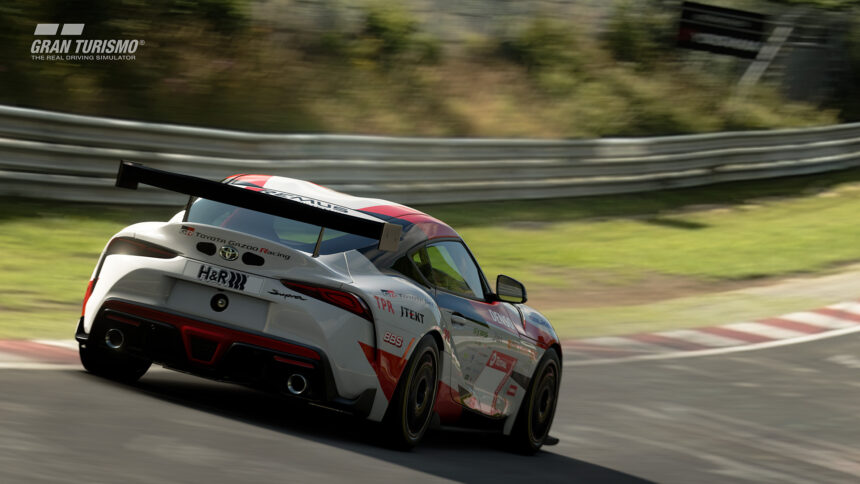 05XR8
It's not a thumbnail. It's actually this size or bigger...

Betty blue
You had to put the Supra Gr4 as a thumbnail to hurt my heart more? I'm pretending it doesn't exist in GTS

Given the reference made to Toyota it amused me to use an image of a Toyota that you can't actually buy.

Famine
Given the reference made to Toyota it amused me to use an image of a Toyota that you can't actually buy.
Click to expand...