Signing my friend up.

R1 will be postponed unitl further notice until PD fix the SF19 Lobby glitch. In place of R1 tonight, An Exhibition Race will take place at Interlagos.

I trust you all to run stock setups but if you don't you will not benifit as it will be banned for the season once the issue is fixed.

Can we have another track? I just hate this "interlgos", never race it in gt sport.

buraspo
Can we have another track? I just hate this "interlgos", never race it in gt sport.
Click to expand...

It's on the calendar so it'll be good practice.

Also tonights Exhibition will use our season format so make sure to read up on the procedure and rules etc.

I still hate it.
What's your psn ID or who I need to add?
I may have problems with the livery, I will add Ferrari mark now

buraspo
I still hate it.
What's your psn ID or who I need to add?
I may have problems with the livery, I will add Ferrari mark now
Click to expand...

Lobby up. Remember No Tuning.

DynamicGT
Lobby up. Remember No Tuning.
Click to expand...

Can't find, should I restart game?

Driver Notice: Ok guys, we've had 2 Test races now. We are trying to come up with ways to make the closest racing possible. Right now all we have is Success Ballast which works great in DTM.

If you guys have any other ideas. Just let us know ASAP.

DynamicGT
Driver Notice: Ok guys, we've had 2 Test races now. We are trying to come up with ways to make the closest racing possible. Right now all we have is Success Ballast which works great in DTM.

If you guys have any other ideas. Just let us know ASAP.

Reminder to all drivers that DRL is aimed at drivers at a DR.B or below to give drivers who may not be up there on pace compared to A & S rated drivers, a place where they can race closey ans competitively.

Any A or S rated driver can reconsider entry if they wish as they will most likely be racing themselves as @PSN offapple said.

I know it may seem harsh but alot of leagues here on GTP are full of mega quick drivers and any new guy looking for a place to race may join them not knowing their pace just end up being lapped constantly which is no benifit to no-one. The main reason online games have a 'Skill Based' matchmaking system is to avoid this and give everyone an enjoyable experience.

Which is what we try to provide here at DRL.

I have decision to make, we either we delay SF for two weeks more until we can use no tuning and a shorter calendar or we can allow tuning and next week?

If anyone wants to back out over the delay just let me know. It's just out of my hands unfortunately.

Lobby for Race 1 tonight "should" be going up shortly!

PSN offapple
Lobby for Race 1 tonight "should" be going up shortly!
Click to expand...

Updated team name and primary sponsor, apologies for not doing it before the race.

El Oso, El Bandito, y El Vagabundo​
Round one was a resounding success for the Nuko Oso boys. After not having practiced for today’s race, driver GRM_Bandit was able to secure P5 in race one (while also finding his way into P2 for a short while) and P4 in race two (while also securing best lap with a 1:14.5). Driver John_Wanderin also had a good stint, but as fate had it, the #88 car had some mechanical issues throughout the race. The new pit crews of Nuko Oso forgot to replace the front nose of John’s car in both races, forcing the #88 into several unnecessary pit stops. All things considered, team boss offapple was pleased with both American drivers after today’s performance. GRM_Bandit was later interviewed by an independent reporter, and was caught talking about his teammate.

“I quite like him (John). He reminds me a bit of myself, and of another driver I raced with on Forza. He’s reserved, calm, and cool behind the wheel, and I like that about him. His personality counterbalances the over abundance of excitement and boldness Mika, Orama, and myself bring to the team (Nukeshot Motorsport and Nuko Oso). I think he’s gonna have a good season, but whether or not he admits it is a different story.” 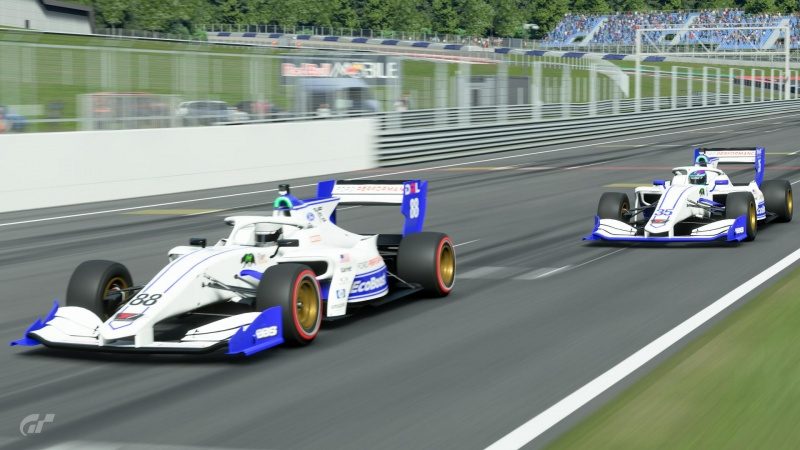 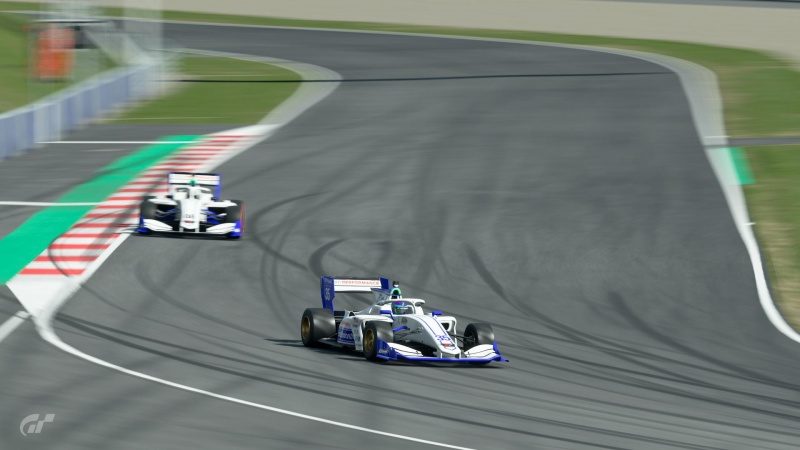 @D-Max Just show up tomorrow anyways lol. But don’t decimate the field like you did last weekend in DTM

GRM Bandit
@D-Max Just show up tomorrow anyways lol. But don’t decimate the field like you did last weekend in DTM

promise I won't! Last week was odd. Didn't like the car and basically a stock setup!

I have a Super Formula League as well for anyone interested. Not to go against this one but this league is on Wednesday Nights. Had 8 drivers last week, looking to fill up the room for more competition

The Ballad of the Roarin’ EcoBoost
​
Round two of the DRL Super Formula championship was a trial of one’s patience. The race was red flagged twice because of turn one incidents, and there was still a large amount of crashing amongst the field. But one lucky boy at Monza was GRM Bandit. Well, at least in Race 1. The American was able to score a P2 finish, albeit that P2 is currently under review at the time of writing. Bandit also set the best lap, and DRL Super Formula course record (a blistering fast 1:29.310) for his second best lap in DRL SF, and his second course record for the season. 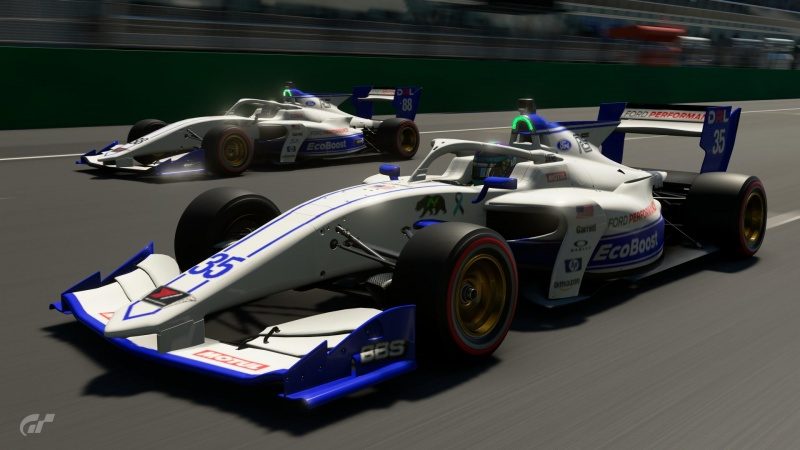 The twin Roarin’ EcoBoosts of John Wanderin and GRM Bandit
​
But even so, all good things must come to an end. After scoring a P2 in the first race, Bandit was sent to the back of the grid as per the rules for DRL Super Formula. A familiar sight to the almost ghostly apparition. After an overly cautious entry into the first chicane, Bandit did what he does best. He put his head down, hit his marks, and went for victory. Sadly though, a collision with the Honda of TSR Jimmie would end his hopes of victory. Bandit ended up suffering with a broken front wing, and Jimmie got a damaged rear wing. While Jimmie was able to carry on at a reasonable pace, Bandit was left to suffer the wrath of the broken wing. 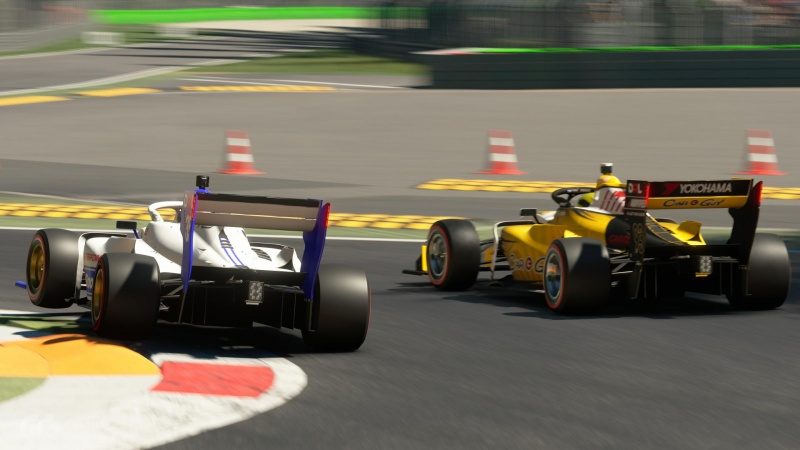 Bandit and Jimmie in the second chicane, the part of the track where Bandit’s crippling collision occurred​
Last edited: May 8, 2019

Round 3 BMB Inifield A Lobby Up.