Hi everyone! Welcome to the 3rd season of the GRO Global Rally Championship.
We are looking forward to having an another great and fun season! This idea of creating a rally series started when I was competing into a rallycross championship on GT6. That took me to host a WRC championship, however, seeing that it was complicated, it ended on being a failure. But while my old PS3 was broken and that I was still waiting for a new one, I already was planning to revive the idea of doing my rally championship and make it sucessfull, as there aren't very much rally championships which are sucessfull.

And also, the GRC-3 is a continuation from GRC-2, as the Organisation has commited a Huge mistake on making 2017 GRC season too short.

The third season of GRC will be containing only 5 classes with the main class being the Group B Rally Cars. Street cars, Red Bulls, Vision GT's, LMP Protoypes and Race Cars have been banned from competing in GRC-2 and GRC-3.

With that, the rally championship will become more realistic and fair without having to worry about the Race Cars.

1.4- The Sporting Regulations document are not definitive, therefore, they are sujected to the change at any time, for any reason.
2.1.1- The championship will have 8 rounds: 3 rounds in Time Trial Mode and 5 rounds in Point-to-Point track mode.

2.1.4- The Rally Event's deadline may be extended for 1 or more days if there are not enough finishers for the rally events or then if there were issues such as Technical Difficulties.

2.1.5- There will be One Practise Run Session and then, a Timed Run.

2.1.6- If you have done your runs and already have submitted your lap times, then you are not allowed to submit a new lap time. Doing so will result a heavy penalty, depending of how many positions you have gained.
2.2.1- There will be Point-to-Point tracks during the season for each rally event.

2.2.3- The “Free Run” event mode will be used in order to get the pictures from every rally event.

2.2.6- The times of the 5 special stages will be added to the total Lap Time of the rally event. Here's an example of a rally Event with a Point-to-Point track. This applies also for the Time Trial Events as well (see article 2.3).
View attachment 628559
2.3.1- During a Time Trial event, a specific number of laps will be given to a rally round, which will be acting as a Special Stages.

2.3.2- To be classified, a driver must complete the required number laps for each rally.

2.3.3- If you get disconnected during the rally, it will be classified as “Retirement”. They will be considered as a Mechanical Failures and they are unfortunate.
3.1- The point system in the Global Rally Championship will be as it follows: 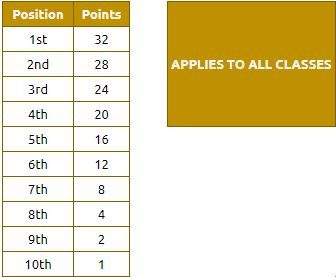 3.2- No points will be awarded for the drivers who get disconnected or rage quitted and there are therefore, considered as retirements.
4.1- The driver with the most points for the season will be crowned [2017 GLOBAL RALLY CHAMPIONSHIP DRIVER/MANUFACTURER/TEAM/COUNTRY].

4.4- If the two drivers have finished the championship with the same number of points and if they are on the same teams, they will be crowned as champions.
5.1- To sign-up, a driver needs to complete the following form like I did for the 2017 Global Rally Championship.


5.2- The numbers choices (#) are free, however, only the series champion of the Previous Season is allowed to use the number #1.

5.8- Entries will be reviewed after the 2017 Global Rally Championship has been completed, for the next season.

5.9- As the GRC-3 is a continuation from GRC-2, then the number entries (#) must be the same as GRC-2.
6.1- The drivers, who do not adhere to the Sporting Regulations, may be punished with penalties, point losses and even, with round bans.

6.2- If a driver feels agravatted with the incident which happened during the rally must send a Private message to the Series Organisers (Harsk100, MonGnoM, RoadRageDudes & J_Starscream) by PSN message or then by GTPlanet Private Conversation facility, so we can check the incident.

6.3- After the incident has been checked, the penalty will be discussed. Penalties will be given by the following situations:

6.3.1- Ghosting (pressing “START” button) to avoid damage is extremly forbidden and the penalties will be given if this incident happens.

6.3.2- Insulting, crictising, making racism and making fun of the drivers is disrespectfull and it will be considered as “Injury of Reputation and Honor”.

6.3.3- No Road Cars and no Race Cars are allowed to compete in GRC. Only Rally Cars from Homologation List are eligible for Global Rally Championship. If you use a Race Car in a rally, you are automatically excluded from GRC Round Results.

6.3.4- A driver may be disqualified from a rally event if he accumulates excessive penalty.

6.3.5- Repeated Violation of the rules will be considered as “Breaching the Sporting Regulations” and may result on the ban for the rest of the season.

6.3.6- The Series Organisers do reserve the right to exclude a driver or a team, at their discretion, from any round, at anytime and for any reason!

6.3.7- The Suspended Driver or Team will be informed about the Final Officials decision, regarding about a penalty or a suspension.
7.1- The lobby Settings will be used as it follows: 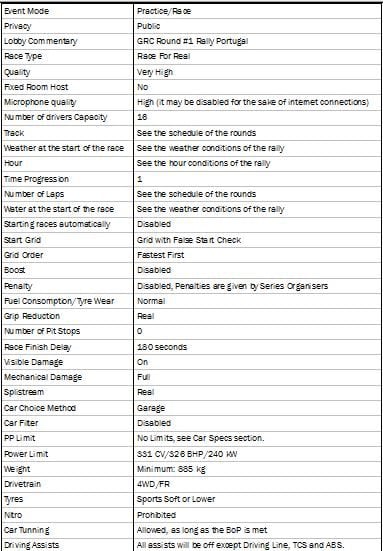 1.1- Because GRC-3 is a continuation from GRC-2, then the GRO Organisation has decided that the number entries (#) must be the same as GRC-2.

1.2- The GRC-3 Calendar is always sujected to the change, at anytime and for any reason!

Tagging some people, in case if they are interested...

Harsk100
Tagging some people, in case if they are interested...

Yes very interested. Something is a little wonky with my device. I can see the schedule except the first week. What date is that?

ERAUfan97
Yes very interested. Something is a little wonky with my device. I can see the schedule except the first week. What date is that?
Click to expand...

First week is from July 31st to August 6th.

So, anyways, with GT6 dying and drivers dropping out, the Schedule will have to be shortened to less rounds than expected. Simply because GTSPORT is coming on Autumn 2017 and as soon GTSPORT comes out, the GRO's attentions will be focused to GTSPORT and PCARS 2 respectively.

Therefore sadly, there will have to be only 4 rounds, so we can say goodbye to GT6 Rally in a better way. Who is willing to do those 4 rounds?

Just to confirm: Will you keep racing with Delta? Or will you change to Peugeot 205, as Group B is now homologated for GRC-3?

I'll use Delta please, but if can't Peugeot 205 will be okay

What year is the car?

John Wells
I'll use Delta please, but if can't Peugeot 205 will be okay

Yes count me in.

As Group B has replaced the Group 2/3 class, you have a Option of keep driving the Hyundai Accent Rally Car '01 or then change to another car, such as a Group B Car. 👍

As Group B has replaced the Group 2/3 class, you have a Option of keep driving the Hyundai Accent Rally Car '01 or then change to another car, such as a Group B Car. 👍
Click to expand...

No, im changing to the Audi S1

CrazyJohn
No, im changing to the Audi S1
Click to expand...

Have you not tried Project Cars Harsk, Sick Cylinder race series on there.

John Wells
Have you not tried Project Cars Harsk, Sick Cylinder race series on there.
Click to expand...

No John, not yet.

Sorry for double post, but I forgot that the Round #1 from Rally of Spain.

So, the GRC-3 Championship Kick-Off Round will have 3 stages, both in Point-to-Point Tracks. 👍

So, it's now time to confirm who will attend and who will miss the rally round!

Not sure when yet. I'll have to let the week play out a bit before I have a time. It definitely won't be before Wednesday because I work until that day

not sure when but I'm good

ERAUfan97
Not sure when yet. I'll have to let the week play out a bit before I have a time. It definitely won't be before Wednesday because I work until that day
Click to expand...

It's understandable, but I hope that you are able to arrange a day to do your GRC Runs.

epic_apri_39
not sure when but I'm good
Click to expand...

Just to make sure: Will you keep with the Group A Lancer, right?

Will you keep using the Delta? Or will you be changing to Peugeot 205 Turbo 16 Evolution 2 '86 which you did in last year?

A8 Evo VI as per standard 👍

How many laps Harsk

How many laps Harsk

Thanks John. Anyways, here are the results of Round 1. 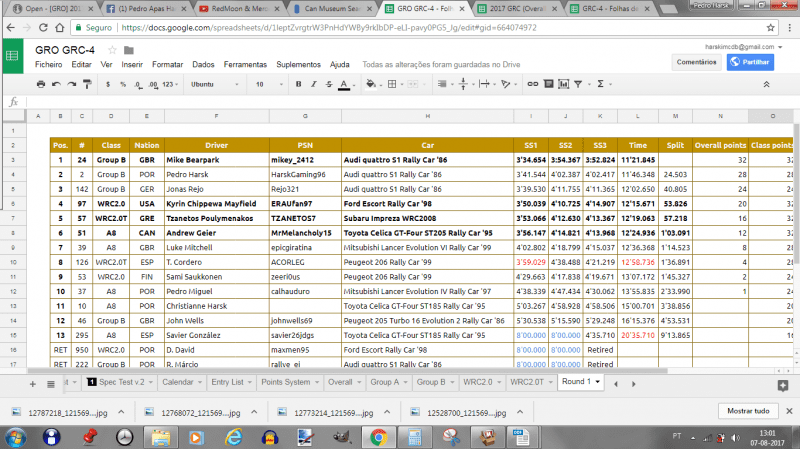 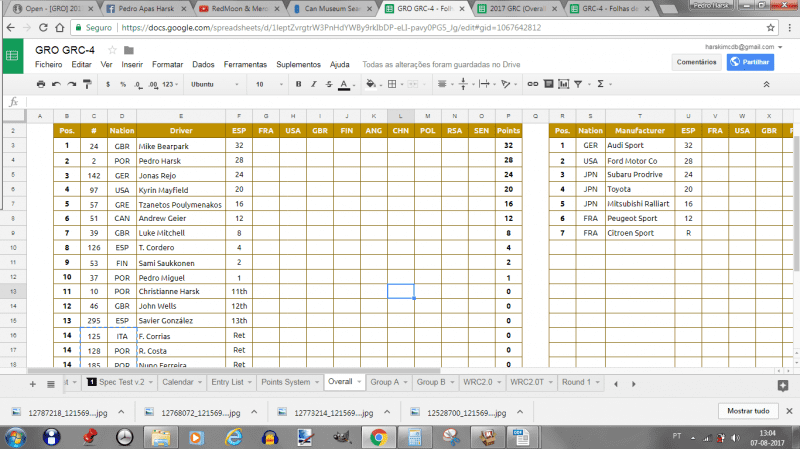 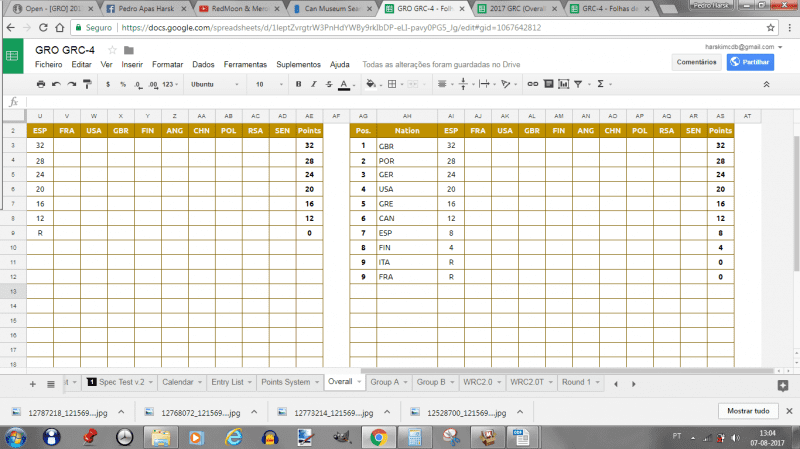 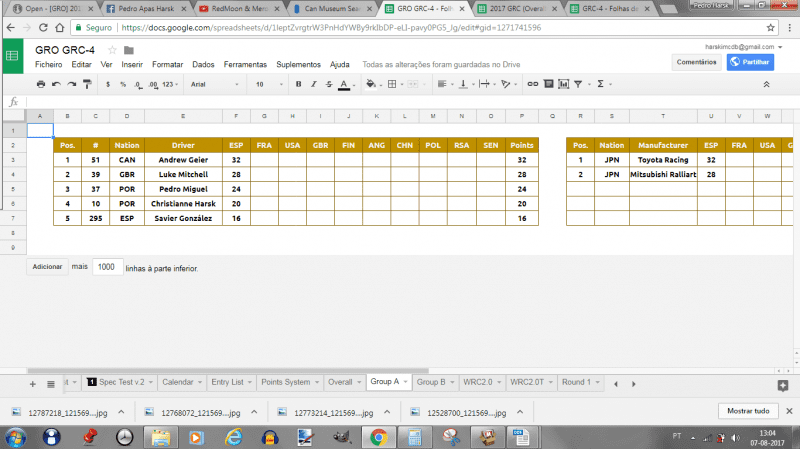 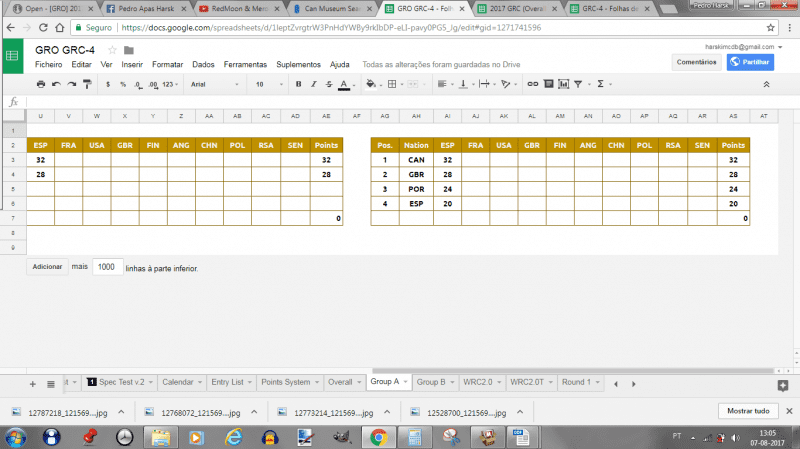 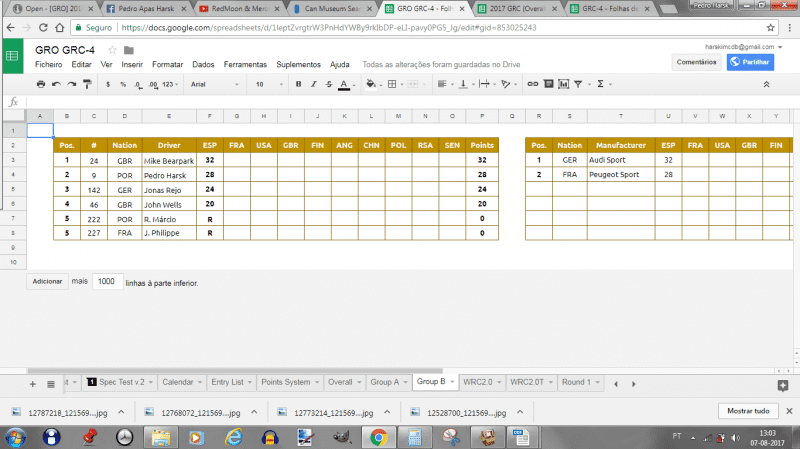 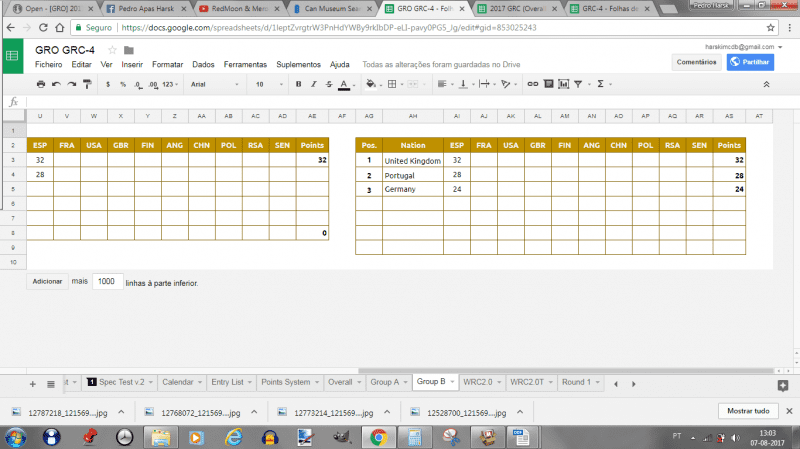 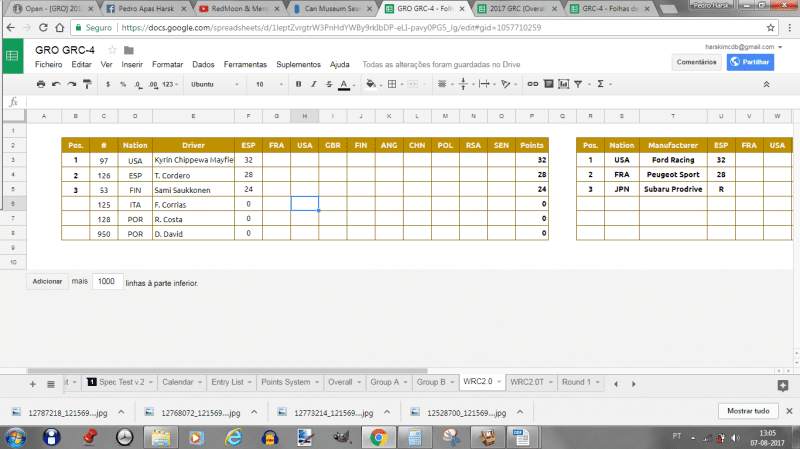 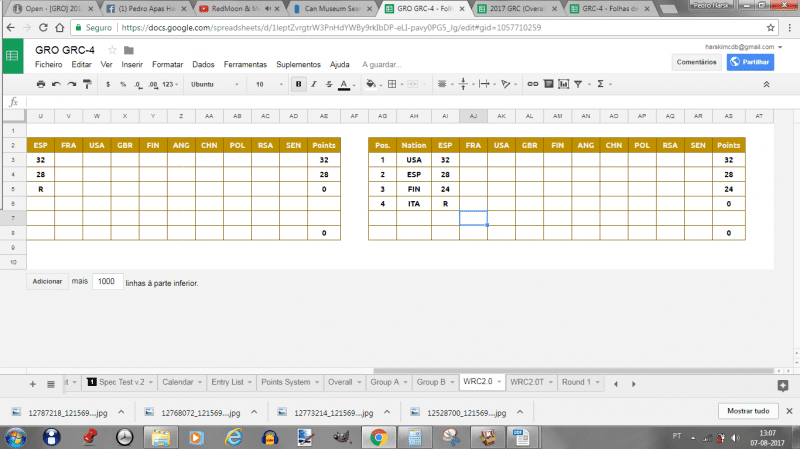 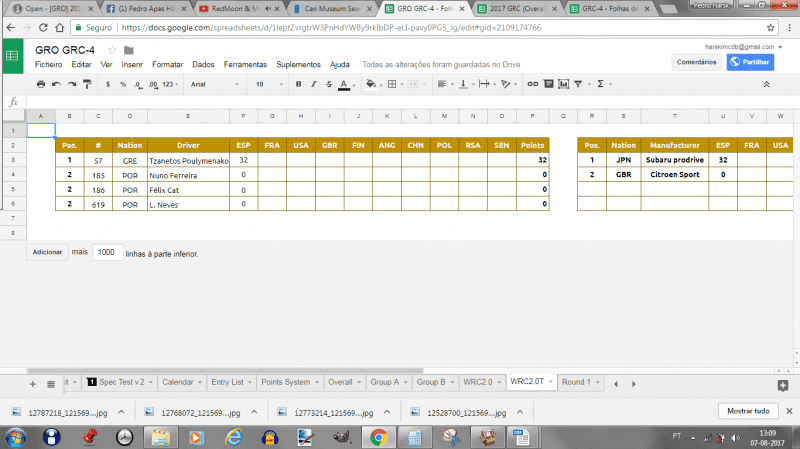 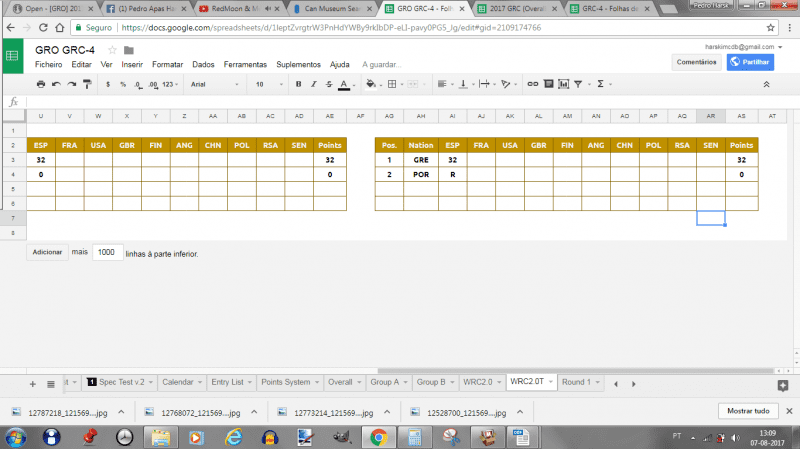 Note: The GRC-2 points will be mixing with the GRC-3 points to make the 2017 Overall Global Rally Champion. Thank you for taking part into Round 1 and see you for the next round, which will be the Rally of France!

Tommorrow, the Rally of France will be starting as a GRC-3 Round #2. The track will be the Circuit La Sarthe I (with chicanes, 2013 Layout), 3 Laps.
So, let's check the attendance list!

Good luck for the rally!