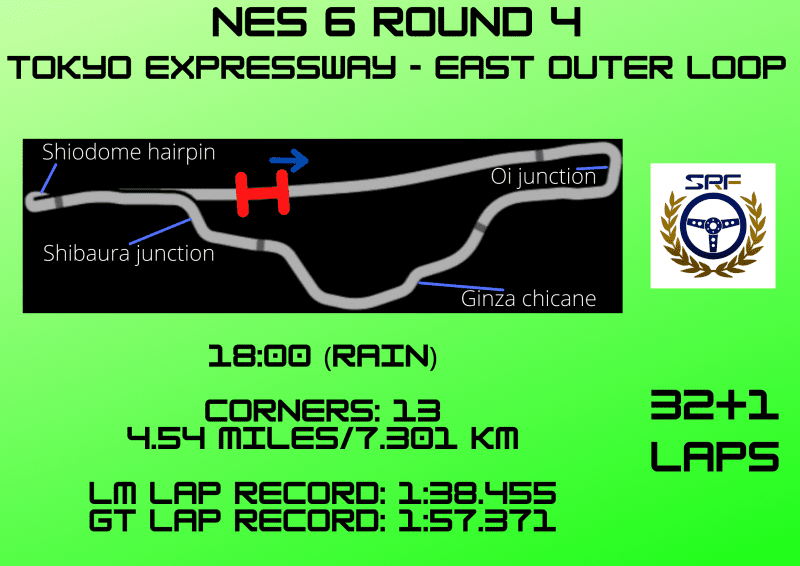 The Nukeshot Endurance Series travels to the capital city of Japan, Tokyo, for Round 4 of the season, taking place on the Expressway's East Outer Loop.


The Tokyo Expressway was constructed in 1959 as a means of transport around the Ginza district of Chūō-ku. Some of the routes have been condensed into original circuits by Polyphony Digital, with the East Outer Loop (EOL) being one of the most well known. The race will take place both at night, and in rainy conditions.

The start/finish line area is located in a tunnel, which will allow cars to get a bit of speed up before facing the wet tarmac. The surface is very smooth and the track tends to be very good for tyre life generally. Sector 1 comprises entirely of a slightly curving straight.

Crossing into sector 2, you are met by the first corner at the Oi Junction. The road has an upward gradient so you want to use that to help you slow down. Use the 150 marker as a reference point. On corner exit the road elevation levels, which encourages understeer. For this reason you want to aim for a late apex. The 2nd part of the junction goes downwards again so be careful on the throttle. It's followed by a short straight into a high-speed S bend.

Put yourself as far to the right as possible on exit of the S bend to set yourself up for the notorious Ginza Chicane. You want to take as smooth a line as possible, but also avoid turning in too early for the 2nd part and hitting the inside wall. In the middle of the chicane is a short tunnel that offers a smidge of dry surface, so don't be caught out. Go flat out through the following kink, and set yourself on the left for a high-speed right hander. This is followed by a slightly sharper left leading to the next junction.

The Shibaura Junction starts again with an upward gradient, but the left at the top is one of the easiest corners to misjudge your entry speed through. The following right goes downwards so once again be careful of understeer as the wall comes up quick

The final corner of the circuit is extremely crucial, as the Shiodome hairpin leads onto the very long start/finish straight. Careful not to brake too late, and be extremely cautious on the throttle through the corner. Also watch out for oversteer as you get on the power through the final exit kink. From there it's a straight run to the tunnel and the start/finish line.
There are a few things different about this round that you should take note of. The first is that we will be changing the formation lap procedure slightly. These changes are specific to this round. Details can be found in the tab below.

Both categories from the grid drive at 80MPH (128km/h). Cars are to maintain a 2 car length gap. After the Shiodome Hairpin, the LM cars are to slow down to their usual 62MPH (100km/h).
The GT cars are to slow down to their usual 50MPH (80km/h). Both categories go double-file after the hairpin, with the odds on the right. From there, the leader in each category can start accelerating anywhere between the start of the pit wall and the timing line, as shown on our track map image.
EDIT: The speed limit for the Safety Car procedure has also been increased to 80MPH (128km/h) for this race to hopefully keep tyres warmer for a restart. The rest of the safety car procedure details can be found on Post #2 -> "Race Day Procedures" -> "Incident/Safety Car Procedure".

Other notes. It's raining so be extra careful, especially when the LM's start lapping the GT's.

On the inside of the Shiodome Hairpin there are some movable barrels. Please avoid hitting these as they can show up in different places on different people's screens.

That should be everything. Pro Split today, Am Split in a weeks time. TSR_JoeToGuy to host the lobby. 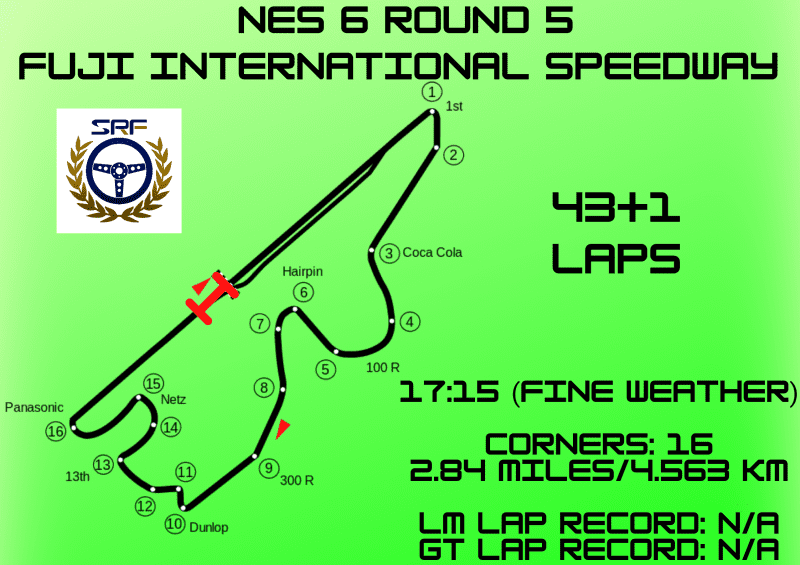 The 2nd half of NES Season 6 takes us to the Fuji International Speedway for Round 5.


Built in the early 1960’s, the Fuji International Speedway has been a staple of Japanese motorsport, hosting series such as Formula 1 and the World Endurance Championship. The track was originally planned to host NASCAR events, with a 30° banking that was never completed. Since then the circuit has gone through many different layout changes, with the NES using the Full/F layout for Season 6.

The lap starts on one of the longest straights in motorsport, measuring 0.917 Miles (1.475km). The road slightly kinks to the left as you enter the braking zone, and can be used as a decent reference marker. TGR corner is a tight right-hander that is very easy to understeer at as it goes downhill. There’s also some Astroturf to catch drivers out if you run too wide. The 2nd corner can be taken flat out on your run to the next section.

Sector 2 begins with the deceptively challenging Coca-Cola corner, a high-speed sharp left that requires a slight amount of braking to avoid running out of track limits. The exit kerb disappears quickly so you run the risk of a penalty if you don’t get back to within the white lines with 2 wheels. Due to the preceding corner, you are forced to be on the wrong side of the track for the entry of 100R. There are multiple ways to take this corner, either by taking a single late apex by staying more to the outside through the corner, or to set yourself in the middle and take it as a double-apex. Either way it’s crucial to gauge your throttle input correctly to not run wide. You may even wish to compromise your exit for a better entry into the tricky hairpin. You can really use the wide track width to make an overtake, and the corner on exit opens up encouraging carrying plenty of speed. The following couple of right kinks lead you down to the most technical part of the circuit.

Set yourself as far to the left as possible for the Dunlop chicane while avoiding clipping the grass. Make sure you don’t run too deep into the first part as it will severely compromise your angle for the second. Instead aim for a smooth and balanced line between both parts. Going uphill, you have to do the unnatural racing line of deliberately running wide in order to then make the apex as the corner tightens. This whole section requires carefully balancing your throttle, brake and steering inputs as you deliberately run wide again at Nets (More commonly known as Lexus Corner) to set yourself for a late apex. Run too wide at the corner entry however and you’re met with the Astroturf again on the outside. Panasonic is the final corner on the circuit, and is very similar to the previous one, but in the opposite direction. Run wide, but not too wide, and then aim for the late apex as the corner tightens. The Astroturf and runoff on corner exit is banked, making it even harder to avoid a spin if you understeer off. From there it’s a straight run to the start/finish line, with plenty of time to use slipstream to make an overtake going back into TGR corner.
Normal speed limits for the formation lap and safety car resume.

As you may already know, Round 5 is Livery Fortnight! We look forward to seeing what designs you've come up with this season!

Pro Split today in around 1 hour. Am Split next week.

Hope to see you there!
D

Come on, mate! If you get into Pro-Split would you like to drive for Toyota Gazoo Racing with me you can take the #6 car.
Desperate attempt to get a teammate

MrT17
Come on, mate! If you get into Pro-Split would you like to drive for Toyota Gazoo Racing with me you can take the #6 car.
Desperate attempt to get a teammate
Click to expand...

We have decided to push back the date for Pro Split Round 8 of NES Season 6. This is for various reasons, including the La Sarthe specific BoP modifications. The Am Split race will stay on the same date.

Also keep in mind that these dates will be using the GMT/UTC timezone instead of the BST timezone.