Foxiol
From behind too...It also says in the Autodesk title at the end "for event"...maybe for TGS 2012. Probably they are going to announce an update or a new and last DLC. 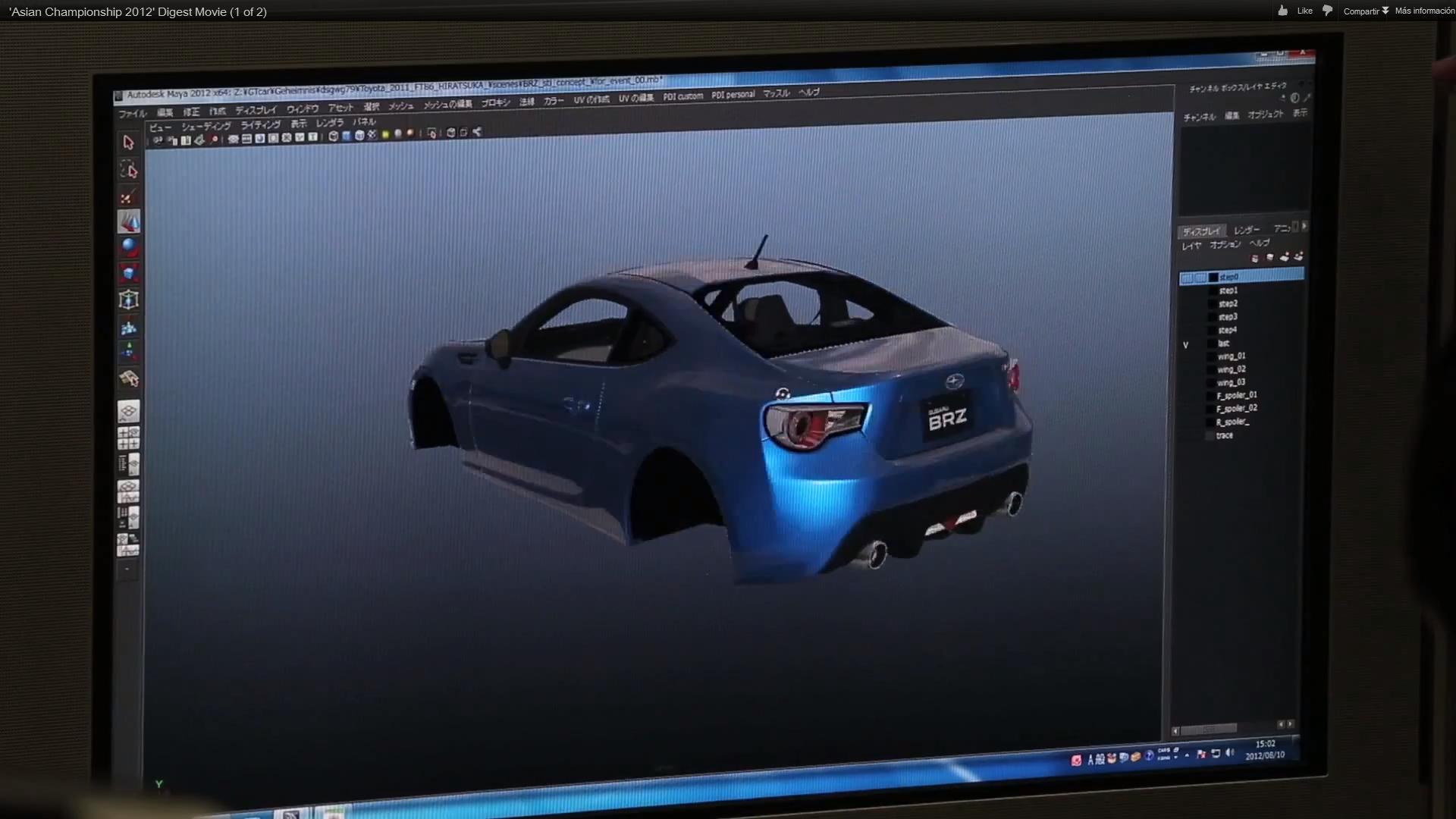 kogunenjou
Hang on, hang on. This is a regular BRZ, yet the object URL is BRZ_sti_concept.

Observe the list on the right of the picture (which I quoted for ease of reference, apologies), that shows:

Note that "last" (or whatever it actually says) is the only one with 'V' to its left, so it's the only layer currently visible.

Anyway, what's interesting is that the model presumably contains the visual mods as separate layers, namely the wings and such, but if "last" is just the stock shell (and interior?), what are the "step" entries all about? And "trace"?
As such, it's easy to assume that the STi version is achieved simply as a modified version of the base car (which we all suspected would be the case), and that this is either early in its production, so it still looks like the base car, or the STi-ification is hidden in the other layers.

Exactly i was thinking the same thing. We are seeing a part of the entire model. The basic one.

But also i would think that there is still an update incoming with maybe the BRZ Concept STi car (no cockpit as the Toyota GT86 Concept) for free and other DLC.

And again probably this will come with the release of the Gran Turismo 5 Academy Edition. (Sony sent me one of those mails announcing it this past Friday)
From a marketing point of view to sell some more they can add a DLC with some wanted cars. People who doesn't have the game in that case. And us who want that car.

Imagine an update with the Concept car for free and the BRZ alone with some more cars. A premium Veyron perhaps?

Well that is all in my head and of course more speculation...blame me for studying marketing...lol

Still too late in the life cycle of the game to "dream" about more content. More probably a GT6 car. But with PD who knows. TGS coming too to announce some more stuff.

Makes sense the asian finalists gathered at PD HQ that day and then went to the Nissan HQ the next day... if you watch the video you see the date, Aug. 11th 2012 the were at Nissan hq.
Click to expand...

Whoops. I was too caught up in the BRZ thing to notice why they showed it in the first place, to reward the Asian finalists. Thanks for clearing that up man

Kino321-X
Whoops. I was too caught up in the BRZ thing to notice why they showed it in the first place, to reward the Asian finalists. Thanks for clearing that up man

It is apparent that all we need is a glimmer of hope to get us excited, and as usual, it happens indirectly from PD. Personally, I'm going to withhold my enthusiasm. Nice to see some excitement though.

Nice find can't wait to use this on GT6 when it comes out.

Look at the back...those rear lights.

Ridiculous, yet the same car? put some nice European car!

jahhaj
it's a different car it's got different styling, different suspension setup and so on.
Click to expand...

The same will happen like the other versions. Even though the GT86 & the FRS were 100% FREE, and i'm sure the BRZ will be too. People will complain about it.

Make all the grinding faces in the world.

What if the STi mods are an RM for the regular BRZ? 💡

What if the STi mods are an RM for the regular BRZ? 💡
Click to expand...

If they're going to make the effort of modeling the BRZ STi's body for an RM, I'd rather have it as the road car. Of course it couldn't hurt to have it as RM only.

That's just one of my names.

Another duplicate, another dollar.

Yet it's also different in its own way (if you take the time to see it) and it'll most likely be free like its brothers.

JAHHAJ
It's a different car it's got different styling, different suspension setup and so on.
Click to expand...

Assuming this comes to GT5 I am virtually certain I will never drive it. I have once used the Scion FR-S for Photo Travel. The BRZ is as close to the GT86 as makes no difference. Im excited to see what PD still have planned for GT5 but the Subaru BRZ, unless it can receive RM, is useless to me.

We should have received all 3 at the same time with there respective differences. It should be free. It's not worth getting excited about,unless we get the STI concept version.

My humble opinion, the BRZ is to the GT86/FRS as the 3000GT/GTO is to Stealth or Eclipse is to Laser/Talon or Vibe is to Matrix and so on.

The same but different.

The BRZ is the car I wanted, because I like Subaru and to me the BRZ is the best looking of the 3 cars. Hopefully there will be an RM too.
R

Give it the correct sound at least... the FR-S doesn't sound right in the game... heard one in Real Life. Hope the BR-Z has subaru's signature boxer sound like you find in an impreza. getting sick of wimpy numbers and shop vac engine sounds.

Add the US version of the new Civic Si with the next DLC if we get one... Forza had that before we got our race car pack... I know... junky car, but hey Forza's got it, why not Us?

It's the same engine and exhaust as the FR-S and GT86, so it will sound the same as those.
I'm sure unequal length manifolds will start showing up sooner or later, although it will affect the performance. It'd be nice to be given the option in GT6, though.

I think im more surprised to see that they use Maya to model their cars lol.If only somebody pressed 7 so we could see how many polys it has haha.

I'll take it and thank you guys in advance PD.

I've noticed a startling contrast in reactions between the announcement of the Scion FR-S in GT5 and the Subaru BRZ.
C

I would've preferred this over the Scion Freeez.

And it's been said many times and I'll say it again:

It's a fact that the suspension tuning is different enough to affect driving characteristics. They could also have made the BReeeZ a LHD model like the one in Motor Trend's recent BDC to further differentiate it from the RHD FT-86.

If PD knows what Subaru is planning (turbo? 4WD?) this could be a good base too.