Rivian is the only electric I would consider buying. 0 to 60 times, and top speeds no longer get me excited, my lowly GTO can get me into plenty of trouble very quickly if I wanted, and it's a slug by modern metrics. I just want something well built, reliable, fun and able to hold its own in traffic. So far Rivian looks to be checking most of those boxes.

I'm excited for this. I have no idea what their pre-order situation is like but I have a feeling this truck will sell like wildfire.

I've been interested in how this truck would do since they first started talking about it a few years ago. I've always dug the look, glad its not vaporware. Not like I'll ever be affording one, but hey. 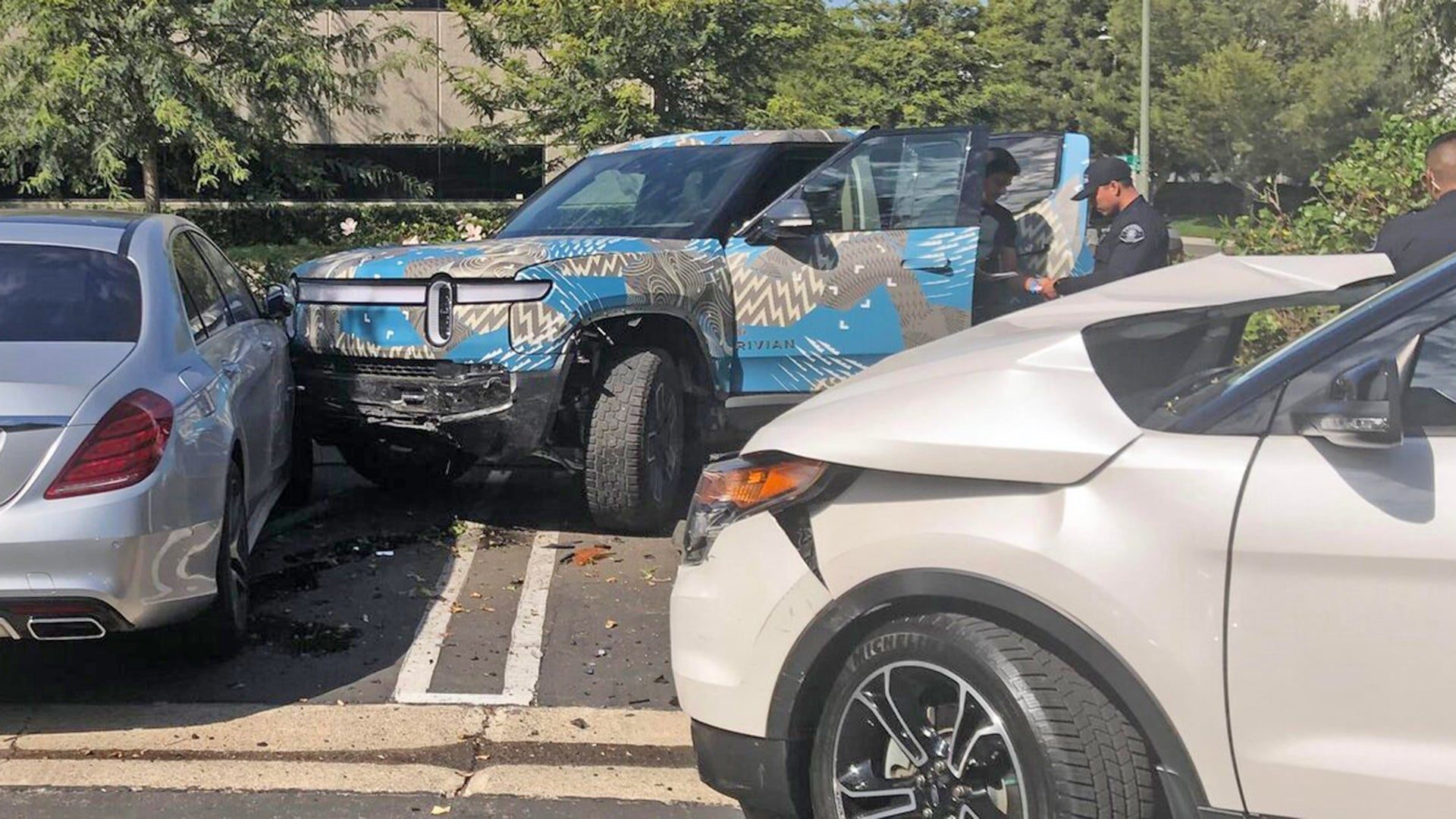 A prototype Rivian R1T left the road and struck two parked cars in California on Wednesday in what appears to be the electric truck's first public crash. 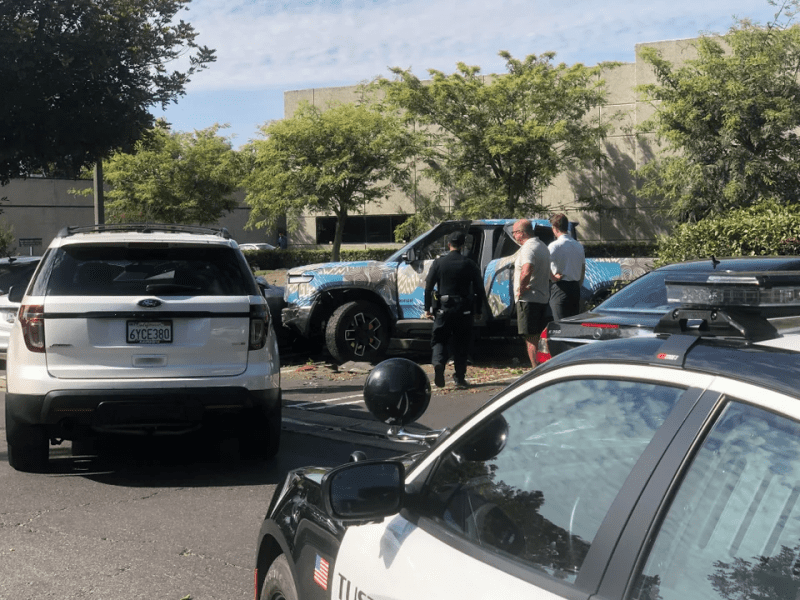 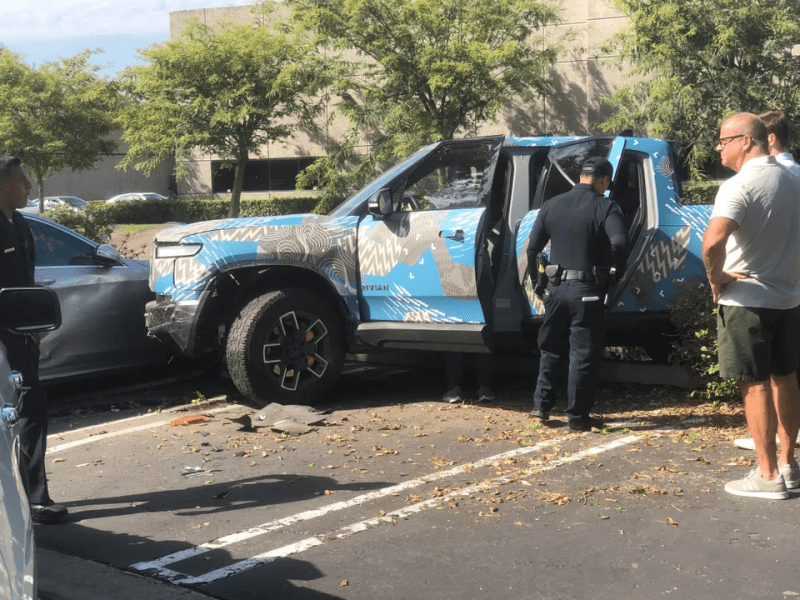 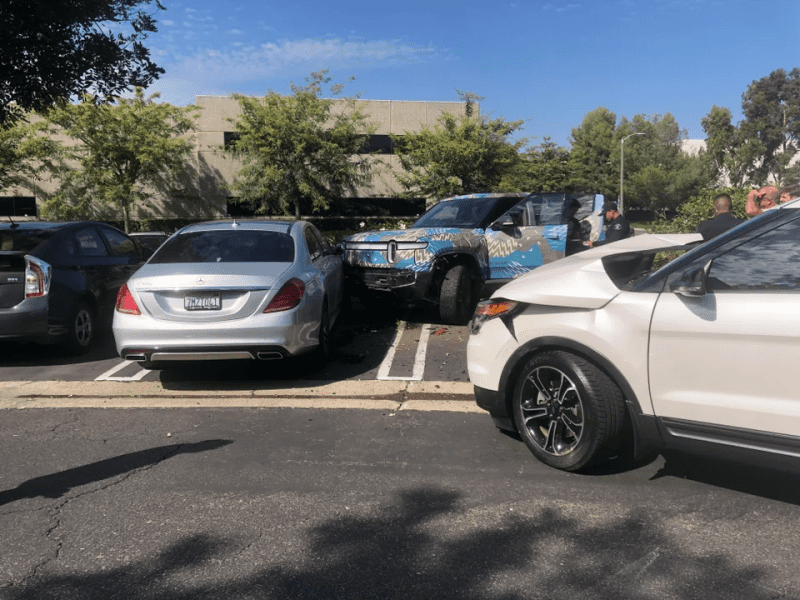 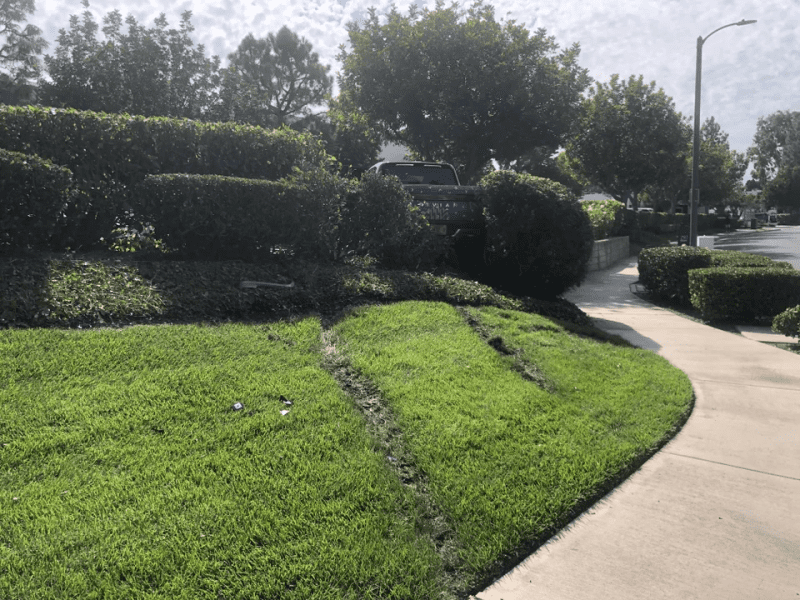 This is what the OP said

Disclaimer: I’m a big fan of Rivian and the vehicles they are producing and have been following them since I first saw them at the LA auto show in 2018.

I work right next to Rivian’s west coast office and see RJ, the trucks, and the Amazon delivery vans all the time. I think they’re awesome but just wanted to post this for other enthusiasts out there to take a look.

Not sure if it was throttle malfunction, failure of the brakes, or the guys driving it were just having too much fun on the straight away and braked too late. Cops were everywhere trying to disperse people so I didn’t have much luck asking any of the engineers who were driving.

This just happened about 30 mins ago.

Edit: brake, not break. But I guess both apply to this situation.
Click to expand...

From The Drive article

Unfortunately, yesterday in California another R1T still clad in testing camo drove up an embankment and into a parked Ford Explorer (to much less fanfare) in what appears to be the first crash of a Rivian on public roads. At such an important moment in the company's history, a public crack-up like this has attracted a lot of attention and no small amount of speculation. In a statement to The Drive, Rivian confirmed the incident involving a prototype R1T, claiming the crash was the result of driver error, the driver (a company employee) is unharmed and that all safety systems "worked as intended."

Still, there's a lot to unpack. The crash took place near Rivian's offices in a business park outside Irvine, California (here's a link to the map). Based on photos from the scene and the trajectory of the truck, it appears the prototype R1T was headed south on Myford Road—a long, four-lane straight—when it failed to navigate a 90-degree turn at the end of the street and plowed wide into an adjacent parking lot, punting that poor Explorer out of its parking space and making contact with a Mercedes S-Class. Whether "driver error" means excessive speed, inattention or something else, we can't say. Obviously, a crash caused by a mechanical issue could have significant implications as the company rolls out the production R1T. While we can't verify Rivian's claim, the circumstances do point to human error.
Click to expand...

Okay, so,... I could buy one of these, do some off-road mountain climbing, go to a drag strip and beat some muscle cars, go to a circuit and do a track day, by changing the tyres and lowering the "air" suspension and go to work the next day, using the same truck?

He mentions 34 inch tires...what size are these things? A 33 for my Toyota is 285/70-17 which is pretty big. In my opinion the Rivian's wheels are at least an inch too big to have enough sidewall for hardcore off-roading so I wonder if they can fit smaller wheels. 18s would be perfect, and with 35 inch tires it would be impressively capable. Like, Sasquatch-capable. 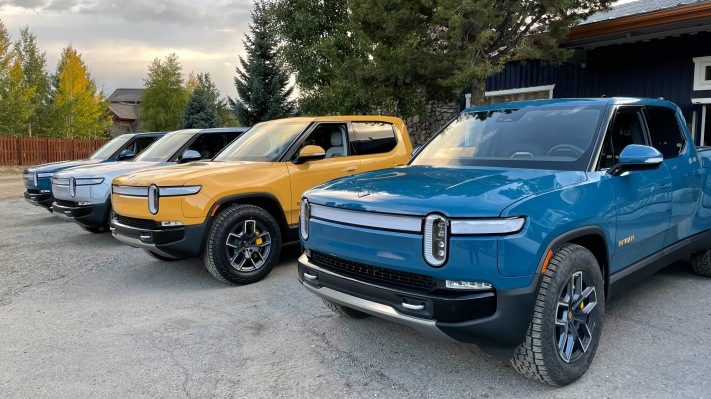 Electric vehicle startup Rivian, which started deliveries of its R1T pickup truck in September, released its filing to become a publicly traded company in the United States. The S-1 document, which was filed Friday with the U.S. Securities and Exchange Commission, does not include terms for its off…

The S-1 document provides a first look at Rivian’s financial data and other insights into the company as well as the risks and opportunities it faces.

Rivian reported a net loss of $426 million in 2019. Those losses more than doubled to $1 billion as the company built out its factory in Normal, Illinois, prepared to begin producing its R1T pickup truck and R1S SUV and expanded its workforce. The company now employs more than 8,000 people across several facilities in California, Michigan, Illinois and the UK.

The numbers have steepened since then. Rivian posted a net loss of $994 million in the first half of 2021 alone, far more than double its $377 million net loss the company posted in the same period of 2020.

Rivian also disclosed its long-tern business strategies, its plan to first sell its EVs and the United States and Canada and then soon expand to Western Europe. Sales in Asia will follow. Rivian said in its S-1 that it will build local facilities to support growth into those new markets.

Rivian also disclosed it had 48,390 preorders for its R1T pickup trucks and R1S SUVs in the United States and Canada as of September. Pre-orders, which requires a refundable $1,000 deposit, don’t always convert to sales. However, they can provide an indication of demand for the product.
Click to expand...

I'm gonna look at the trends for that IPO in the first few days and see what happens. The company is going places for sure. Lucid is the only reason my "portfolio" is positive right now. In the future I plan to invest in all these American startup EV brands, screw the legacies.

Also, that little tidbit you quoted seems to ignore the fact that Rivian has an Amazon contract to produce delivery vans, 100,000 of them by 2030. Rivian is going big places, I guarantee it.
Last edited: Oct 2, 2021

Keef
Also, that little tidbit you quoted seems to ignore the fact that Rivian has an Amazon contract to produce delivery vans, 100,000 of them by 2030. Rivian is going big places, I guarantee it.
Click to expand...

Oh yeah definitely. It is interesting the article mostly ignored Amazon while covering their losses. 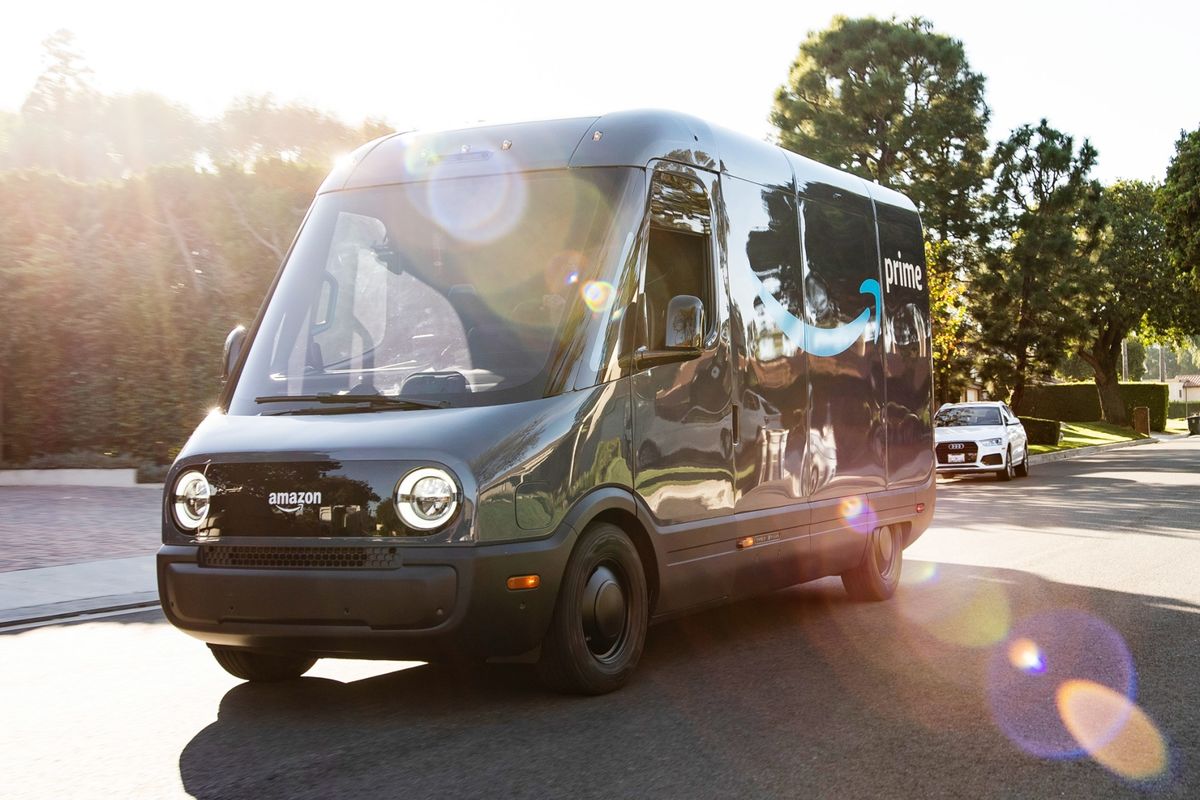 Rivian’s Electric Truck Gets All the Attention, But Its Fate Is Tied to Amazon

For founder R.J. Scaringe, a 2019 endorsement from Jeff Bezos opened doors that even Elon Musk couldn’t in the early days of Tesla.

There’s a clear recognition inside Rivian and with its investors that the van for Amazon is a priority and the pickup a sideshow until production can be ramped up to meaningful volumes. The deal gives Rivian visibility and guaranteed revenue, along with a deadline. An all-hands-on-deck edict has been issued to get the project up to speed — for now, the R1T is taking a back seat.

Rivian’s most immediate goal is to deliver 300 vans to Amazon by year-end, according to people familiar with the deal. The first 10,000 units are due by the end of 2022. The full order of 100,000 vans is due by the end of the decade. The vans, in different configurations, are principally for last-mile delivery. Each will have a range of up to 150 miles on a charge.

Over the summer, Scaringe fast-tracked testing on the R1T pickup to clear the decks for accelerated van production in the fall. In September, the company’s efforts refocused on building what is known internally as the Rivian Prime Van. The pickup is being produced in steady but modest numbers, according to people familiar with the plan.

The pickup has also faced multiple delays since the global coronavirus pandemic hit, most recently attributed to a global computer chip shortage. Rivian has promised each buyer a human point of contact, dubbed an “ambassador,” to set expectations before the vehicle is delivered. But to date that PR army has had little positive news to report.

The deal between the two companies is stacked in Amazon’s favor. Rivian's Oct. 1 filing details that Amazon’s logistics unit is not bound to buy any electric delivery vehicles from Rivian — and that it can still work with any other potential automotive partners it chooses.

Quantifying how much of a boost the Amazon deal will be to Rivian is tricky, as the specifics have never been disclosed. The unknown price of each van is just one part of the equation. The agreement between the two companies also includes provisions for recurring revenue for fleet management, such as software updates and running diagnostics, people familiar with the matter said.
Click to expand...

Mmm, look at the subtle chamfers around the light and grille edges on the R1T. Mmm, good design. Even the van has larger, simpler chamfers but it still has them. That said, it does involve more complex manufacturing so you'd expect it less on a delivery van than on a Mercedes EQS premium vehicle. 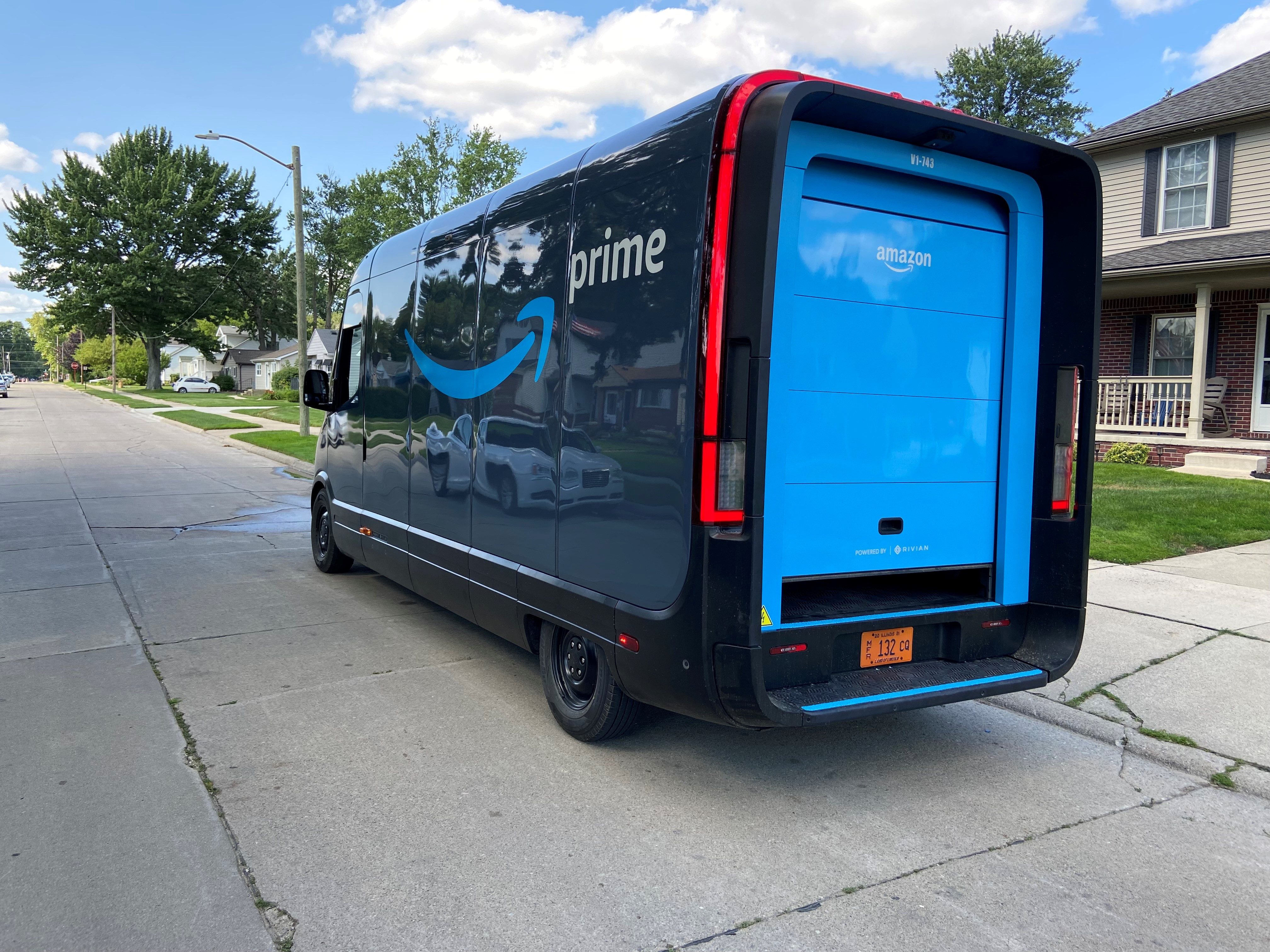 Edit: Apparently the headlights on the Van are also inset, but like the Defender you can't tell because the whole fascia is glossy.
Last edited: Oct 8, 2021

Fisker Is Back From the Dead With the Electric EMotion

Pagani Looking to Venture Into the World of Electric Vehicles
2