What did you do in GT7 today?

First tried Red Bull Ring and... the other one...

I then bought the 'Lil Bastard from the LCD

Waiting for Sophy AI to be added

Got a nice sport muffler from the wheel. I don't even care what car it's for.

(Done yesterday; I forgot to come back to hit "post")

On the GTP account, I laughed my way through a soaked 6-lap Sarthe race in the Cayman Clubsport. The resulting 6-star marathon roulette gave the lowest-possible 500,000 Cr.

On the Plus account, I needed a cunning plan to make the 458 Italia Gr.4 work on a bone-dry run. I ran the first 4-lap stint on FM 3, then pitted for a full load of fuel and a fresh set of tires. The second stint on FM 1 was good enough to eke out a win.

The insulting 3-star Wheel of Despair didn't even give credits, though it did give something just a little more useless - a racing muffler for the Charger safety car.
Last edited: Nov 18, 2022

Finally Golded all of Human Comedy with a first try at Trial Mountain. Collected the Fairlady and DB5, as well as 100k from a 3-Star

Nothing waiting for Nations and Manufacturers😡😡😡😡

Leaves me with a few in The Human Comedy to do to complete all the missions.

Got a Stage 5 Weight Reduction for a Bugatti Veyron from my 4 star daily roulette ticket.

Currently making a project car off a swapped 3.0 CSL '73, tweaking the suspension and diff to counter the phenomenal oversteer on throttle in turn exits.
Also managed to buy the 550 off the LCD, made some cool time trial laps on Goodwood. This car is fantastic.
For the roulette reward, I've got a GR86 on a 3 star ticket.

Ran a 10-lap custom race at Spa with the Group C cars. Finished the circuit experience there, too.

On the Plus account, I used the Jaguar F-type Gr.3 at Sardegna. The 6-star engine workout roulette gave another 787B engine. Do I dump it in the last RX-7 or the RX-8 (I already have 2 RX-8s)?

First time I've played in about a month, and maybe the game is trying to tell me something... 1 million Cr. on a 4-star ticket, which means I don't need to do any more races to afford the final car to complete my 1999 JGTC Suzuka grid...

All that's left now is:

Eggstor
On the Plus account, I used the Jaguar F-type Gr.3 at Sardegna. The 6-star engine workout roulette gave another 787B engine. Do I dump it in the last RX-7 or the RX-8 (I already have 2 RX-8s)?

Using my 787B, I also ran a Custom Race at Alsace. A 10-lapper with the Group C cars. Good fun. Then completed the Circuit Experience there, too.

Got shafted by the wheel. Some HP camshafts.

On the GTP account, I recalibrated the Radical to get it back under 600 PP, then blitzed Tokyo, despite running out of fuel just before the finish. The all-cash 4-star Wheel of Despair gave the lowest-possible/low-showing 10,000 Cr.

On the Plus account, I dithered until settling on the AMG GT S for the Tokyo run. The 3-star Wheel of Despair gave the lowest-possible 5,000 Cr.

Did my usual and played LeMans and did one race... got the W and finally broke the 20 million mark... I like to have extra cash for future DLC and tuning...

I did two 30 min runs of my 1999 JGTC Suzuka recreation, and both were great races, albeit for different reasons.

Run 1 was on Intermediate difficulty in heavy rain - unfortunately, however, I forgot to detune the McLaren F1 GTR and so it was much quicker than everything else (790 PP instead of 660 PP). However, the game's massive rubber-banding (even though all 'boost' options were switched off) ensured that I was still able to win, not least because the lead AI (McLaren) pitted for no apparent reason at the start of the final lap. It was, however, a tight finish as the lead AI came out of the pits about 12 s behind me, and was catching me hand-over-fist. I wasn't helped by the fact that I'd changed the timing to evening, and ended up doing the last 3 laps in pitch darkness, scoring 1.5 s-worth of penalties but somehow managing to win by 0.7s.

Run 2 was on Professional difficulty in heavy rain - this time I was in the McLaren F1 GTR (first time driving it!) detuned to 660 PP in line with the rest of the 19-car grid. This time, it was just a pure driving battle against the AI. I had caught the leader - the Castrol NSX GT500 - by the start of lap 9, but only passed him for the lead in the S Curves on the final lap (lap 12). It was a clean pass and a really entertaining battle, and I held on to win by just 0.8s. 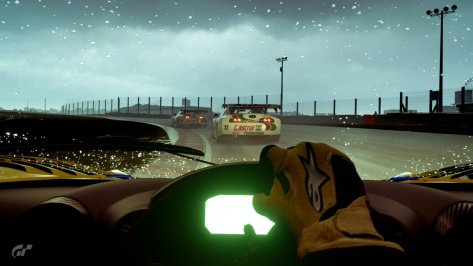 Chasing down the #36 and #37 Castrol TOM's Supras at Suzuka in a McLaren F1 GTR
​
As I've mentioned before, Custom Races offer so much potential but there's still some notable problems, not least that it's very difficult to engineer a race where fuel and tyres are used evenly across a grid with multiple different models of car. The rubber-banding does create fun races but at the expense of being blatantly applied at times - as was the case in Run 1, there should have been no chance of me winning, and yet thanks to rubber-banding and nonsensical pit strategies, I was able to beat a car that posted a lap time some 8 seconds quicker than my fastest...

But, the realism of these Custom Races is, for me, the absolute best experience of GT. And driving that McLaren F1 GTR is an absolute blast!!
Last edited: Nov 20, 2022

@Touring Mars I've seen the entirety of the AI (not just the rabbits) "mess up" fuel strategy in a myriad of ways, from simply not putting enough in on what should have been the last stop to being hounded (by both me and the other AI drivers) into burning more fuel than planned, from merely thinking it doesn't have enough fuel to make the last lap to actually running out of fuel. It happens more often in GT7 than in real racing, but I do like that the AI isn't perfect.

Finally got gold on all the licenses. I don't think I could have been any closer on S10 but hey it counts.

Fixed my Logitech G923 rattle and raced all day in silence lol it was awesome.

The wheel gave a new Supra.

Any tips or current tunes for those 2 missions would be a huge help.
A

Did a few daily b's in the old BMW gt3 z4. Great car and got a couple of podiums for the trouble. Got an engine ticket that gave me the ford race car engine. Did not have this one yet, so i put it in a fiesta, then with a bit of tuning i did Sarthe with it. Easy 4 laps on fm6, but really bad on tires. Easy win and back to 20 mil credits

On the GTP account, I got an easy win at Sardegna with the older R8 LMS despite two crashes (one self-inflicted, the other being punted by a backmarker as I tried to lap him). The all-cash 5-star Wheel of Despair gave the middle-fin...er...showing/lowest-possible 100,000 Cr.

On the Plus account, it was a very close win in the FT-1 Gr.3 as Beauvois was unusually quick. It required a last-corner pass as I couldn't outmuscle him coming out of the last left-hander, but I managed a 0.9-second win in 27:07.5. The 4-star Wheel of Despair gave a second Stroke Up S for the DeLorean.