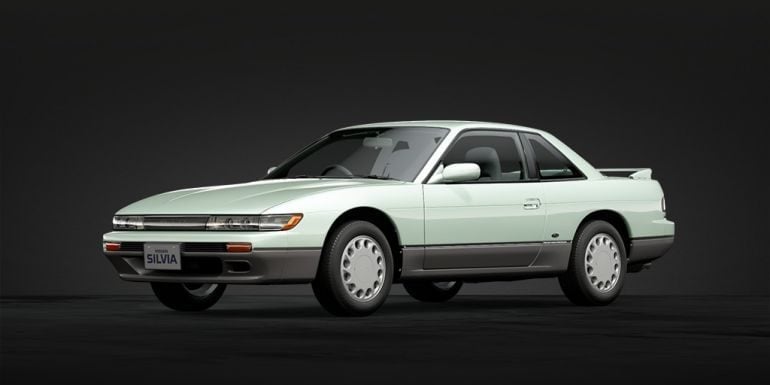 Thankfully, though, mine's black and not that God-awful color in the pic.

So... Mission Challenge 8-8... the LAST one... absolutely no idea how to do it, so I went in total improvisation.

No idea of how much fuel I'll get at the start, how much the tyres would wear and which car to pick in my numerous Gr.3 cars.

I took my Huracan GR3.

First lap correct, finished at 12s from the 1st, had to pit because I had only enough to one+ lap of fuel, took RS and enough fuel for the remaining laps.

Lap 2 correct, few big mistakes, I ended up 3rd a few seconds behind n°1, 1 and 2 pitted, I continued. A guy exited the pits and became 1st, but I passed him. Alas I bottled the first corner... and he passed me (not used to that configuration of the track).

During the lap 3 I made big mistakes, lots of 180, ending up in the wrong direction, and watching cars passing me 😤 plus my tyre wear was awful and the end of the lap was very slippy.

Finished like 8th and pitted to get fresh tyres.

Not sure what the good strategy is, maybe pit each lap, change tyres to RS and take 1+ lap of fuel.
My max speed was limited to 262km/h, I think that with a better max speed I would have been able to scrape some seconds. Some cars even passed me on that straight.

But my main issue was some big bottles. Better go slower and not butcher some corners, in the end the lap time is much better (and watch the tyre wear more closely to, does not help when the rear wheels constantly want to go in front).

To the rewards now !

For getting silver on all Mission Challenge, i've received a Dodge Viper GTS 2013 - 123k Cr.

And for the DWG, please take a seat and enjoy the content of the wheel :

Of course I got the dupe and least valuable car of the wheel...


Video of ending credits and rewards :

Only including cars obtainable through daily roulette (323/338 cars in the game)
Current overall completion: 277/323 (85.8%)
Sorted by Manufacturer.
Cars in red are missing.

This time I go calmly even if it means being too slow on some parts of the track, better slow on the aslphalt than lawnmowing !

First lap neat, ended 2nd just behind number one, passed him calmly at the half of second lap and stayed in front. Small 180 still, and my advance of 8s became 1s when we entered the last straight.

As I've had modified my gearing, I was able to reach 300km/h, which gave me a few seconds more by the time we reached the end of the 2nd lap.

Pitted and changed my tyres that were okayish but needed reinforced vigilance.
Had an issue when fueling, when I wanted to stop with 2+ laps of fuel, the stop button did not work, apparently the arrow wandered during the refueling and when I hit the button it did nothing, first time I have this issue, and not the good time !

Lost 2-3s to understand what was happening and exited the pits in 6th. Passed most of them before the end of the speed track and only the number one in front of me. I used him as a guide and passed him when I felt comfortable doing so. On some parts he was gaining ground but overall I was able to keep up.

After that, as it was the last laps, my objective was to be fluid and cautious. I was watching the time but he was loosing ground gradually so I did not push more, even been really slow in the corners I use to bottle.

Which means two rewards, a car, and the bronze trophy "Rival Crusher" 😎

As a reward for golding MC, I received this car :

Of course I got the Subaru... at least it is not a dupe 😏

I wonder what I will do next. Could be the right moment to try to get gold at circuit experience on the Nordschleife, as I've been practicing the track those days... And I'll have to gold Le Mans also. Two more cars and a trophy at reach maybe ?

I also have to finish the VGT+ Trophy, but there is no big challenge there. At least it is a training for very fast cars.

Don't have the Lewis Hamilton DLC. Not sure I will take it. 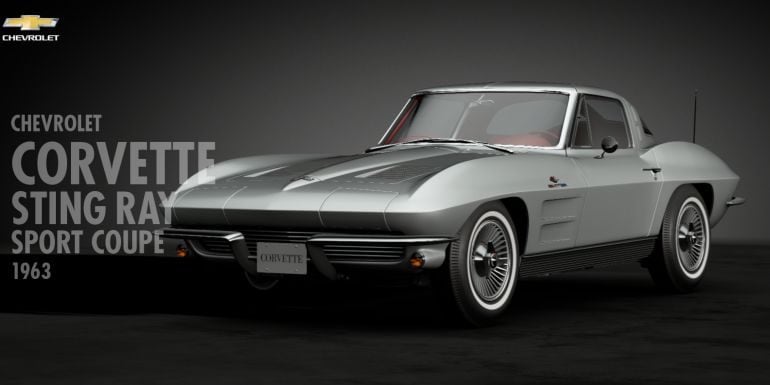 Of course, it was the only non-race car on the wheel. At least it wasn't a dupe.

And I've also been watching closely how the wheel does. And I've noticed that at the point where it slows down, that's the car that it gives you. I can't this is 100% certain, but just something I've noticed.
Last edited: Sep 15, 2021

Only including cars obtainable through daily roulette (323/338 cars in the game)
Current overall completion: 277/323 (85.8%)
Sorted by Manufacturer.
Cars in red are missing.

[Edit]Done VGT Trophy+ Sardegna, easy win again, and got my mileage for DWG.

No need to tell you which one I received... not a dupe, there at least that.

And as pointed out in my previous post, this was the point at which the selector slowed down.

Wohoo! Another new one after just five duplicates! 🥳 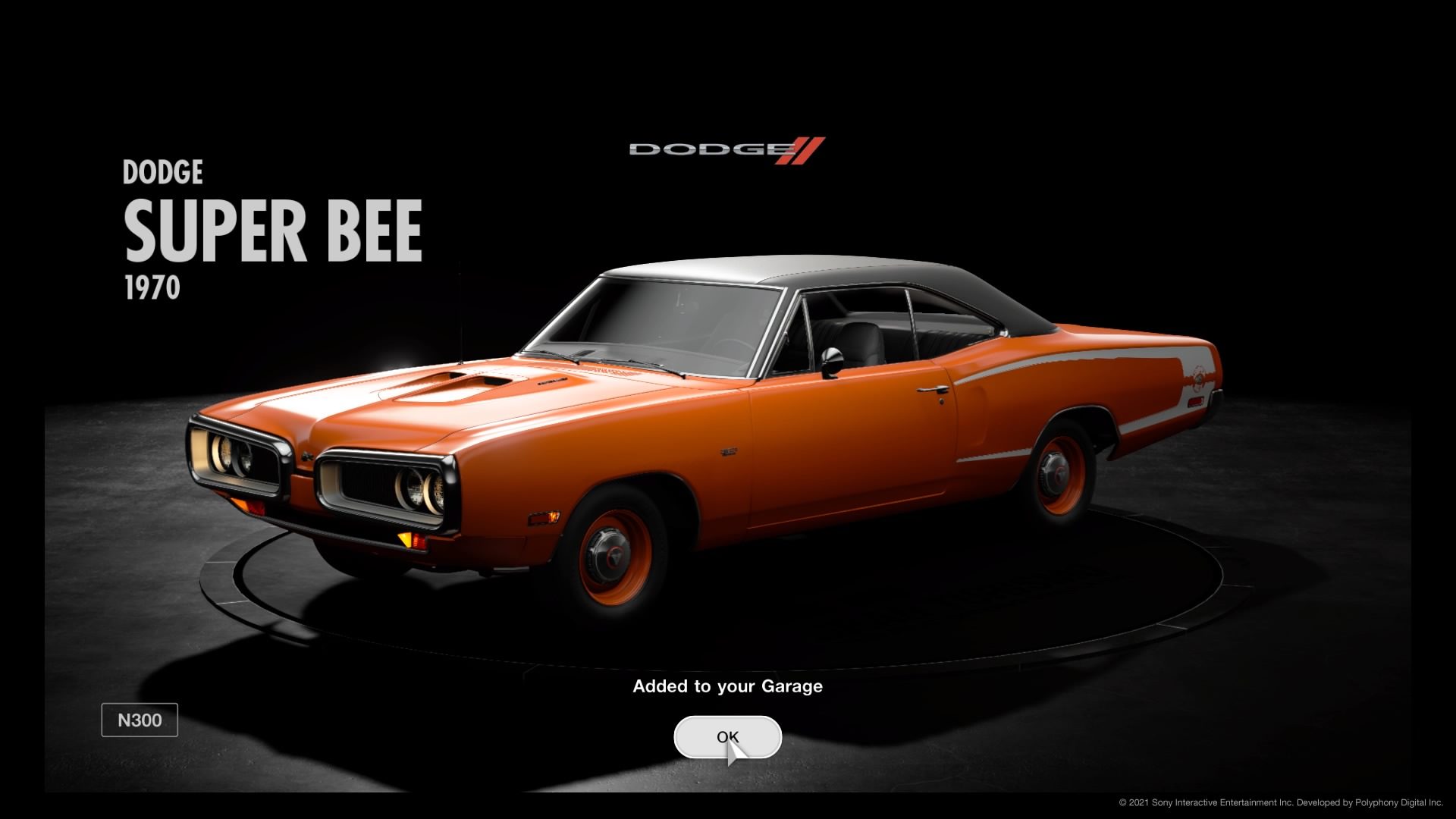 BloodRaven
And as pointed out in my previous post, this was the point at which the selector slowed down.
Click to expand...

If you look at that wheel :
I see the rythm is quite rapid for 15 steps, then it slows frankly on the Civic and does 5 steps more to end up on the Silvia

15 fast, slows a lot more than the other wheels before and stops at 19

The 15 fast steps looks like the norm (from my rather small sample), but after that, it varies between 4 and 8 more steps, with various sppeds, the rotation speed being slower when it does few more steps than the 5 it tends to do.

And with that variation in the number of slow steps, it does not begin to slow on the car you will get in the end, it can do a from a full lap more up to 2 laps more, with all the possibilities in between.

I'll continue observing my wheels to see if I get other observations.
Last edited: Sep 17, 2021

19 days after receiving a new daily workout gift, I received another one, a first for this month. It's a 2015 Lamborghini Aventador LP 750-4 Supeveloce.

Tonight I pursued the VGT Trophy +, with Interlagos (easy win with a lap in advance) and full Nurburgring (easy victory but some bottles).

Tonight on the wheel, none other than the incredible :

And would you guess ? I received the less valuable car of it of course. Oups not this time 😅 another Hyundaï Genesis Gr.3

The GT LM Spec II Test Car was also on the wheel, lol. Wish I would've gotten that one; it wouldn't have been a dupe.

Last track of VGT Trophy + on the track Kyoto Driving Park - Yamagiwa + Miyabi. I don't know it well, but no problem with the tomahawk, the other cars are only random obstacles.

It was enough for a DWG (and for my energy tonight).

For the rythm, another 15-20, seems like the most frequent sequence. 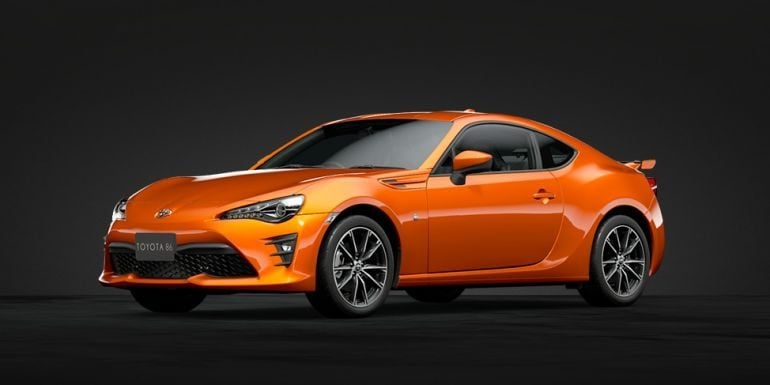 Not crazy but at least not a dupe.

I wish it would've been the other M6; I don't have that one.

After a good afternoon on the water, not much energy left for GTS, so... I began the GT League Pro Group 1 cup 😅 with an easy track : Tokyo Expressway - East Outer Loop: 8 laps

I used the Porsche 919 which I enjoyed on Mission Challenge 8-7.

Very cool to drive on this track and I rather rapidly climbed to the 3rd place. But there I struggled a bit to pass the 2nd, and managed to pass the 1st in lap 7 (with one more lap to go). Did not bottled too much and kept an advance margin around 1-2s that was just enough to win. One or 2 mistakes and I would have been 2nd or 3rd.

I really like the handling of that 919, excellent in fast corners, rarely used the brakes so little on this track.

Afterwards, I found that there was a bit of improvement available on the weight (just one step, and nothing for power), it will be easier on next track for this car.

And I got this nice not dupe :

There was a Ferrari 330 P4 on the wheel. It actually would've made me mad if I'd have won that (now). Seeing as how I worked a lot to get to 20m Cr just so I could buy one for the Nostalgic Series.

Really not much exciting about any of these, if I'm honest.

D
Should I reset to fix Daily Workout Bug?