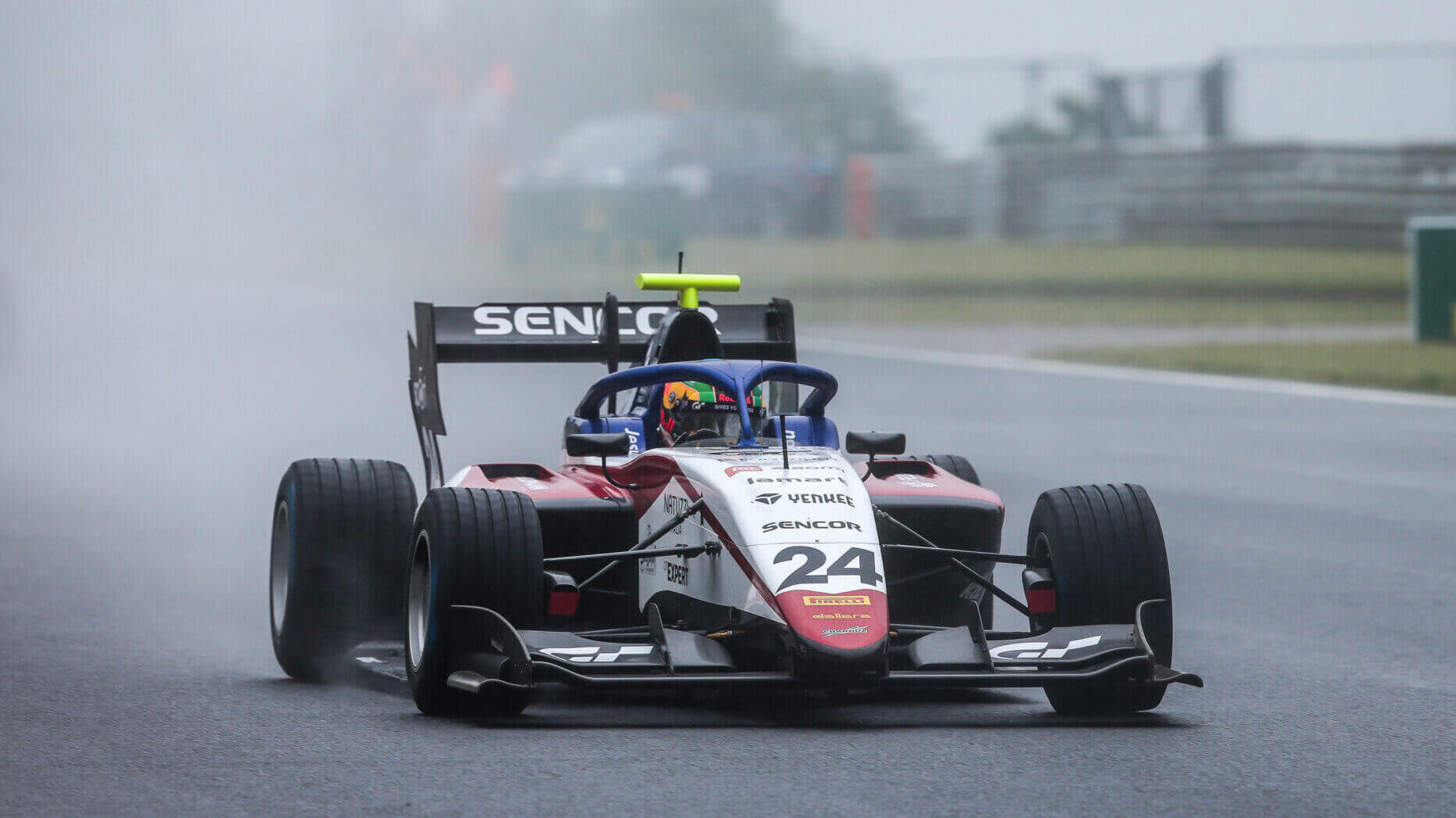 A third-lap incident in the FIA Formula 3 race at the Hungaroring robbed GT Sport world champion Igor Fraga of his first chance to score points this season.

After two weekends in Austria dominated by reliability issues with his Charouz, Fraga was looking forward to a trouble-free weekend. A cautious start in Hungary didn’t see the Brazilian troubling the top of the order though, and the mixed conditions qualifying — rescheduled due to the deluge — saw Fraga start the feature race in 18th.

That proved to be a mixed blessing, as a dramatic turn one incident unfolded. Logan Sargeant, who had been second on the grid, got sideways under braking and hit the front of Alex Smolyar’s ART with his own rear wheel. The bunching up of cars caused a second incident involved four others, and while Fraga stayed out of the worst of it he did come to an almost complete stop with the right half of the circuit blocked by cars.

With the Hungaroring notoriously not conducive to overtaking, Fraga was able to make up three places by the end of the race — one from former Toyota Racing Series team-mate Liam Lawson’s engine erupting in flames on lap five, bringing out the red flag — to finish 15th. That was, again, the best finish by a Charouz car.

The heavens opened again ahead of the sprint race, but the Brazilian driver made the most of the conditions early on. With the rain shaking up the established order, Fraga was quickly up from 15th and into the top ten. However, while battling for ninth with the MP Motorsport car of Bent Viscaal the two came into contact.

This pitched Fraga into a spin and damaged his front suspension, retiring the car. The race stewards gave Viscaal a five-second penalty for the incident, one of two the Dutchman picked up during the sprint race.

“In Race 1, on slicks in the damp conditions I was able to gain some positions but here in the Hungaroring it is so hard to pass that I could not make up all the places I think we should have been able to.

“In the rain conditions I felt that there were more possibilities and I was really going for it but then on the exit of the corner the guy ran wide and touched me, I got front suspension damage and it was over for me.

“That was a real shame because we had good pace, coming from 15th to 9th, I was catching up very quickly the guys ahead and then that happened, very unfortunate for me.”

Formula 3 gets a weekend off now, before heading to Silverstone for the next round on July 31.

Andrew Evans · Jul 19, 2020· Comments
For the fourth event in a row, a team of sim racers has beaten professional racing drivers at the showpiece Race of Champions (ROC) — this time going one step further and winning an entire knockout match against the pros.

Andrew Evans · Jul 19, 2020· Comments
Formula One has confirmed that 2023 World Championship will run over a record 23 events, with racing to resume on the weekend of March 5.

Andrew Evans · Jul 19, 2020· Comments
The most famous 24-hour race in the world is back, for its 90th running, just 10 months on from its last event as it returns to its normal spot on the calendar.

Andrew Evans · Jul 19, 2020· Comments
Netflix has confirmed that Drive to Survive, its fly-on-the-wall docu-drama series following the world of Formula One behind the scenes, will return to the streaming service on March 11.

Andrew Evans · Jul 19, 2020· Comments
Venture capital concern ROKiT has teamed up with Sector3 Studios, developer of the RaceRoom Racing Experience sim, to create a new esports competition for teenagers with a very special prize: a season-long contract to race in Formula 4.

Andrew Evans · Jul 19, 2020· Comments
Newly crowned Formula One World Champion Max Verstappen has spoken of his love for sim racing during an interview with ex-F1 driver David Coulthard for CarNext.com.