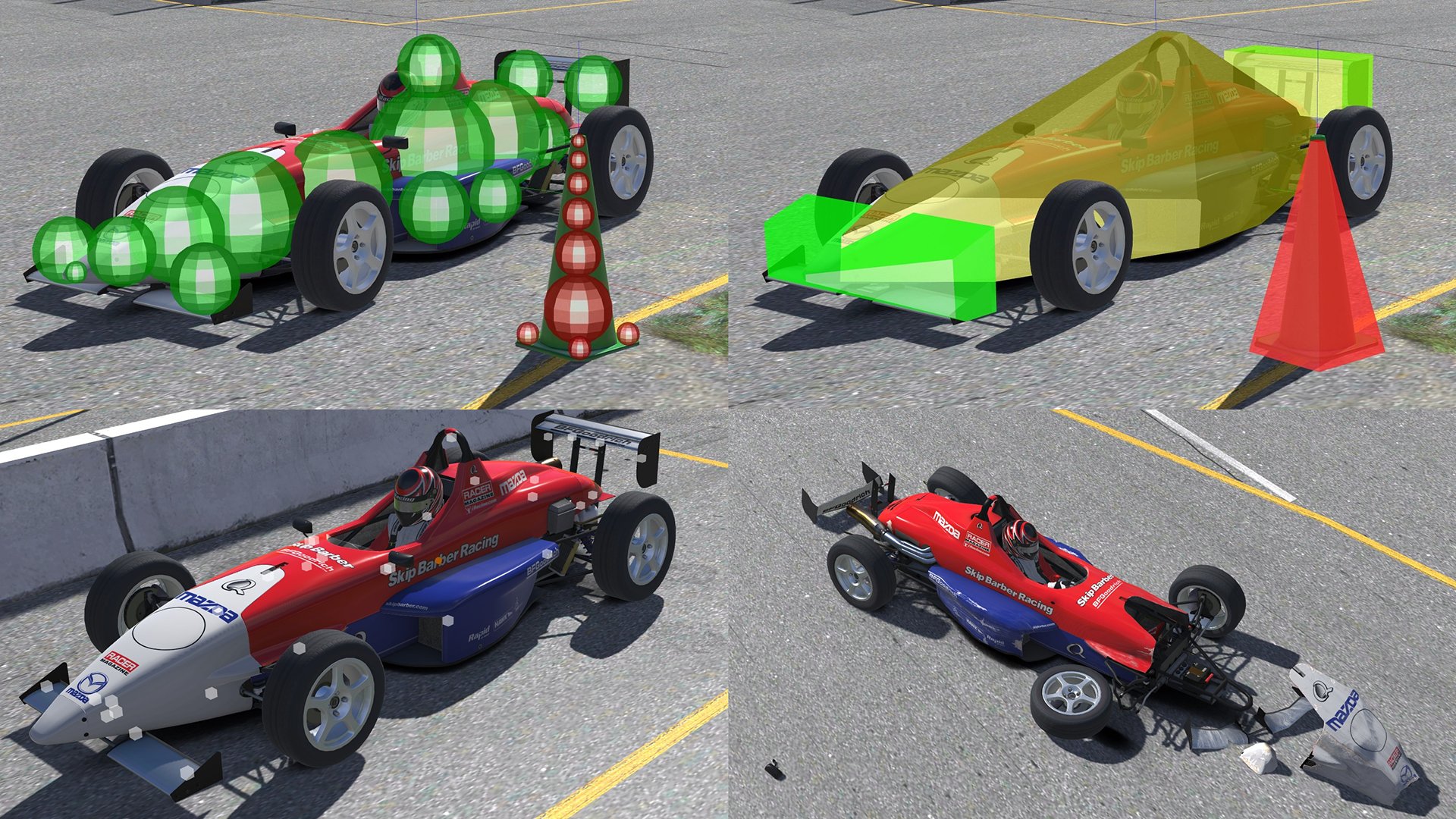 Wrecking is an unfortunate part of racing. It also represents one of the hardest hurdles for sim racing developers to overcome. To help players understand just what a detailed system entails, iRacing has released a new behind the scenes video of its upcoming dynamic damage model.

The seven minute clip is a fascinating peek at the amount of work needed for a convincing model. To its credit, the team doesn’t shy away from showing the relatively simple existing model. Using a series of spheres to represent the car with parametric track surfaces, the current approach has its limitations, as you can see early on in the video:

“For the new system, we’ve built new high-resolution meshes for each track,” explains Richard Jobling, senior software engineer. “This is more efficient, and gives a lot more flexibility for the car shapes. The new mesh incorporates all the track features our guys work so hard to replicate. Things like curb geometry and changes in the surface material are all baked into the mesh. We’ve also taken our laser scan data and applied that to the mesh.”

Cars come in for a big overhaul too. Gone are the spheres, and in come more detailed convex shapes. Not only do these allow more accurate, region-specific crashes, but they have a knock-on effect to the rest of the package. The art team in particular needed to go over the iRacing car roster with a fine-tooth comb.

“We’ve got a rather sizeable number of cars in our portfolio, and not all of these cars have been built with this dynamic damage system in mind,” says VP of art and production Greg Hill. “So what we had to do is, one by one, go through our race cars, and we had a team of three artists… all took on each car one at a time.”

Essentially, the team has had to rebuild many of the cars, even going back to reference material in some cases. Modelling the underlying structures — and crucially, how the exterior panels attach to them — feeds back into the physics side of the equation, allowing the team to more accurately represent the effect damage has on a car’s handling model.

Collisions themselves need to be convincing too of course. The best visual damage modelling would mean little if car/car or car/wall interfaces had all the drama and believability of Tommy Wiseau. Luckily, vehicle dynamicist Chris Lerch explains how the team has tackled this aspect:

“We’ve spent quite a bit of time going through literature from the automotive industry on the subject, to make sure that we have panels that deform the way they’re supposed to, both temporarily and permanently. That pieces that don’t deform, but rather break, break at appropriate times and in appropriate ways. The cars are absorbing energy the way they should and aren’t bouncing off the walls in crazy ways.”

The end result? You can be the judge yourself, by heading to the 6:40 part of the video up top. To our eyes, it looks pretty great! For an even more detailed explanation of everything going on with the new damage model, read Jobling’s own blog post on the official iRacing site.

Players looking forward to trying the new damage model will have to wait. The iRacing team hasn’t announced a release date quite yet. By its very nature, it also can’t be piece-mealed into the title, either. Once every car has been rebuilt for this new approach, we can expect more info on availability. Stay tuned for more iRacing news here at GTPlanet.

Michael Leary · Aug 7, 2018
Formula One and iRacing fans, rejoice! In a surprising turn of events, the iRacing Motorsport Simulation team has announced a partnership with the Mercedes-AMG Petronas F1 team to bring “multiple” cars to the PC racing sim in future builds.

Michael Leary · Aug 7, 2018· 3 Comments
The iRacing Motorsport Simulation team has given a taste of what’s to come in the 2021 Season 4 build of the PC racing sim. While there’s no formal announcement as of yet, the team has uploaded a number of “Season Spotlights” videos to the official iRacing YouTube channel.

Andrew Evans · Aug 7, 2018· 3 Comments
One of the world’s oldest remaining motorsport events, the Mount Washington Hillclimb, has a new digital lease of life, taking its place as the first point-to-point course in iRacing — at the same time as Travis Pastrana was breaking his own record at the event.

Andrew Evans · Aug 7, 2018· Comments
Like so many other championships, IndyCar has seen its calendar all but destroyed by coronavirus concerns. That includes the 2020 running of the famous Indianapolis 500 — one of three races in the Triple Crown of Motorsport — which is now due to take place in August rather than the traditional May date.

Andrew Evans · Aug 7, 2018· Comments
With the motorsports calendar in disarray this year, esports is experiencing a popularity surge. Viewers are tuning in to watch virtual sports in their hundreds of thousands on streaming platforms, and now it seems that traditional broadcast media is after some of that action too.

Michael Leary · Aug 7, 2018· Comments
Following up on the first build of 2020, the iRacing team has released the Season 2 build to all subscribers. Headlining the new season are two new additions: the Porsche 718 Cayman GT4 MR, and the Norwegian rallycross circuit Lankebanen.

Michael Leary · Aug 7, 2018· Comments
Last September, iRacing’s Steve Myers confirmed the Porsche 718 Cayman GT4 Clubsport would make its way to the PC racing sim. Now, we can set our sights on taking the GT4-class racing machine for a spin in March.