With the official Formula One pre-season testing getting underway in Bahrain today, Haas F1 has finally taken the covers off its 2021 challenger, the VF-21. Like the rest of the grid, the 2021 Haas is effectively the same car as the 2020 machine underneath, but some things are a little different this season.

Even though some development on the car has been possible — as we’ve seen with every other design evolving slightly — Haas has opted not to do so. In fact other than the changes required by the regulations, and some modifications to account for the new powertrain from Ferrari, the Haas is pretty much unchanged. The team has spent none of its development tokens or spent any resources on the VF-21 to search for any more pace this season.

Simply put, the VF-20 was something of a disappointment, and the static regulations don’t play into the teams hands at all. Instead of spending time and resources polishing the proverbial, Haas is treating 2021 as a transition season before the major regulation changes in 2022, and planning accordingly. 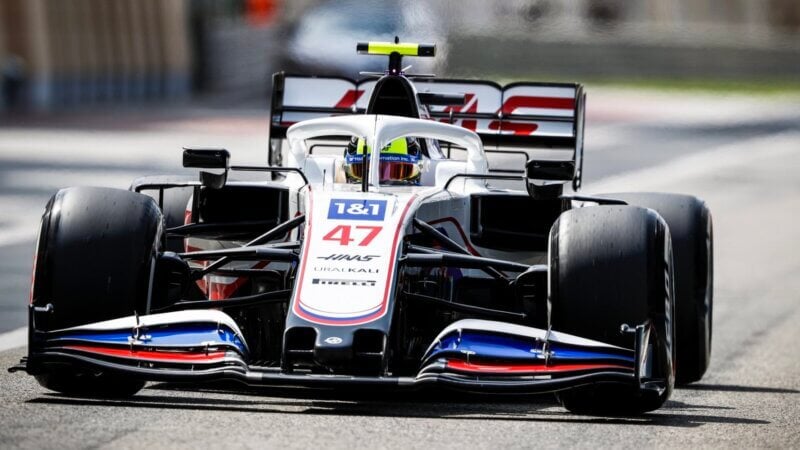 At the very least though, the VF-21 should generate some more straight line speed. Like Alfa Romeo, Haas buys its engines in from Ferrari, and the Maranello team has developed the engine for 2021. At times in 2019, Ferrari was close to Mercedes for engine pace, although there was an FIA investigation into that power unit which was settled confidentially. While it was off the pace in 2020, we’d expect the new power unit to narrow the gap again.

Yielding more power from the Ferrari engine is likely only to mask the VF-21’s problems at best, or exacerbate them at worst. The new regulations are designed to strip some of the downforce from the cars, as tires were approaching their loading limits in 2020. Other teams have all sought to recover as much downforce as possible, but Haas will simply run with the downforce penalty.

Nonetheless, aside from a change to the driving personnel and new livery — both bringing their own controversy — that’s about the sum total of changes from the 2020 season for Haas. It will be a significant moment though when Mick Schumacher, son of seven-time world champion Michael, takes to the wheel of the #47 Haas in Bahrain this weekend, and takes the start in two weeks’ time.

On the face of it then, it seems that Haas is in for a very tricky season, as rivals have all sought to adapt to the new regulations. We’re not expecting the cars to trouble the scoreboard, or even the second qualifying session for much of the year. That should, at least, make for a great fourth season of Netflix’s Formula 1: Drive to Survive…

See more articles on 2021 Formula One World Championship and Haas.