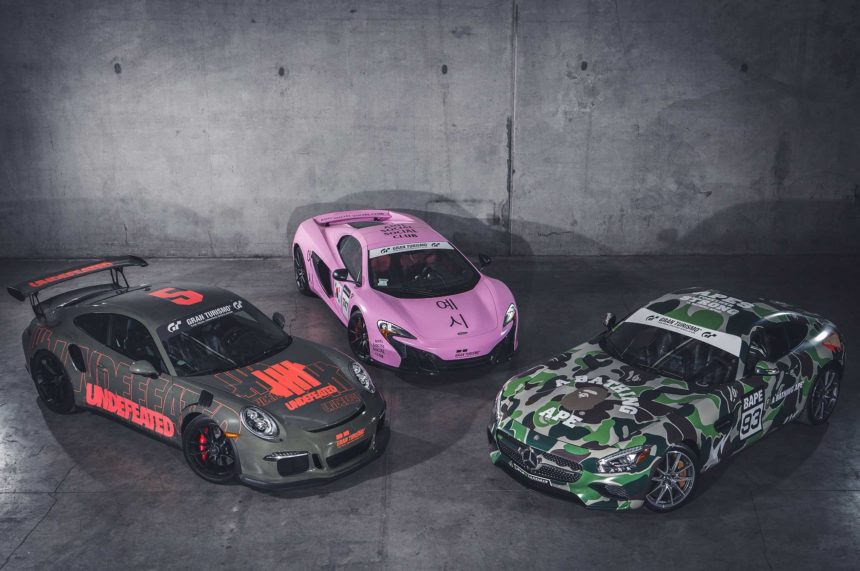 The 2017 PlayStation Experience was held in Anaheim, California over the weekend. Gran Turismo Sport was on full display at a massive booth of its own, which hosted races for attendees complete with live commentary from GTPlanet’s own Tom Brooks.

The biggest news for GT fans, however, was the all-new, officially licensed Gran Turismo merchandise released at the show. Polyphony Digital partnered with streetwear brands Undefeated, A Bathing Ape, and Anti Social Social Club to produce the limited-edition apparel.

“It really started with Undefeated, they’ve been a great partner with us. From there, we were thinking about what other two brands would make sense to add with them,” said Carter Jung, Senior Manager of Social Media for Gran Turismo.

In addition to the merchandise, each company used the Livery Editor in Gran Turismo Sport to create a custom design on cars in the game. BAPE made a camouflaged Mercedes AMG GTS, Undefeated created a military-inspired Porsche GT3 RS, and ASSC wrapped a McLaren 650S in their signature pink.

“BAPE was a natural fit, as they do a lot of stuff in the automotive space. With Anti Social Social Club, Neek [the company’s owner] is a car enthusiast. He owns a ton of cars and he’s done a lot of stuff like wrapping vehicles, so it just made a lot of sense,” Carter said in a video with Complex News.

The Undefeated and BAPE merchandise was available for a limited time at the PlayStation Experience store. The ASSC t-shirt and hoodie could only be purchased via the company’s website and sold out in two minutes.

Here’s a closer look at all the merchandise from each company:

GT MerchandisePlayStation ExperiencePolyphony Digital
67 Comments Discuss this post in our forums...
Test Your Badge Knowledge With Our Car Logo Quiz

Forza Series 17 Jun 13 by Andrew Evans
Microsoft has officially announced Forza Horizon 5, and at the same time confirmed both its setting and launch date. As expected, the Horizon Festival will move across the Atlantic to…