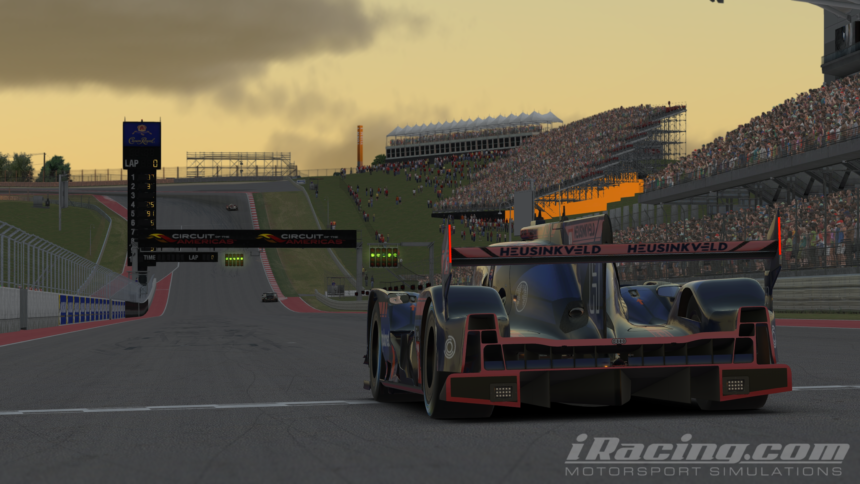 We’ve had some incredible races in the iRacing Endurance Le Mans Series over the last nine months. We’ve experienced wins, tight finishes and coming back from difficulty to good results. However, this race would make everything else look like a walk in the park.

The second round of the iELMS season would see us take on Circuit of the Americas. It’s a track that doesn’t really seem to know what it is. For those unfamiliar with COTA, it features fast, snaking corners, along with the most infuriating low-speed hairpins you’ll find on any circuit. The layout makes it hard to find a rhythm. No rhythm leads to missing apexes and inconsistent lap times.

Not only is it hard to be consistent at COTA, but the track limits are infuriating. With the lack of a visible limit for the dreaded 1x, it makes attacking the course extremely difficult. Add in yellow slabs that want to hurt you in the most flowing section of the track, and an already tough track is made even tougher.

The layout is also a nightmare for setup creation. For COTA, you need a setup that has good top speed, good grip in high and low-speed corners, along with the agility to negotiate traffic. With the track being tough to master, we went with a setup that was more nimble – something we hoped would help us when it came to passing traffic.

For ultimate performance, the setup was the correct choice. Bailey took our blue and red machine to third on the grid, less than a second off pole. After the performance deficit at Sebring, this was an encouraging result. As with Sebring, we had another of the very fastest LMP1 driver’s in the field – Marcus Hamilton. To be within a second of a fast 919 in qualifying is usually a very good sign, but we were about to get a shock.

As the lights went green, Bailey lept forward with another terrific start. He pulled alongside second place into turn one. However, not wanting to risk too much at the very first corner, he braked a little early, hoping to get into an early rhythm and get a feel for the race. We certainly got a feel for how the vast majority of the race would be very quickly.

SimTech Motorsports started back in seventh. We didn’t really think much of it, other than noting that Standa Sehnall, the team’s starting driver, is usually quite aggressive at the start. Sure enough, he went from P7 to P4 as the race went green. Soon he would be taking our third place. While he hadn’t shown great one lap pace, SimTech had a car that was extremely quick in a straight line.

This was a theme that would continue throughout Bailey’s first run in the car. Despite being faster through the turns, he couldn’t use the speed of the car. Not only was the car understeering in the dirty air of the SimTech R18, but it also wasn’t working in traffic.

After a stint being stuck behind SimTech, we decided to come in slightly early to throw on some new tyres, in the hope of getting the undercut. That went out the window as Standa pitted the lap after us. With our plan negated, it appeared 45 minutes of frustration would become 90.

The gap ebbed and flowed for most of the stint. A mistake here and there from Standa brought him back to us, then traffic allowed the gap to grow a little again. It remained this way until the beginning of lap 48, with Standa getting tagged by a P2. After 47 laps of frustration, we were finally free. Of course, it came right at the end of Bailey’s stint, but the important part was the 10-second lead.

After being a handed an unexpected lead, I just wanted to make sure I didn’t bin it. Not only do I dislike COTA, but I’ve never been able to figure out how to go fast around it. The track limits and anti-cuts force a level of concentration not many tracks do. When you’re trying to handle traffic and race at the same time, it adds even more stress to the already elevated multi-class concerns!

Even with those concerns, my first stint went well. The differences in setup showed again, as Matej closed the gap through traffic, but we still held the lead by around 3.5 seconds before I pitted for the first time. Despite an annoying couple of laps with a lapped car, the gap remained the same for much of my second stint. It even extended a little over the course of yet another incident-free stint. Another uneventful, if stressful, double stint completed for me.

It all started well for Bailey. The gap extended to nearly 10 seconds, a huge gap in the context of this race. Despite this, he was sounding more and more stressed. This started to compound itself in more off track’s and clipping one of the deadly anti-cuts. In true iRacing tradition, this bent the carbon fibre bodywork. Not only was the top speed reduced by 4–5km/h, but the car had lost its edge in the corners.

It didn’t take long for Standa, now reinstalled in the SimTech R18, to reel Bailey in. With both the handling and our top speed effected, it was a question of when we’d lose the lead, not if. Eight laps later, the inevitable happened. Thankfully, and frustratingly, the damage repair was only 1.9 seconds. Bailey’s final stint was much smoother, although our setup choice came home to roost again, with the gap going out to around seven seconds as we lost out through traffic.

I’m used to Bailey being able to pull out gaps or close on people in front of us, which reduces the pressure on me, but this time it was on me. This time I had to go out and win it. With less than 90 minutes remaining, the only option was to attack. A lap later, SimTech also changed drivers, with Matej getting back in. Given I was able to pull a gap, at times, through my first run, I knew there was still a chance to win this thing.

Chasing can be so much fun. It’s almost a licence to attack. The leaders have everything to lose, while you can afford to be a little more relaxed about things. Only a handful of laps in, the gap was halved. Upon closer inspection, Bailey noticed the SimTech R18’s left front headlight was out of place. That minuscule piece of visual damage had turned the tide in our favour. With SimTech’s top end slightly nullified, the win was on.

With just over an hour to go and after closing to within a second, Matej blinked at the turn 12 hairpin. He went in just a little too deep and I was able to swoop to the inside and grab the lead. This was such a big moment. While his car was a little hobbled down the straights, it was still quicker than mine, but by now there were fewer cars on the track. This was the time to use our strength and make the race ours.

The gap eeked out, little by little. Six, seven then eight seconds. Then Matej blinked again. SimTech’s tiny headlight displacement had become far more significant. Their car was now crippled after another hit with an anti-cut. Matej pitted, repaired the car and handed back to Standa. If the race wasn’t already ours to lose, it soon would be.

Standa, in his efforts to close the substantial gap, pushed beyond the limits. He’d fallen victim to one of COTA’s evil anti-cuts. It had taken some 530 minutes of intense pressure, but finally, we could ease up. I dialled it way back. We’d lost too many wins through late-race incidents – we weren’t losing this one.

The checkered flag brought the most incredible release. Six hours of being in something that resembled a pressure cooker, and we somehow won. We still don’t know what happened to the leading Porsches, but it gave us an opportunity we never thought possible. I still can’t quite believe that we won at the most intense endurance race I’ve ever been in.

Next up for us in iELMS is the 6 Hours of Motegi, this coming weekend. Here’s hoping we can add to our record of podium finishes. I won’t be sorry if it’s a little less stressful!