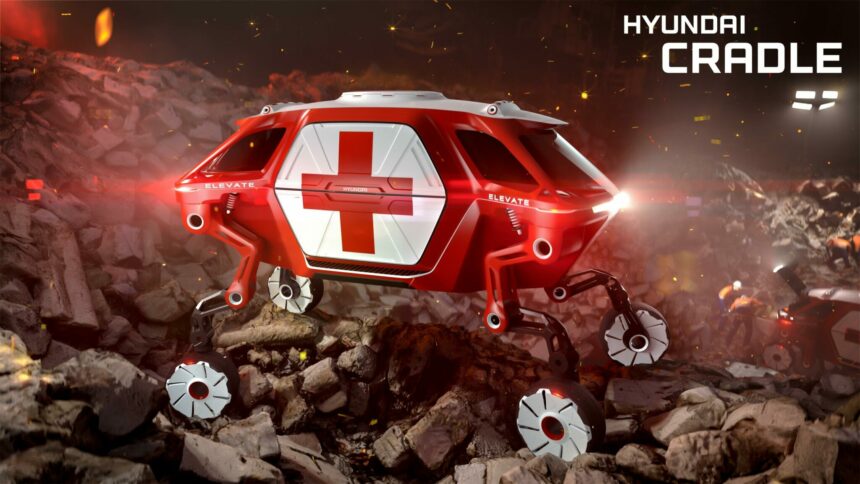 At what point is a car no longer a car? This is the question we’re asking ourselves after Hyundai unveiled its new Elevate Concept at CES 2019.

The Elevate seems to follow a regular, futuristic pod-like design concept at first glance. However, what sets it apart is that it has the ability to walk, as well as drive.

Yes, just like the AT-AT in Star Wars, the Elevate can trek along on all fours. It can also climb vertical surfaces and span five-foot gaps as well.

The reason behind this ultimate mobility is in the name of disaster rescue. According to Hyundai, the most important time for search and rescue is within 72 hours of the start of a disaster. However, this also happens to be one of the trickiest times to get rescue crews to the areas of need.

With the ability to walk, climb, and drive, the Elevate can make short work of any terrain. As a result, it can reach more people in a shorter amount of time. It also allows for greater safety to the rescue workers too. No longer will they need to walk over rough ground.

Hyundai has other plans for the Elevate as well. According to John Suh, Hyundai vice president and head of Hyundai CRADLE, people living with disabilities will benefit as well:

This technology goes well beyond emergency situations – people living with disabilities worldwide that don’t have access to an ADA ramp could hail an autonomous Hyundai Elevate that could walk up to their front door, level itself, and allow their wheelchair to roll right in – the possibilities are limitless.

The Elevate uses hub-mounted electric motors for propulsion. When in transit mode, the motors can move the Elevate along at highway speeds. As a result, it’s a versatile vehicle.

Hyundai gets the Elevate to walk using legs with five degrees of freedom. The leg motors are non-back-drivable as well. This allows the legs to lock into various positions, including those that mimic mammalian and reptilian movements.

If that wasn’t enough, the Elevate’s body can be swapped out thanks to its skateboard-like design. This allows for rescue workers to pick the best configuration for the task at hand.

The likelihood of the Elevate going into production is slim. However, it shows an ingenious solution to a problem facing our world today.

CES 2019Hyundai
16 Comments Discuss this post in our forums...
Can You Beat the Impossible Gran Turismo Quiz?

Automotive News 11 Feb 21 by Andrew Evans
New US brand Czinger Vehicles will officially reveal its first car at the Geneva Motor Show next month, and it’s quite the debut. Known as the 21C — shorthand for…