The iRacing Motorsport Simulation team has given a taste of what’s to come in the 2021 Season 4 build of the PC racing sim. While there’s no formal announcement as of yet, the team has uploaded a number of “Season Spotlights” videos to the official iRacing YouTube channel.

Arriving in the next few weeks, the fourth season appears to bring a lot to the table for players, namely a series of updates to the likes of AI, GT3 class racing, IndyCar, and more besides, with particular focus on tire model improvements. Let’s take a closer look at some of the changes featured in the upcoming build.

In Season 4, iRacing’s AI driver expands down under with the Ford and Holden Supercars now able to race at Bathurst, Oran Park Raceway, Phillip Island Circuit, and other unspecified track locations. AI drivers continue to make headway on the oval side of things too with the addition of the Super Late Model and a number of tracks, including Five Flags Speedway and Bristol Motor Speedway.

There’s been a “fresh round of testing and rebalancing”, as well as changes to improve the AI behavior across the board but especially in close-contact, side-by-side racing. As iRacing’s AI continues to improve, it won’t be long until the feature is even more of a viable option for newcomers and veterans alike.

A few of the game’s Class D road cars will be in the spotlight next month, with updates to the Ford Mustang FR500, Kia Optima, and Pontiac Solstice.

The Mustang, running in the Sim-Lab Production Car Challenge, will be on the receiving end of tire parameter improvements, aimed at reducing the time taken to heat the tires up, but also to make the car a little more forgiving on those cold tires. In addition, the brake balance has been shifted to the rear to help the Mustang with some of its understeer issues and improve corner entry behavior.

There’s tire parameter updates for the Solstice too, with a racing tire replacing a street option. That will improve the Pontiac’s cornering speeds to bring it into line with other cars in its class, also in the Sim-Lab series.

Finally, there’s the Kia Optima taking part in the Fanatec Global Challenge. That also sees a rearward adjustment to the brake balance for corner entry improvements, but also a tires parameter upgrade aimed at keeping the car’s rubber in its performance window for longer.

The IR-18 is set to receive a road course tire model update, with the car’s real-world drivers behind the changes.

Feedback from the pros means that the rear tires now withstand a bit more punishment, with drivers able to load them up better to make the car a good deal more fun to drive aggressively.

In addition, players can expect the the real-world performance of the red (soft) and black (hard) tire compounds are better reflected in the sim, giving players better strategy options over the duration of a race.

If that weren’t enough, competitive setups for IR-18 will be made available in the game’s setup folder over the course of the season. This should add a great deal of variety for the open-wheel racer as well and combined with tire improvements, we can’t wait to see what kind of wheel-to-wheel action awaits.

The GT3 class will also see updates across the board, from tires to BOP, as well as driver assists.

Again, tires are a major focus, with better warm-up and falloff curves — an area that has seen some players exploit the existing model in esports. However generally the tires will feel more robust, particularly in high load cornering.

There’s “quality of life” chassis updates to the Ford GT, McLaren 12C, Mercedes-AMG GT, and Porsche 911 R GT3 models, along with traction control updates; the McLaren and Ford have update ranges to fit in better with the rest of the class.

Class-wide changes to ABS characteristics as well as balance of performance will also be implemented — though not specified yet — to tighten the class up. However this does all mean that your pre-Season 4 car setups will need revisiting.

The Lotus 49 and 79 Formula One cars both receive major changes to bring further authenticity.

To achieve this for the 49, iRacing has used spec sheets from the 1967 and 1968 F1 seasons, adjusted the car to better reflect how it would have raced in reality. Items like the adjustable anti-roll bars are removed in this build, with the ARB thickness amended to fit with the real thing.

Settings items like camber and pressure are also now in a more realistic window for the time. Over the course of Season 4, iRacing will provide track-specific base settings for the car too.

Again, tires are a major feature, with the intention being to make the 49 a little easier to learn, if no less tricky to master. Tire behaviour up to and at the limit should be more predictable than before, though the car will still provide a stiff test to drive.

The Lotus 79 also sees tire improvements, on both road and oval setups, to improve the feel at and beyond the limits of adhesion. That will affect top speeds — for the better — but also apex speeds as the car more readily transitions from grip to slip.

That means players should expect their lap times on technical circuits to be suffer, though the times on power tracks will stay the same or even improve. However iRacing will provide nearly 20 setups across the season — one for each week of the official series — and Phoenix and Indy setups for both high and low downforce options.

The Season 4 build will bring an update to the full spread of NASCAR ladder vehicles, starting with next-gen dampers for the Class B (Xfinity) and Class C (Camping World Series) vehicles.

On the full next-gen stock car the dampers have a six-way adjust, but the Xfinity cars will feature a five-way and the trucks a four-way. This replaces the old two-way shocks and their limited range of alteration, while also serving as a tool to adapt to and learn how the dampers adjust on the way up to the full range on the top tier cars.

Naturally there’s also a road course tire update, again driven by feedback from members and pros, which will cover both the classes above as well as the Gen-6 and Gen-7/Next-Gen Cup cars. The goal is again better on-limit feel as well as tire consistency throughout a race distance.

The Season 4 update is penciled in for a September launch, but there’s no official word yet on any on specific date. We’ll bring you more as we get it. 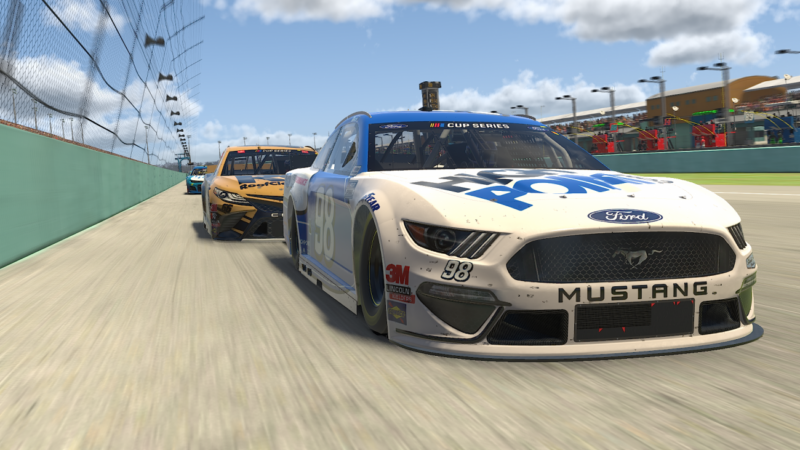