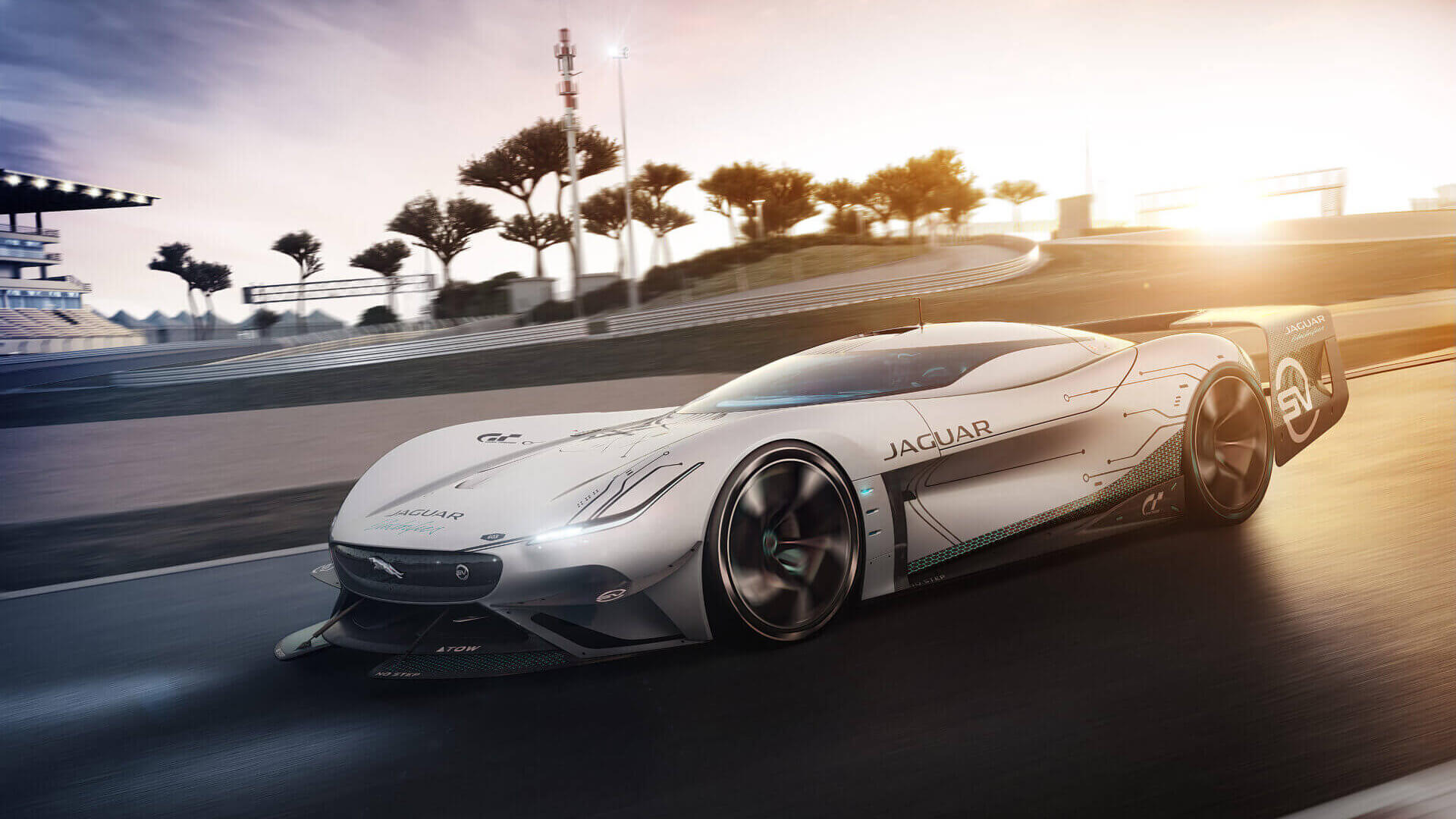 Although the full unveiling doesn’t happen until later today, Jaguar has revealed its new Vision Gran Turismo car this morning.

It’s derived from the original Vision Gran Turismo Coupe we saw in Tokyo last year, but with a few changes and upgrades based on player feedback and response. Not only that, Jaguar’s built a full-size scale model in the real world too.

The 2020 model goes by the name of Vision Gran Turismo SV and, as the name suggests, it’s the result of handing the original car over to Jaguar Land Rover’s Special Vehicles (SV) department. That’s the branch responsible for the fastest and most exclusive versions of vehicles from the two brands, and that comes with some expectations.

The first of these expectations is more power, and the VGTSV certainly meets it. It sports a four-motor setup rather than the three-motor arrangement of the original, adding an extra unit to the front axle. Each of the front motors delivers 300kW (402hp), and with the two rear motors now providing 400kW (536hp) each, total system output is 1,400kW, or 1,876hp.

That’s almost double the 1,005hp of the original car — and it’s not like the first Jaguar VGT was sluggish. All that power roughly translates to a 0-60mph time of 1.65 seconds, with a top speed of 255mph.

With one motor driving each of the car’s wheels, through its own single-speed transmission, the SV has fully independent torque vectoring. Any amount of torque, up to the maximum rating of each motor, can go to any wheel at any time, which should provide considerably better traction and handling than the old car.

The power itself comes from an unspecified lithium-ion battery pack located in the car’s platform. Of course the extra battery performance required also means additional cooling to prevent derating, so there’s a system to pump liquid nitrogen around the battery pack.

A more obvious change is one you can see even when the car isn’t moving. The simply enormous rear wing helps to add almost three feet to the VGT’s length. Jaguar says it’s inspired by the wing you’d find on the XJR-14 Group C endurance racer, and you can see why — but it’s a little more advanced.

It consists of three separate sections, with the main body fixed in place and two areas which move to provide more downforce at higher speeds. The wing itself is only part of an aerodynamic overhaul of the original car for better performance in both areas.

There’s a new front splitter, and new channels to smooth airflow through the wheel wells. The vehicle underbody is completely enclosed, and features a “keel element” behind the front axle which acts like the shark fin does up top. At the back there’s also the standard venturi.

On the inside, there’s not so much change from the original vehicle, with an almost identical layout to the car we saw last year — even the four-point belts remain. There’s a difference in materials, with Jaguar using a new fabric called “Typefibre” it intends to use on the I-TYPE Formula E racer next year, but otherwise it’ll be very similar for those who drive in cockpit view.

“Jaguars created for the race track and the road have always shared the same DNA – whether that’s the D-type and XKSS, or the I-PACE and the I-TYPE. So, when the design team behind the Vision GT Coupe were asked to create the ultimate electric gaming endurance racer for Gran Turismo, they worked with engineers from SV and Jaguar Racing to create something really special.

“The Vision GT SV is a dramatic and visually arresting car which showcases what’s possible when the traditional boundaries governing real-world car design are completely removed. In bringing this car to life with a full-size design study we’ve been able to showcase the most extreme version of an electric Jaguar race car that is inspired by the past but looks fearlessly to the future.”

Given that GT7 is scheduled for a 2021 launch, and several of the in-game images you’ll see here are not possible in Sport, that suggests the latter, but it looks like we’re going to have to wait to find out.