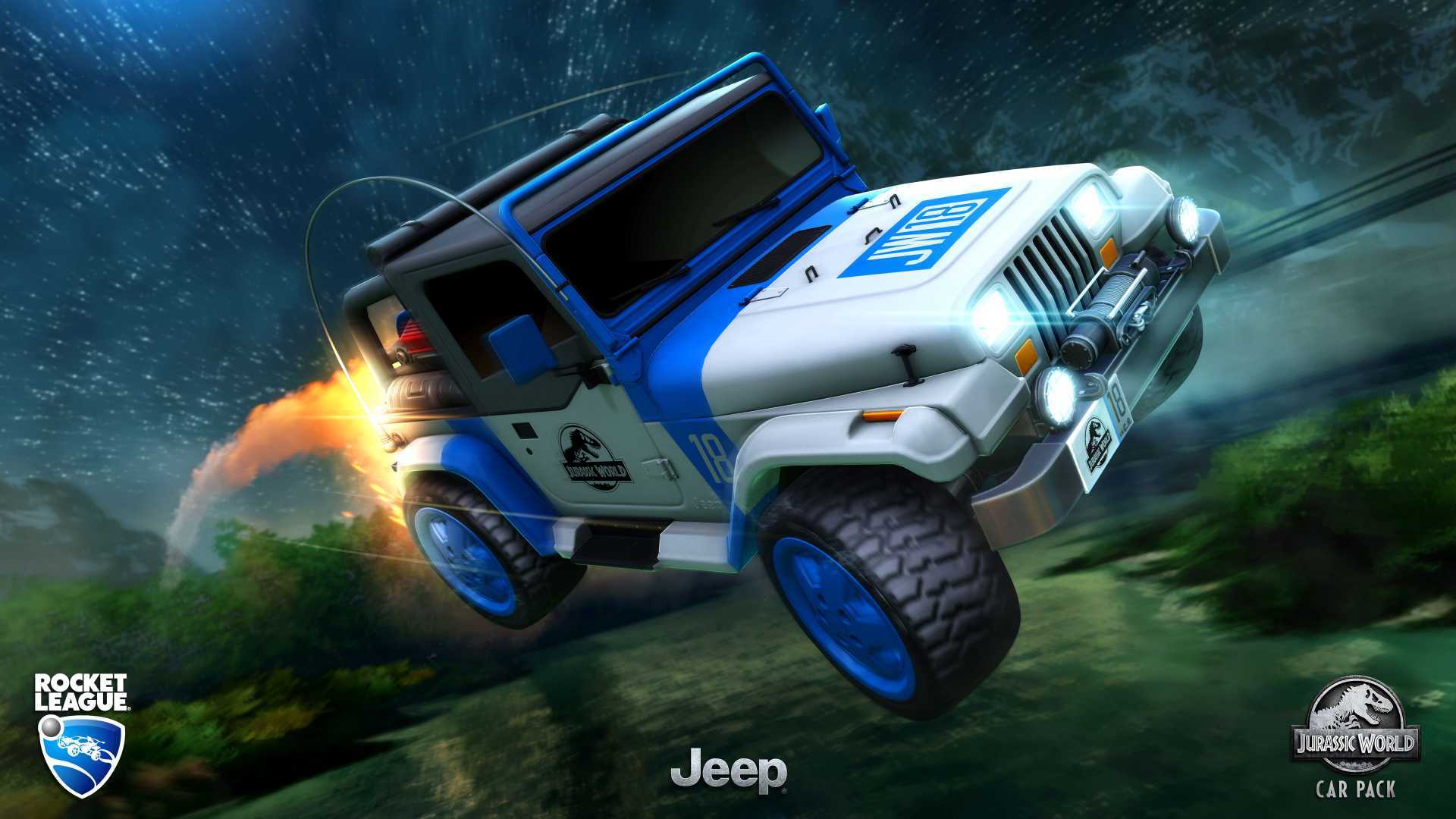 Another licensed vehicle is making its way to Rocket League. The popular car football (not soccer) game has added a few real cars over the years and the Jeep Wrangler is next in line. The premium DLC comes as a tie-in to the latest Jurassic World movie, due out next week.

The Wrangler arrives in two colors so that it can used in both the away and home team. Kitted out in red and blue, the Jeep suits the world of Rocket League perfectly. A fantastic teaser trailer shows exactly why you will want to spend a bit of spare change on the car.

One of the cooler elements in the DLC Pack is the goal celebration. Upon scoring, an explosion bursts into flames as a T-Rex lets out a mighty roar. It really is as awesome as it sounds. Pricing is set at $2.00 and includes the car (in both home and away colors) and T-Rex goal celebration. The Wrangler is using the Octane hitbox which is sure to be good news for competitive players of the game.

If you fancy adding a bite of dino to your Rocket League experience, the DLC will be available June 18 on all platforms.

Andrew Evans · Jun 6, 2018· Comments
Need for Speed and sports clothing brand Puma have teamed up for a crossover capsule collection with game-inspired clothing that allows you to match your avatar from the virtual environment of NFS Unbound.

Gary Slater · Jun 6, 2018· Comments
February has graced us with its presence, and has also brought along a new Spring season for Forza Horizon 4. We’re into the closing stage of Series 57, with one more week of cars to win and events to complete before the next series arrives.

Andrew Evans · Jun 6, 2018· Comments
The new Series of Forza Horizon 5 is here, celebrating all things Japanese automotive across the next four weeks.

Jordan Greer · Jun 6, 2018· Comments
I just got back from a trip to PlayStation’s North American headquarters where I had the chance to be one of the first people to play Gran Turismo 7 on the PSVR2, and I’m here to tell you all about it.

Michael Leary · Jun 6, 2018· Comments
Ubisoft has announced the third installment of its multi-vehicle-type racing game series The Crew will be called The Crew Motorfest, and is on the slate for a launch later in 2023.

Andrew Evans · Jun 6, 2018· Comments
Competition Company has announced that its new racing sim, Rennsport, has missed a second scheduled milestone on its approach to a late-2023 launch, with its closed beta phase once again postponed.

Andrew Evans · Jun 6, 2018· Comments
The latest set of Gran Turismo 7 Daily Races is now available, running across the next seven days, and marking a return of tuning to the events.