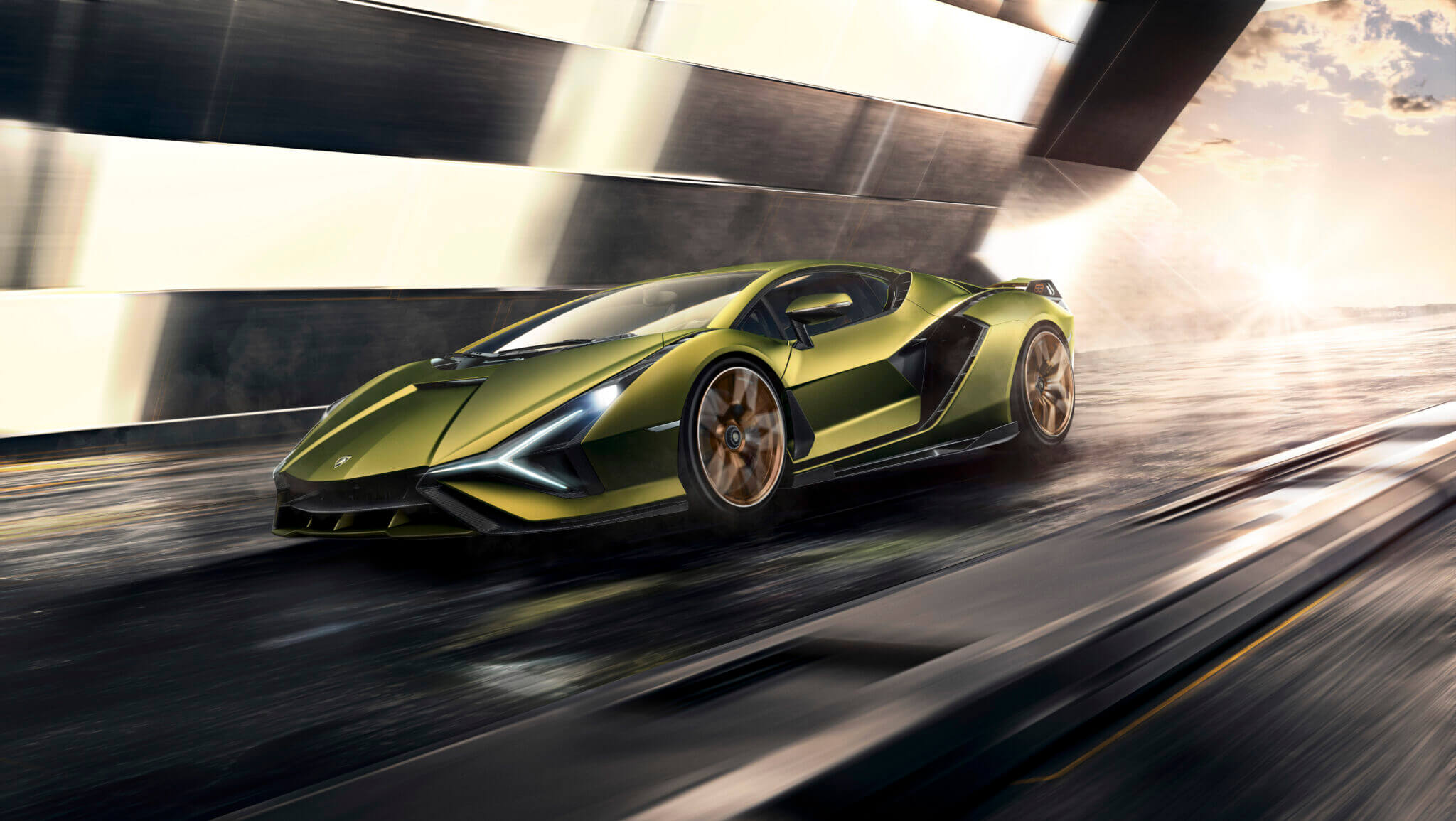 Lamborghini is getting a jump on the usual Frankfurt Motor Show madness by unveiling this, the limited-production Lamborghini Sián. Not only is it the marque’s most powerful model ever, it’s also the first electrified product out of Sant’Agata.

The Sián — which means flash or lightning in the local Bolognese dialect — pairs the fire-and-brimstone V12 Lambo engine with a supercapacitor instead of the usual lithium-ion battery hybrid approach. According to Lamborghini the 75lb, 34hp unit is three times more powerful than a battery of the same weight. It sits wedged between the passenger compartment and the engine with the goal of minimizing any effect on weight distribution.

A supercapacitor spends its stored energy far faster than a battery setup. But as a handy, performance-oriented trade-off, it also recharges much faster: at the same rate as it depletes, in fact. That means the Sián can fully recharge every time it brakes, storing up the next slug of torque for each corner exit. It can also exclusively drive the car at low speeds.

Lamborghini’s engineers didn’t just hook this up to an Aventador SVJ’s engine and call it a day either. This next-generation twelve-pot packs titanium intake valves and produces 785hp at 8,500rpm. This improved power and minimal weight increase gives the Sián a better power-to-weight ratio than any V12-engined Lamborghini ever.

How fast that ultimately translates to is unclear. The only figures the Italian company has provided are a 0-62mph dash of 2.8 seconds and a top speed of over 217mph. All-out high speeds are more the territory of fellow VW Group stablemate Bugatti.

The styling evolves the breed as well. It’s still all wedge, with a heavy focus on Y-shapes and hexagons in the details.  There’s numerous nods to the Countach, from a new-age take on the LP400’s Periscopio roof to the — yep, hexagonal — six taillights out back. It’s at the rear that Lamborghini has employed smart-material active cooling vanes. These respond to exhaust temperatures, rotating as needed to aid cooling.

Automobili Lamborghini CEO Stefano Domenicali had this to say on the Italian firm’s latest:

“The Sián is a masterpiece in possibilities. Not only does the Sián deliver a formidable hyper-car design and engineering tour de force today, it augments the potential for Lamborghini as a super sports car brand for tomorrow and for decades to come, even as hybridization becomes more desirable and inevitably essential. The Lamborghini Sián represents the first step in Lamborghini’s route to electrification, and expedites our next-generation V12 engine. Its Sián moniker, meaning ‘flash or lightning’ in Bolognese dialect, denotes the first electrification of a Lamborghini production car and confirms our strong connection to the territory in which we operate. With the Sián, Automobili Lamborghini demonstrates its dynastic strength as a legendary super sports car brand for the future.”

The Sián will be a far sight rarer than your regular ol’ Aventador too. Lamborghini will only produce 63 of the 819hp hybrid hypercar in honor of Ferruccio founding the company in 1963. And at what price? Well, if you have to ask, you’re too late: every one is already spoken for.

Lamborghini will show off the Sián to the public for the first time at the Frankfurt Motor Show, which begins September 12.