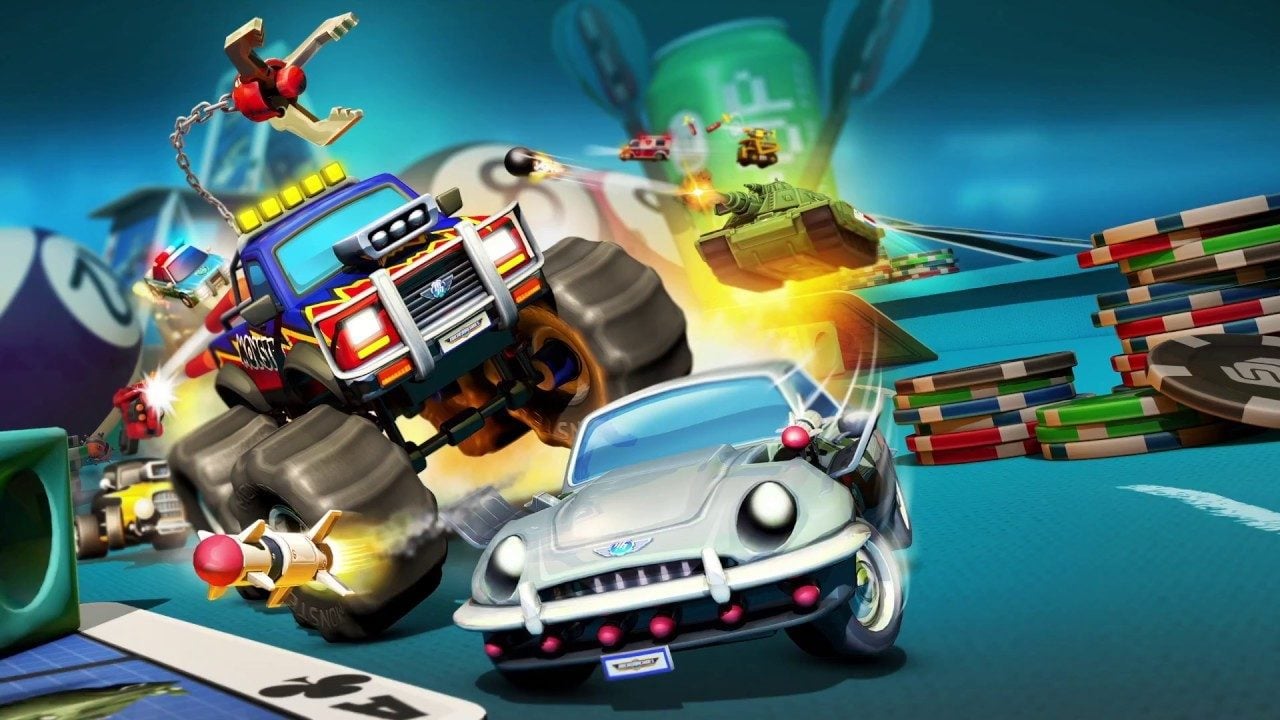 It has been a staggering 11 years since the last proper Micro Machines console game. The local multiplayer champion last graced our consoles during the PS2-era with Micro Machines V4. Micro Machines: World Series aims to revitalize the tiny toy racer for a new audience but unfortunately teeters between fun and frustration way too often.

Review codes for Micro Machines: World Tour were distributed to the GTPlanet staff by Codemasters.

As a reboot of sorts, going into World Series we didn’t expect a level of content found in titles like V3 or V4. Ultimately, the game disappoints in both car and track-list numbers.

World Series has 12 vehicles in total, which isn’t really a lot from any standpoint. Each toy has associated skins, voice lines, emoticons and explosion markers, borrowing a crate based system found in titles like Overwatch and Rocket League. The problem is that none of this content is really worthwhile. Most skins are simply a recolor of your existing vehicle and emoticons are limited to the chaotic battle mode. As it stands, you cannot buy these loot crates with real cash.

We can’t help but wish Codemasters had took a more traditional approach. You won’t find the vast array of vehicles found in that of V3 or V4. Boats don’t make the cut this time around, either.

The track and battle arena list comes in at a total of 25 — 10 racing tracks and 15 battle arenas. These arenas aren’t simple ovals with each offering a distinctly unique challenge. Credit goes to Codemasters for bringing a bit of variety here. The track list tackles scenarios found in previous games like a breakfast table and casino. Track design is good and suits the top down gameplay for the most part.

Game modes are restricted to quick race, elimination and battle offline. There is no championship or career mode whatsoever. Choose a mode, vehicle and track – that’s it.

There there isn’t a lot here across the board and the decision to lock vehicle content behind a crate system just seems misguided.

Speaking of those tracks, they’re probably the most interesting part of World Series. Although there aren’t many of them, they do look quite good, thanks to loads of detail and a memorable use of product placement. Codemasters has partnered with Hasbro here, leading to an abundance of toys and packaging strewn across the environments that are sure to resonate with any child of the ‘80s or ‘90s.

There’s G.I. Joe and Ouija, as well as Nerf guns. One of the battle stages actually takes place on a Hungry Hungry Hippos game board. You’ll even find playing cards and magazines with retro Codies logos, and other self-referential tidbits. As a budget-priced arcade racer featuring toy cars, you’ll never be seriously impressed with how World Series looks — but it will charm the pants off of you, and isn’t that what it’s all about?

In terms of sound, there’s much less that stands out. The music is forgettable, and the fixation on character voices for the vehicles is odd, to say the least. Sound bites are one of the main types of unlockables in this game, and we can’t imagine anyone — even ourselves as kids — being overly enthused about a silly catchphrase that plays when you eliminate someone, or get eliminated yourself. Nevertheless, they’re available for the taking if all those coins you’ve earned in matchmaking burn a hole in your pocket.

With all the action happening on-screen, staying pointed in the right direction in a Micro Machines game can often be harder than you’d think. Unfortunately, World Series’ handling doesn’t really make it any easier.

While there are indeed slight differences in the way each of the vehicles drive, they’re all really eager to kick the back out — which is precisely the last thing you want when you’re chasing someone down with the Nerf gun. Some are friendlier to come to grips with than others, with the hovercraft unsurprisingly being the worst offender.

The slidey physics really make matters worse when you can’t quite see what’s coming along the road ahead. Last-second maneuvers are exceptionally hard to pull off until you ascertain some semblance of control. Of course, the computer never has to worry about that — giving you the sense that the odds really are stacked against you. It’s in your best interest to really memorize those tracks fast. This obviously impacts the classic Elimination mode, which has a less-than-ideal camera pan in the first place.

Aside from the steering, there’s no discernible difference in speed or acceleration between the cars. One of the characteristics of a good arcade racer is an assortment of vehicles with balanced yet unique driving dynamics. However, World Series never makes any attempt to communicate such differences in the selection screen, if they even exist in the first place. It’s a real missed opportunity to deepen the shallow gameplay.

Micro Machines: World Series main focus is in the multiplayer. With pretty much zero substance to the solo experience, it was important the game nailed online. Players can experience quick matches or take to competitive play at rank 10.

We were able to find matches pretty quickly online which was initially a positive. However, we then learned that online races are auto-populated with AI and we were actually only getting matched with three or four real people in an online event. The majority of our experience was spent racing AI instead of human competitors. Regardless, Race, Elimination and Battle are as chaotic as ever.

Playing online earns you the loot boxes described earlier in the review. This appears to be the main motivation as options are severely limited online too. Quick Play and Ranked are almost identical with only a division system for earning more loot any sort of difference. AI still artificially pad these matches and items are still on too. It’s hard to understand why anyone would play quick play after unlocking ranked.

GTPlanet had some races online and found the experience to be a bit average at best. There was no lag mostly but when there was it was crippling due to the frantic nature of the title. At the conclusion of each race, the player is booted back to the mode select screen. There’s no queue system to immediately jump back in.

There are some game types with real potential here, particularly in the Battle Mode. Capture the flag is a fun one, as is another where you have to run bombs to your opposing team’s base. If you’re lucky enough to get a proper game going with enough people, you’ll have a blast. But, unfortunately, they’re also chosen at random — so you never know what kind of battle you’ll be forced to play next.

The bulk of World Series’ focus is on the online experience but there’s definitely improvements that can be made here. 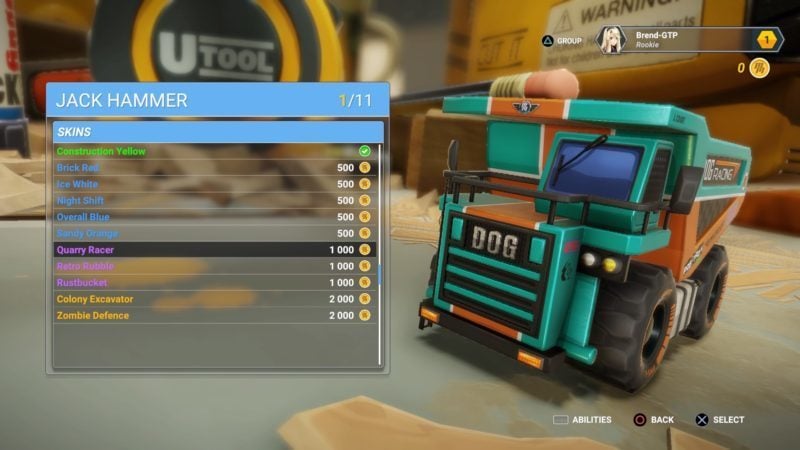 Even as a budget title, it’s hard not to feel shortchanged by Micro Machines: World Series. The decision to go with personality-based machines feels like a step back from the toybox feel of the older titles. 2014’s spiritual successor Toybox Turbos feels superior in every way as it stands both content and handling wise.

The biggest issue is that Codemasters seems to have targeted the Rocket League and Overwatch community with loot crates, character-driven vehicles and an absolute approach to online. It leaves the older fans disinterested and doesn’t do enough to try and win the new audience.

Despite a few bright moments, Micro Machines: World Series simply feels like the latest hyped-up toy that has no long-term appeal or substance. 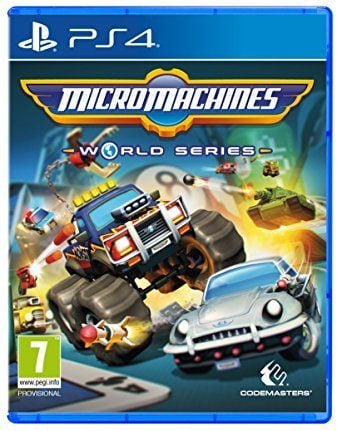 Ultimately, the game disappoints in both car and track-list numbers.
Graphics

You’ll never be seriously impressed with how World Series looks — but it will charm the pants off of you.
Sound Design

Aside from the steering, there’s no discernible difference in speed or acceleration between the cars.
Online Features

The bulk of World Series’ focus is on the online experience, but there’s definitely improvements that can be made.