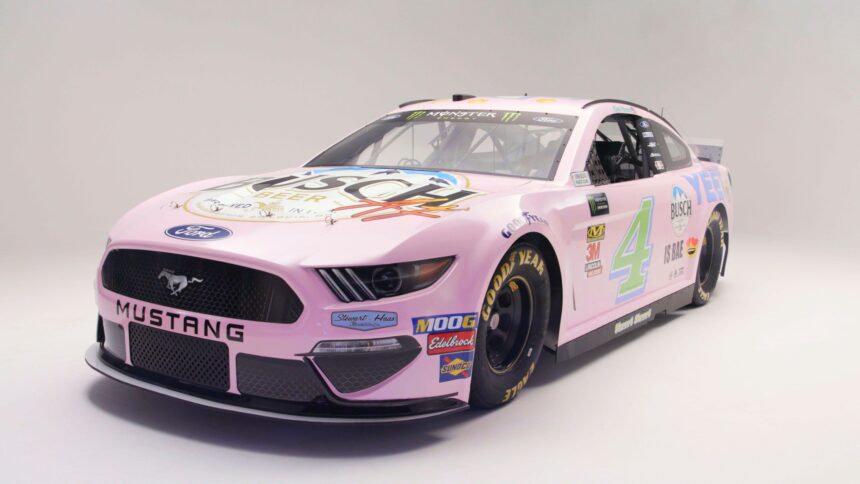 Making idle bets on Twitter is never a good idea. This is something that Busch Beer — the official beer of NASCAR (because that’s a thing) — forgot when it laid down a marker last November.

Busch was so confident that Kevin Harvick would win the Homestead-Miami season finale that it said it’d create a Millennial livery for the car if he didn’t. Well, spoiler alert, he didn’t. He came a very respectable third, but even a podium wasn’t good enough to save Busch’s blushes.

True to its word, the experts at inebriation set forth designing a very special paint job. It canvassed Twitter, again, for ideas for the livery, polling that part of the internet famous for Boaty McBoatface on its opinions. Today’s the day it makes its debut.

#MillennialCar is finally here IRL. Who else is ready for @KevinHarvick and the #MillennialCar to slay at the #AllStarRace? pic.twitter.com/3hqpFbM6KY

It’s really rather tricky to know where to start, as it seems to get worse the more you look at it. Aside from being littered with GenZ memes and catchphrases rather than Millennial, it’s a lot to unpack.

Playing a starring role is the “Busch AF” logo, which we agree is really rather Busch indeed. On one side, the car notes that “Busch is bae”, slightly below a rather conspicuous “YEET” sticker. We suspect that this car will, true to its word, be yote.

Emojis are numerous. There’s tea lizard on one side and avocado toast on the other, not to mention the hand gestures on the tail. Hashtag squadgoals. If we had to pick a truly favorite detail, it would be the “Skrrrt Skrrrt” on each sill — or side skrrrts.

Harvick will drive the Millennial Stewart-Haas Ford Mustang at the Monster Energy NASCAR All-Star Race in Carolina on May 18. Presumably cringing for the entire 90-minutes or so.

FIA WEC 107 Sep 19 by Andrew Evans
It’s fair to say that this years racing calendar hasn’t exactly gone to plan. That’s why we’re about to settle down for one of our favorite 24 hours of racing…