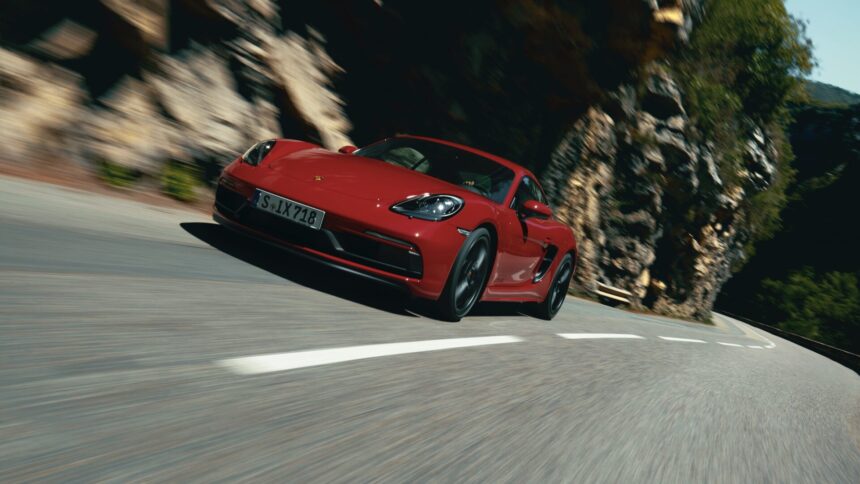 If the modern trend for downsized engines with turbochargers leaves you cold, we’ve got some good news for you from Stuttgart today.

When Porsche introduced its all-new Boxster and Cayman models in 2016 — now called 718 Boxster and 718 Cayman — it also dropped the traditional flat-six engine from the line-up. In its place was a turbocharged four, and it didn’t exactly meet with universal approval.

We saw a slight reversal of the stance in 2019, for the new Cayman GT4 and the Boxster Spyder. Porsche dropped in the 4-liter flat-six from the 911 for these motorsport-derived range-toppers, which came in at a few notes either side of $100,000 depending on whether you preferred soft top or hard top.

Today, Porsche has revealed that six-cylinder power is filtering back down the range again, with two new GTS models that both use the 4.0.

In either case the engine is the same. It’s a 394hp Boxer six, slightly detuned from the otherwise identical unit in the 414hp GT4. That gives the GTS model a useful power hike of almost 35hp over the outgoing 2.5-liter turbocharged four, although torque remains roughly the same at just over 310lbft.

That drives the rear wheels through a six-speed manual gearbox, with a 0-60mph time of around 4.3 seconds — only a tenth behind the GT4 and Spyder. Top speed comes down 6mph to 182mph, which is still plenty quick enough.

Officially the six-pot hurts the GTS’s eco credentials. Rating at 246g/km in both cases, the GTS 4.0 is 36g/km worse off than the GTS 2.5, equating to 21.8mpg US (26.2mpg Imp) compared to 27.6 (33.2) on Europe’s WLTP cycle. However, the six has a number of tricks for efficiency, including the ability to switch off the cylinder banks alternately at low engine loads. The sports exhaust also features the gasoline particulate filter (GPF) from the GT4.

The GTS is around three-quarters of an inch (20mm) lower to the road than the entry level models, with Porsche Active Suspension (PASM) as standard. There’s also the option to lower it by another 10mm with a further sports suspension pack. Active drivetrain mounts, a torque vectoring system, and a mechanical LSD are all also part of the standard GTS specification.

Porsche fits large, 20-inch, ‘light-alloy’ wheels, finished in a satin-gloss black. These cover the huge 13-inch front discs and 11.8-inch rear discs, with four-piston calipers (finished in red, of course) on each axle. You can opt to upgrade to a ceramic composite brake system — with 13.8-inch discs on both axles and six-pot front calipers — if you choose.

There’s a number of small details to differentiate the GTS from more ordinary, four-cylinder cars, largely centering on black. Darkened bits on the spoiler lip, air intake, and light covers will give it away if you’re looking closely enough. A peek into the cabin will reveal lots of GTS emblems, and carbon trim elements to help make the distinction.

Porsche is yet to announce US-market prices just yet, but the cheaper Cayman GTS comes in at €81,926 in Germany and £64,088 in the UK — putting it in the $85k-$90k region. The GTS models will be available in Europe in March, and North America later in the summer.

Porsche
9 Comments Discuss this post in our forums...
F1 2020 Review: A Winning Formula