The latest model in the Porsche 911 GT range has arrived, in the shape of the new 992-generation GT3. Boasting the usual race car-derived technology, the GT3 represents the entry level of Porsche’s highest performance 911s, and it’s quite the high bar for the subsequent models.

As is fairly standard for the GT3, the 992 car sports a wider body than the regular models in the range, and wider even than the previous generation car. It’s grown slightly longer too — by just under half an inch — but despite the larger body and wheels, the 992 is only 11lb (5kg) heavier than its predecessor at 3,188lb (1418kg).

That’s achieved with an array of lightweight measures, which include a front hood in carbon-fiber reinforced plastic, forged alloys, a lightweight exhaust system, and lighter windows. The exhaust system alone cuts some 22lb (10kg) from the vehicle’s weight. If that’s not enough, customers can opt for a bare carbon fiber roof should they choose. 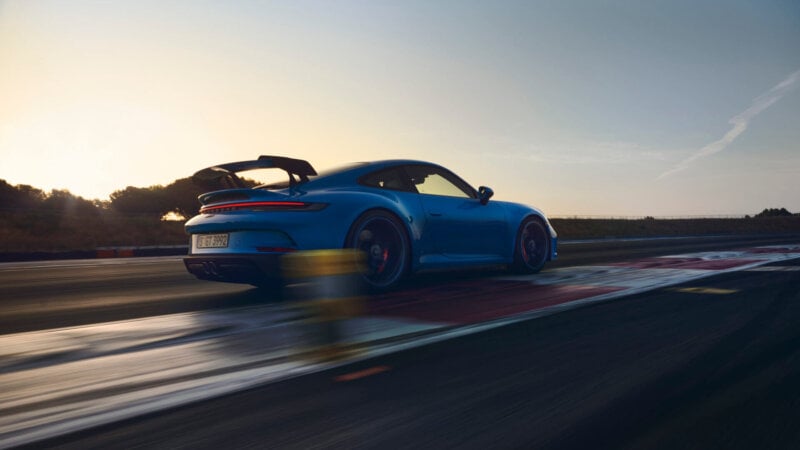 To offset the very marginal weight gain, the 992 911 GT3 gets more power than before too. The six-cylinder boxer is based on the 911 GT3 R endurance racer, and will be almost unchanged when its used for the future GT3 Cup race car based on this model. It’s a naturally aspirated four-liter unit, producing some 503hp and spinning up to over 9,000rpm.

Porsche has widened the front track of the 992 compared to the 991.2, along with fitting wider front tires than before. Unexpectedly, the rear track is slightly narrower, by just 2mm, but the rear tires are also wider than before. The car retains the rear-wheel steering setup we’ve previously seen in GT3s.

The final part of the enhancement package is the aerodynamics. A swan-neck rear wing and diffuser derived from the 911 RSR increase downforce compared to the previous car — though Porsche hasn’t provided any precise figures — and both feature manually adjustable elements in case you want to head down to a track day. 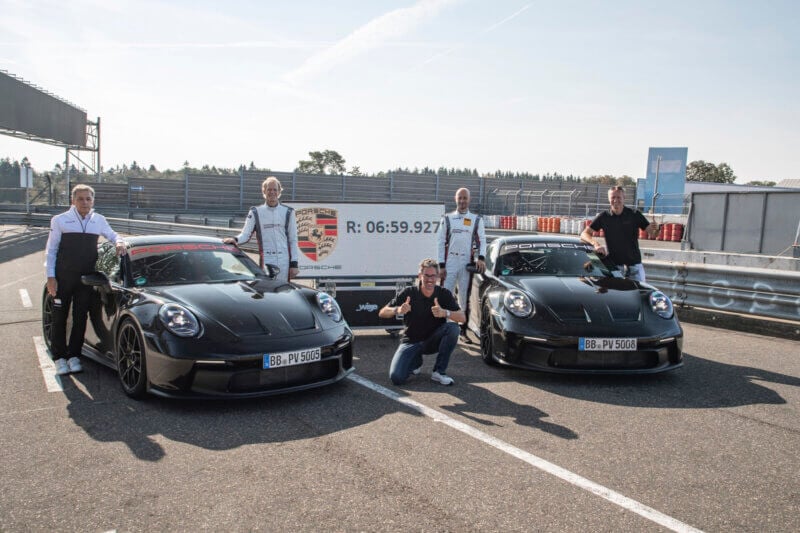 All that put together makes the 992 GT3 the best-performing GT3 model ever made. In pure straight line performance it matches the old car’s 0-60mph time — 3.2s for the PDK-equipped model — but reaches 199mph, 1mpg faster than before. Unsurprisingly then, the 992 GT3 eclipses the 991.2 GT3 at the benchmark Nurburgring Nordschleife lap, but it also beats the old GT3 RS.

Porsche hasn’t yet revealed a US-market price for the 992 GT3, but it’s likely to be in the region of $145,000 for a six-speed manual and a little more for the seven-speed PDK; Porsche GB lists the car at £123,100. Deliveries will start this May.