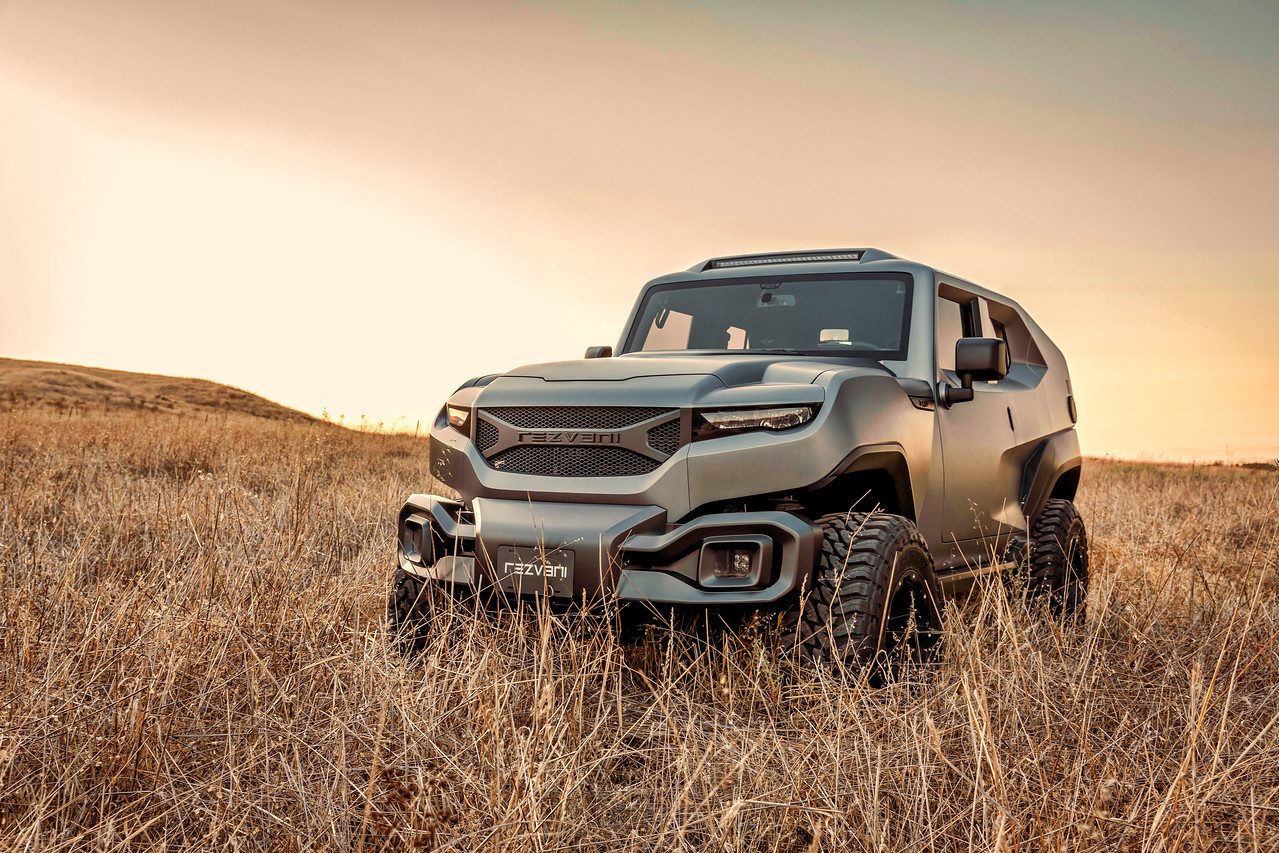 Are you ready for the impending zombie apocalypse? Chances are you aren’t. Thankfully the Rezvani Tank will give you all the zombie smashing power you could ever want.

Rezvani might be a company you’re not familiar with, but it’s no stranger to making some rather extreme vehicles. Based out of Irvine, California, Rezvani is the brainchild of Ferris Rezvani who started off as a designer at the Dutch supercar maker Vencer. He also lent his talents to both Ferrari and Aston Martin over the years. As a result, Rezvani is no stranger to penning some fantastic designs.

The company first entered the scene with a highly modified Ariel Atom known as the Beast. Since its release in 2014, several other variants hit the market with ever increasing power. The newest model, the Beast Alpha, is a 400 hp supercar with some bizarre doors and gold heat shield surrounding the engine. It’s excessive but awesome.

Now Rezvani wants to try its hand at an off-road vehicle.

Loosely based on a Jeep Wrangler platform, the Tank might be one of the most extreme off-road vehicles on the market today. Blending civilian comfort with military toughness makes for something more than your standard SUV. This is why Rezvani says the Tank is in a new class, the XUV, which stands for Xtreme Utility Vehicle. There’s no disagreement from us about that.

Using an SRT derived 6.4-liter V8 HEMI that powers the SRT Cherokee the Tank puts out 500 hp. This is nearly double that of the standard Wrangler with its 3.6-liter Pentastar V6.

There are two suspension options, both fairly extreme, that should make the Tank more than capable off-road. The standard package comes with a six-inch lift, Dynatrac 40/60 axles, and e-lockers. Also, the rig comes with Fox 2.5 shocks with a remote reservoir and 37 inch by 12.5 inch Toyo Open Country tires. Bumping up to the Extreme Off-Road Package beefs up the axles with Dynatrac XD60/80 with air lockers. You also get 37 inch by 13.5 inch Toyo Open Country tires and Dynatrac ProGrip brakes. 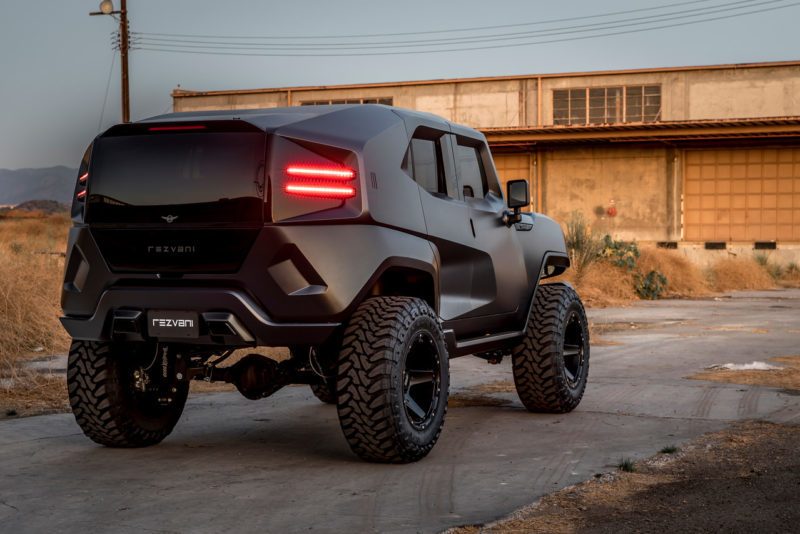 The other packages are where the already ridiculous truck gets a bit more ridiculous. If you are fearful of being shot at, you can opt for full Kevlar ballistic armor, bulletproof glass, and run flat tires. All of these are military grade to ensure ultimate safety.

Also from the military bin, you can get your Tank with FLIR thermal night vision camera. Per the website, it looks like it’s useful for hunting deer or trying to locate a possible enemy in a Ford Taurus.

Since the Tank needs to be as comfortable as it is extreme, other packages include a full leather interior, heads up display, and retractable running boards.

The exterior looks futuristic and very much like a concept car, however it works on some level. The integrated LED light bar on the roof is also a nice touch. It’s not tacked on like most specialty off-road vehicles and looks like it belongs there.

It’s definitely not a looker by any means though, but neither is the Wrangler.

For those looking for what might be the ultimate factory off-road vehicle on the planet, get out your checkbooks. Prices start at $178,000, however, once you start adding some options the price could easily climb past the $250,000 mark. This is still slightly cheaper than the Terradyne Gurkha though.

We look forward to seeing just how capable the Tank is once orders start arriving early next year.

Andrew Evans · Oct 10, 2017· Comments
Gran Turismo series partner Toyota has revealed a special, limited edition version of its Toyota Yaris hatchback, which not only bears the Gran Turismo 7 name but comes with a free copy of the game and a PlayStation 5 console.

Andrew Evans · Oct 10, 2017· Comments
After it surprisingly revealed a new car at the Consumer Electronics Show (CES) in 2020, Sony has taken the covers off a second model at this year’s show — and it looks like it might be planning to build them.

Andrew Evans · Oct 10, 2017· Comments
Porsche has officially taken the covers off its Vision Gran Turismo car, designed specifically for Gran Turismo 7 when it launches on March 4.

Andrew Evans · Oct 10, 2017· Comments
MG’s specialist design center, SAIC Design in London, has created a new concept car that’s not only inspired by gaming, but a games room itself.

Michael Leary · Oct 10, 2017· 13 Comments
Although Lamborghini has now officially pulled the wraps off its latest nostalgia project, the Countach LPI 800-4, you’re already too late to buy one.

Andrew Evans · Oct 10, 2017· 21 Comments
Genesis has unveiled a trio of new racing car concepts designed in collaboration with Gran Turismo, destined to take their places in the racing game series in the near future.

Andrew Evans · Oct 10, 2017· Comments
Nissan has taken the covers off the latest model of its flagship performance car, the GT-R Nismo, ahead of its market launch later this year.