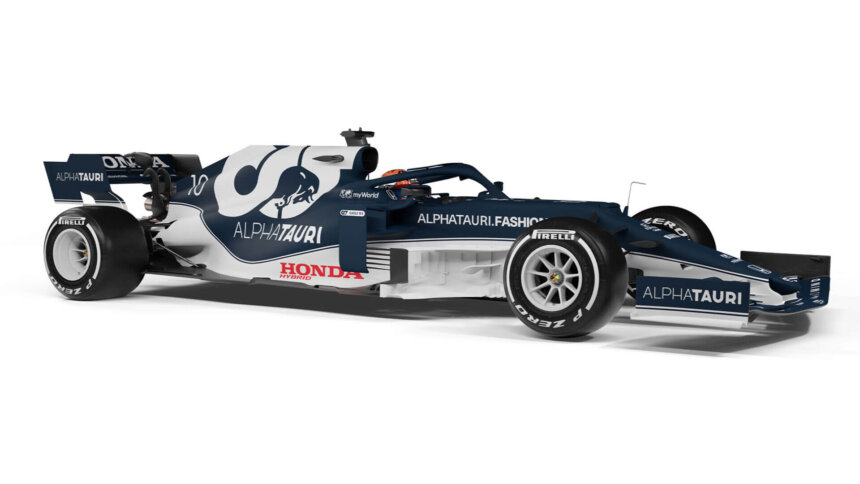 Red Bull’s junior F1 team, Scuderia AlphaTauri, has become the second team to reveal its 2021 challenger. The car, officially known as the AT02, follows on from last year’s race winning AT01, and AlphaTauri hopes it will propel the team to the front of the midfield.

Like much of the grid, the 2021 AlphaTauri is close to indistinguishable from the 2020 car. That’s thanks to the relatively static regulation set for the coming year, in part forced due to time lost in the mayhem of the 2020 season. However, there are a few changes to the technical regulations, centred on aerodynamics, which results in some subtle changes to overall vehicle design. 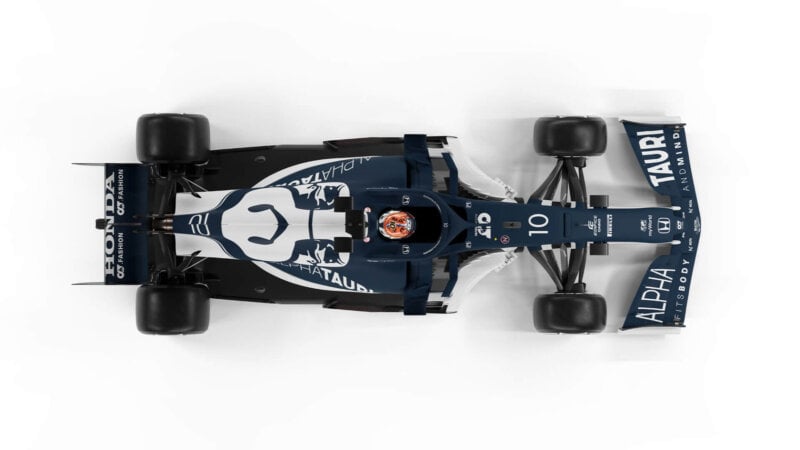 This is most obvious when viewed from above, looking at the floor towards the rear of the car. While the 2020 cars had a square shape, for 2021 the floor must taper in towards the rear. There’s also a regulation change which bans the longitudinal slots on the floor which, in combination with the new tapered floor, affects airflow around the rear tire.

While this is a mandated change, AlphaTauri has also made some developments elsewhere. The team has used its two development “tokens” — in essence an allowance for making major vehicle changes — to upgrade the front end, with a new nose and redesigned suspension in the region of the wheel uprights. There’s also an upgrade to steering components, to the 2020 specification as supplied by Red Bull under the terms of customer team agreements.

AlphaTauri will retain the Honda engine — in its final year in the sport — and Red Bull-supplied gearbox, along with the 2019-specification Red Bull rear suspension from the AT01. It’s also keeping the services of Pierre Gasly, who saw a return to form in 2020 and took an unexpected victory at the Italian Grand Prix at Monza.

Joining Gasly will be Japanese rookie Yuki Tsunoda. 20-year old Tsunoda has rapidly progressed into F1 after finishing third in F2 for Carlin last season, and ninth in F3 the previous season — scoring all of the Jenzer team’s points that year, including a race win. Tsunoda will race with #22, while Gasly sticks with his usual #10.

With only McLaren and AlphaTauri revealing their machinery so far, eight other teams are yet to show their hands. The current schedule is as follows:

2021 Formula One World ChampionshipAlphaTauri
201 Comments Discuss this post in our forums...
Test Your Badge Knowledge With Our Car Logo Quiz

FIA WEC 5 Mar 4 by Andrew Evans
The organizing body of the 24 Hours of Le Mans, the Automobile Club de l’Ouest (ACO), has announced that it is postponing this year’s race by a little over two…

Formula One 201 Mar 3 by Andrew Evans
Aston Martin will be making its return to the F1 grid this season after 60 years away, and has today unveiled the car it will use for the 2021 season.…

Formula One 201 Mar 2 by Andrew Evans
In the second of today’s two F1 car launches, the technically new Alpine outfit has revealed its A521 contender for 2021. It’s the first ever F1 car to wear the…

Formula One 201 Mar 2 by Andrew Evans
Defending seven-time world champion Mercedes-AMG has revealed the car that most will expect to take the 2021 title too. It’s called the W12, and no Mercedes hasn’t gone crazy and…

Formula One 201 Feb 23 by Andrew Evans
Red Bull is the latest team to unveil its car for the 2021 Formula One World Championship, taking the covers off the RB16B today. As the name might suggest, the…

Formula One 201 Feb 22 by Andrew Evans
The Alfa Romeo team has become the third to reveal its car for the upcoming 2021 Formula One season, which it calls the C41. As we’ve seen so far with…

Formula One 201 Feb 15 by Andrew Evans
McLaren is the first of the 2021 season F1 manufacturers to reveal its car for the year ahead, in an unusual event held at the brand’s headquarters in Woking, UK.…