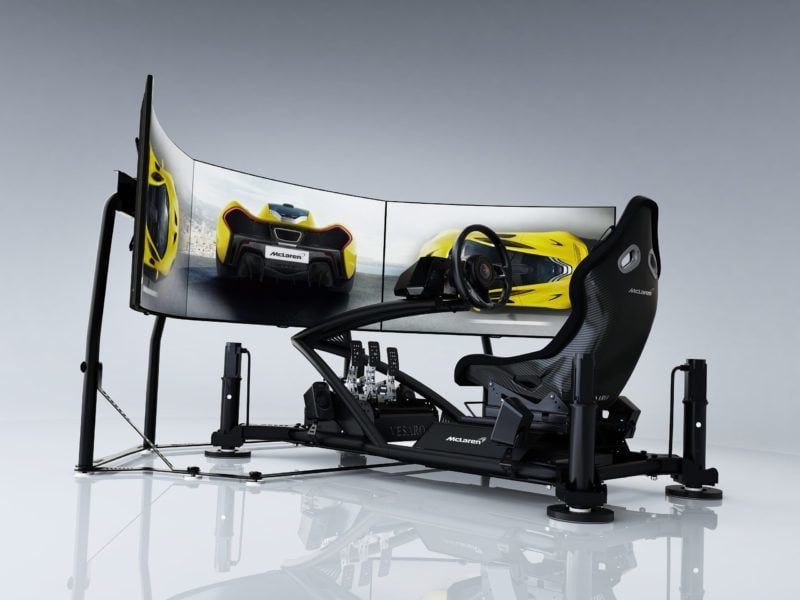 British simulator manufacturer Vesaro, known for its high-end offerings, has revealed a new range of products developed in collaboration with McLaren.

Mimicking McLaren’s road cars, the lineup is split into three categories: Sports Series, Super Series and Ultimate Series. As a result, the lineup kicks off with the Sports Series, just as it does in real life. This entry level model — if you can call it that — comes with a 46-inch display and a full complement of high-end sim racing equipment. Direct-drive wheel, aluminum pedals, integrated sound system; you name it, it’s probably included.

Taking the partnership one step further, the seats and steering wheels are the same units fitted to production McLarens. Furthermore, some seats even offer the full range of adjustments found on the real cars.

Moving up through the ranks bring more goodies, with more powerful PCs and triple-screen support. Graduating to the Super and Ultimate offerings also includes unique support tiers, more robust hardware, and lots of carbon fiber. As a result, Vesaro promises the most authentic McLaren experience around outside of owning the real thing.

The look and feel of Woking’s supercars aren’t the only aspects the Vesaro lineup apes. Because of the high-quality nature, the lineup starts at £24,549 and stretches all the way to a shocking £83,549. Naturally, this puts the products out of range for all but the most well-heeled clients.

Despite the sticker price, it’s great to see another entry in the sim hardware market. Hopefully, McLaren’s extended efforts to get noticed in the community will spur more businesses to follow suit — perhaps at a more accessible price point!

This collaboration with Vesaro comes off the back of a recent partnership announcement between McLaren and Logitech. Plus, The Woking-based company also announced the World’s Fastest Gamer competition earlier this month. All of this shows how eager the Formula 1 giant is to become a respected player in the sim racing community.

Andrew Evans · May 17, 2017· Comments
Fanatec’s direct drive Gran Turismo DD Pro is available for customers in Europe and the USA to order again, with first deliveries expected in or before February 2023.

Michael Leary · May 17, 2017· Comments
In news that is sure to make the holidays a bit more festive, Sony Interactive Entertainment president Jim Ryan has announced that the console shortage woes that have plagued the PS5 since launch are now resolved.

Andrew Evans · May 17, 2017· Comments
Serious sim racing can be an expensive business. Sim racing kit will set you back hundreds of dollars — or more — and that’s without considering a sturdy place to mount it.

Andrew Evans · May 17, 2017· Comments
After more than a year of waiting, Thrustmaster has finally revealed its new Direct Drive wheel: the T818.

Andrew Evans · May 17, 2017· Comments
If you’ve been waiting to get your hands on the official wheel of Gran Turismo 7, the Fanatec Gran Turismo DD Pro, now might be your chance as Fanatec is once again carrying stock — but you’ll need to be quick.

Jordan Greer · May 17, 2017· Comments
Logitech has just revealed the G PRO Racing Wheel, and it’s a product I never thought it would actually make. The company has a long history of producing reliable, entry-level sim-racing hardware, but it has always ceded the higher-end of the market to companies like Thrustmaster and Fanatec. With this new direct-drive wheel, all of that changes in a pretty big way.

Andrew Evans · May 17, 2017· Comments
In a surprise shot across the bows of high-end driving wheel manufacturers, Logitech has announced its new direct-drive G PRO wheel — and it will be available from today, for both Xbox and PlayStation.