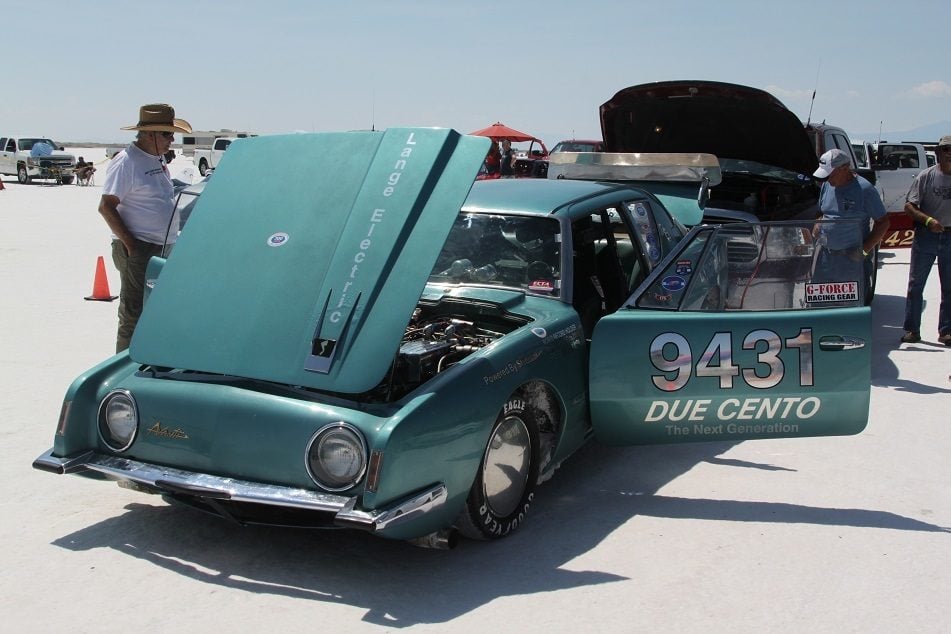 Like many of you, we’ve taken to Route X in Gran Turismo 6 in a quest to fuel our need for speed. But, what if there was a place where you could actually see and experience cars eclipsing the 300 mph mark? We set out to find such a place and ended up at Speed Week 2017 at the Bonneville Salt Flats.

What Are the Salt Flats?

The Bonneville Salt Flats sits about 100 miles west of Salt Lake City, Utah at the edge of the Great Basin. It’s surrounded by The Great Salt Desert and the Silver Island Mountain Range. By any measure, it’s in the middle of nowhere and is completely lifeless due to the salt.

The Flats span for roughly 40 square miles from the northern edge of The Great Salt Lake to the Utah-Nevada state line.

They are the remains of a long lost inland sea dating back to the Ice Age. Lake Bonneville spanned more than 20,000 square miles and was nearly the size of Lake Michigan. It formed about 32,000 years ago and existed until roughly 14,500 when a massive flood into Idaho drained the lake.

The Flats consist of a layer of minerals that resembles standard table salt. The crust measures anywhere from a quarter of an inch to over six feet in some areas. It’s densely packed and extremely flat which makes it perfect for racing. 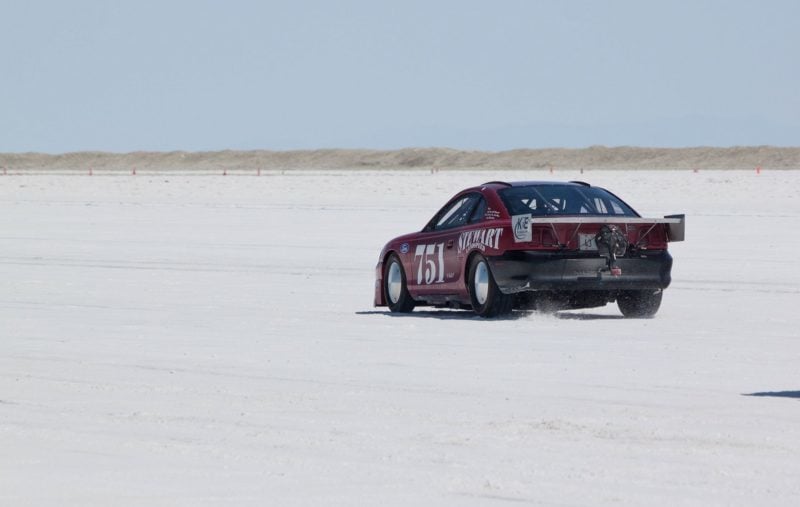 History of Racing at Bonneville

In the late 1890s the first speed run took place thanks to a publicity stunt by media mogul William Randolph Hearst. Hearst hired Bill Rishel to see how fast he could ride his bicycle across the Flats. Setting out in the early morning Rishel and his friend Charlie Emise took just 22 hours to make the 100-mile journey.

In 1907 Rishel returned to the Flats with a Pierce-Arrow to make the first known trek across the flats by car. Other attempts continued throughout the early 1900s to determine if racing could be suitable at Bonneville.

It wasn’t until 1914 that the Flats saw its first land speed record. Indy racing driver Teddy Tetzlaff piloted a Benz & Cie Blitzen-Benz to 141 mph over the salt. From that point on racers all over the world caught “salt fever” in the quest for higher top speed.

Until 1935 everyone at the Flats couldn’t break the elusive 300 mph barrier — then Malcolm Campbell came along. With his Campbell-Railton Blue Bird packing a 36.7-liter Rolls-Royce V12, Campbell clocked a flying mile speed of 301.129 mph.

Throughout the 1960s racers switched from piston engines to turbines in the quest for higher top speeds. In 1965 Craig Breedlove used an F-4 Phantom jet engine to power his Spirit of America car to just over 600 mph.

Finally, in 1970, Gary Gabelich set the fastest ever speed by a land-based vehicle at the Salt Flats. Using a rocket-powered, three-wheeled vehicle dubbed the Blue Flame, Gabelich clocked 622.407 mph in the flying mile. While this record has since been broken by other vehicles, none of them managed it at the Flats.

Speeds are slower today thanks in part to a shorter track. Throughout the early days of Salt Flat speed trials, the course typically ran nine miles. Unfortunately, as the Flats deteriorated over time due to mining, the course switched to a five-mile strip. 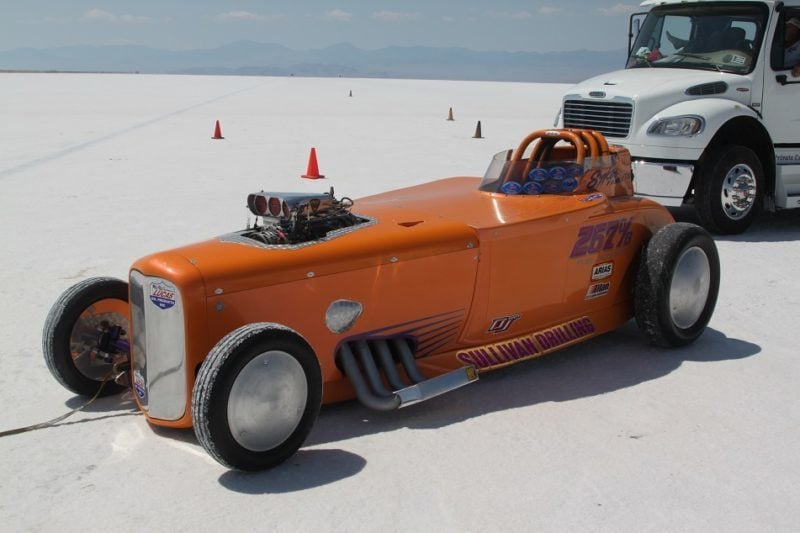 We headed out to the Bonneville Salt Flats on August 15 to take in a day of high-speed action. The weather was perfect and the smell of high-octane fuel hung in the salty air. The sound of distant thundering V8s hitting 200 mph echoed throughout the flats. This truly was the Temple of Speed that we’d been looking for.

Once leaving the access road, the drive to the spectating area is about four miles over the salt. It’s extremely bright due to the reflective properties of the salt and mirages are common. Peering off into the distance makes you feel like you’re about to drive into a large body of water.

Initially, finding a place to set up for the day had its challenges. For safety reasons, spectators can be up to a half mile away from the racing action. This means you need either a set of binoculars or a good telephoto lens to take in the action. Thankfully, you can tune into 88.3, Salt Flats Radio, to listen to everything that’s going on and know who’s on the track.

We found a place near the final three-mile timing gate and just took it all in. After chilling there for about 15 minutes a car spun out on the track and a few seconds later a tire came whizzing past only a few feet from our truck. This stark reminder showed that even spectating a motor race has risks, and made us think twice about our spot. We packed up and looked for a safer location further up the track.

Since there’s no real sense of space out on the Flats, it’s not easy to always find where you are going. Thankfully with some help from officials, we found a place near mile marker one to watch the racing. 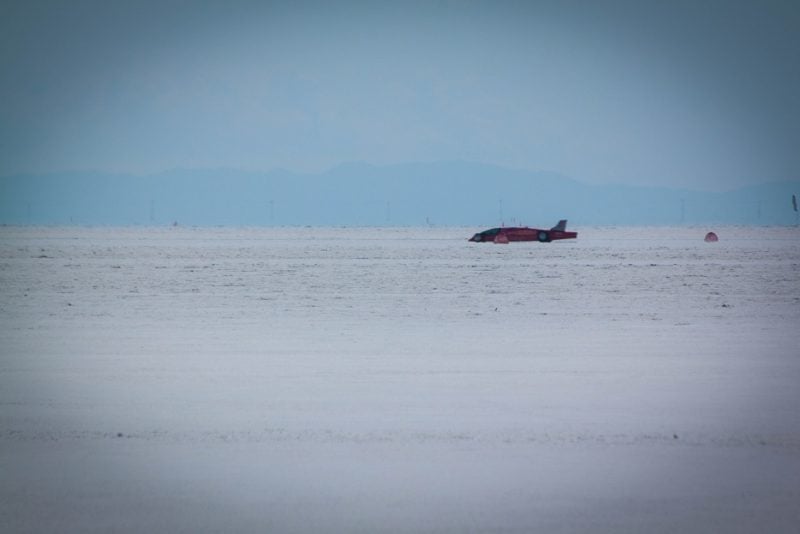 We were still being too far away from the racing action to really see anything. Nonetheless, we got to see the competitors making their way to the starting line. This gave us ample opportunity to at least check out some of the vehicles as they rolled past, usually towed behind a truck.

After a lull in the action due to an exploded transmission that left parts strewn across the track for nearly two miles, we went in search of another place to view the races. Aimlessly driving across the salt, we finally found the spectating area at the starting line. This gave us the chance to really be up-close and personal with the vehicles.

Walking around the starting grid we saw everything from purpose-built long nose racers to late model muscle cars. You truly can run anything you want at the Salt Flats as long as it can pass tech inspection. 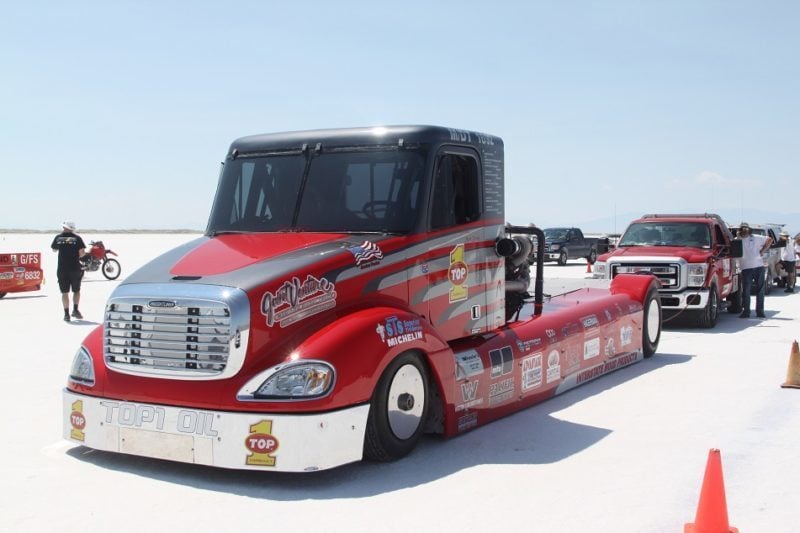 Our favorite vehicle by far was this 1997 Freightliner by Joint Venture. It’s 24.1-liter Detroit Diesel V16 engine sports four massive turbochargers. Power output is well over the 4,000 hp mark and can push the 20,000 lb truck to deep into the 220 mph range.

By the end of Speed Week 2017, the Joint Venture team managed a top speed of 224.57 mph. Not its fastest run ever, but still amazing considering it’s a semi truck. Respect. 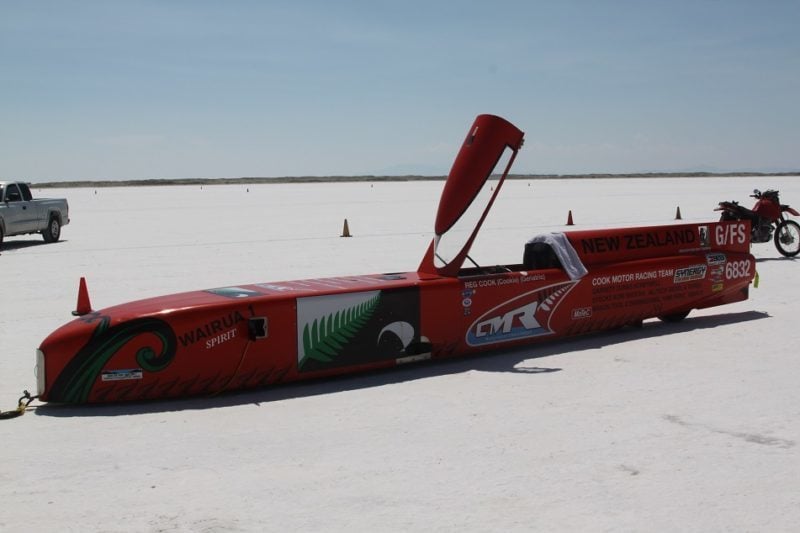 Another favorite of ours came from the Kiwis. The Wairua 1 from Cook Motor Racing (CMR) made the trek to Utah all the way from Auckland, New Zealand to conquer the Salt Flats. Along with its sister car, a highly modified Nissan NX dubbed Cookie, the CMR team is a fan favorite at the Flats.

After several runs and tweaks, the Wairua 1 came away from Speed Week 2017 with its fastest run ever at 260 mph. Unfortunately, Cookie was plagued with gearbox troubles and only managed a 184 mph pass before retiring.

The experience of Speed Week 2017 could only be described as epic. Seeing such a wide variety of cars top incredible speeds is a motorsport like nothing else around. If you’re ever in need of a bucket list motorsports trip, we highly recommend heading out to Bonneville. Sanctioned events are either Speed Week in August or the World Finals which takes place in October.